NEW YORK, NY—Good Charlotte is a band I hate to love. Oh come on, everyone’s got them. Bands you’re too embarrassed to admit feature among your top 20 even though every time you listen to them they get you lip syncing, moving and making you feel pretty darn good. Well, the boys from Maryland proved just why they have, and will continue, to feature prominently on my secret ladder at their gig at NY’s Roseland Ballroom. I mean really, when a band creates catchy hook-filled pop-punk music, what’s not to like? 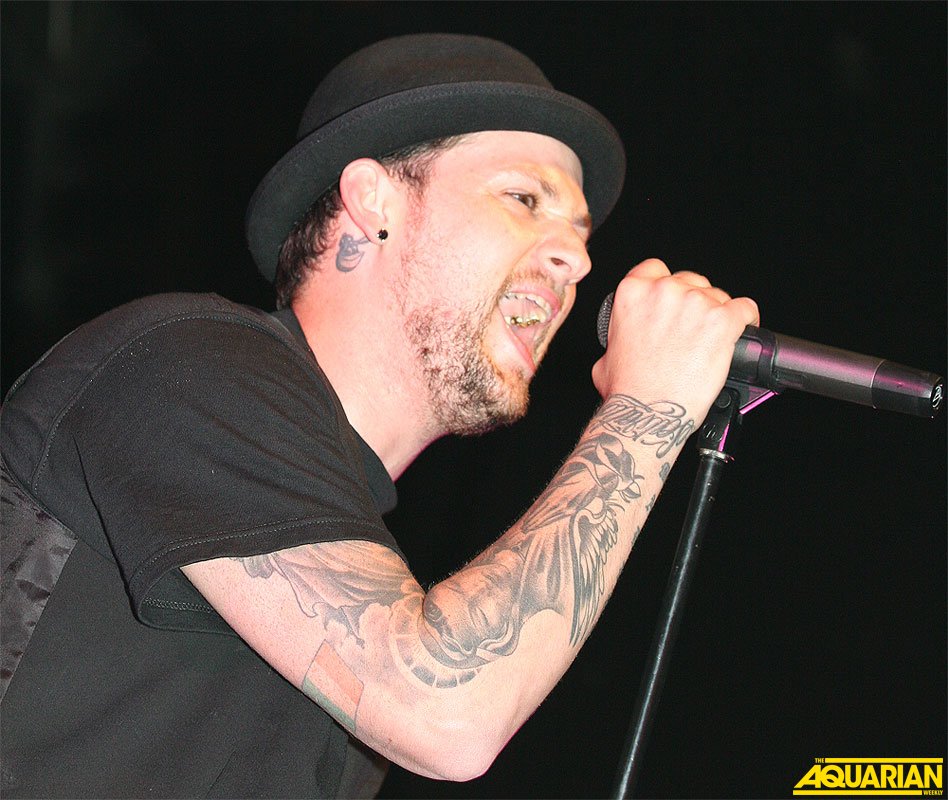 Don’t get me wrong, you can’t expect miracles from GC. Their lyrics totally lack depth and meaning, even though they try their hardest to get insightful and deep. With poor attempts at somber songs about life being black, or a dad who ran away, the reality is, with a frontman who dates Hollywood’s glam girl Nicole Richie, nobody is ever going to award their tracks the sympathy they seek. Opening with one of their most successful hits, “Anthem,” lead singer Joel Madden and twin brother, bass player and backing vocalist Benji, immediately set the stage for the atmosphere of their gig—lots of dancing, jumping, crowd screaming and sing-alongs.

Other fan favorites were “Girls & Boys” and “The Young And The Hopeless,” during which Joel dived head-first into a mob of puberty-stricken female teens. Very brave! “Dance Floor Anthem,” off their most recent release Good Morning Revival, was my highlight because the band veered away from its studio sound, and changed the tone and pace of the track, even adding new harmonies. But all in all, they played too much old stuff. Often, when a band digs into its archives and pulls out long-forgotten ripper tracks, it’s considered a treat. But GC’s songs aren’t like fine wines—they don’t improve with age.

It just made it clear these boys desperately needed new songs so it was a huge relief when they told the crowd they were working on material for a fifth record. But there’s no denying that after more than a decade and four albums together, they know how to put on a good show. Seeing them at Roseland was my second GC experience and the beauty of this band is that you’re always guaranteed a stellar performance. Joel is a frontman who performs right into the palm of the audience’s hand and in return gets some of the loudest cheers I have ever heard. It’s clear these boys have a pattern—a recipe for success—and the truth is, seeing it more than once makes it a bit tiring. The way they prep the crowd seems like routine. Because they have done it for so long, they know exactly what tricks to use to ensure their records and merchandise keep moving off the shelves. While I find this lack of creativity and effort slightly disappointing, I think I’m being too harsh. I need to remember that Good Charlotte is a pop band, after all. With strong and distinct rhythms, very catchy melodies, sing-song lyrics and prominent guitar riffs, they do make great pop music. And whether they realize it or not, they also offer fans humor and a twist or irony.

They closed with “Lifestyles Of The Rich And Famous,” a song that bags out celebrities and the wealthy. It’s more of a joke than anything else to see they’re still even singing this song considering Joel is fathering the baby of one of Hollywood’s biggest princesses. GC is a contradictory band and always will be. I say, keep doing your thing boys. We all need bands who provide us with comic relief as well as neat tunes. I love to hate to love you.