NEW YORK, NY—Cobra Starship finally answered the biggest question mark that’s surrounded the pop punk outfit since Samuel L. Jackson first came face to face with a plane full of deadly snakes back in 2006. The band does not take itself seriously. Phew! At last, I feel like these locals, who shot to fame by creating a song based around the huge Hollywood flop Snakes On A Plane, finally deserved the piercing cheers and screams that came from the capacity crowd at their Nokia Theatre gig. Clearly overwhelmed and totally excited to be celebrating his 29th birthday on the same day as their NYC show, the very colorful, comical and extroverted frontman, Gabe Saporta, couldn’t get this words out quickly enough. “Holy fucking shit guys,” he said. “I’ve got so much to say I don’t even know where to start. It’s awesome to share my birthday with 2,200 of my closest friends.” 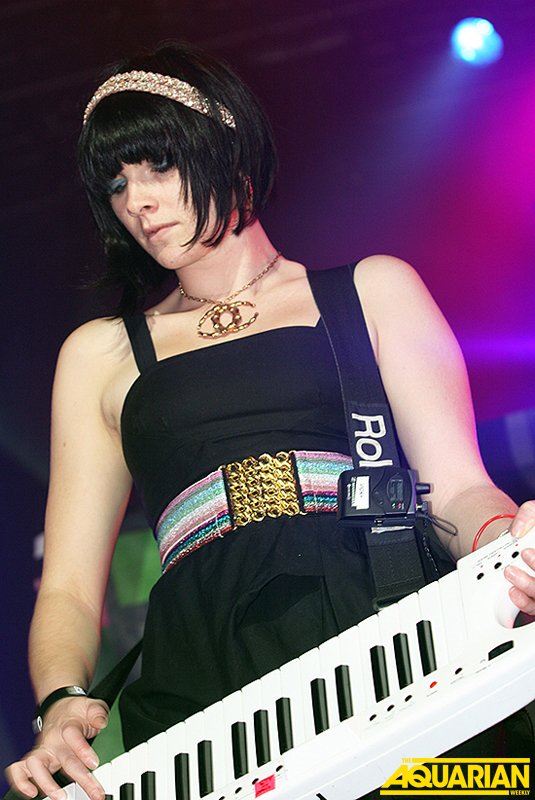 Despite having two albums under their belt, and a bank of local and international shows on their list of achievements, Saporta said until now the quintet had always been the underdog band, playing mostly half hour or supporting sets. This Sassy Back tour marked their first as the leading act but this didn’t mean their satirical, tongue-in-cheek approach had changed. “Headlining implies too much fucking professionalism and we’re not professional,” Saporta said. Guitarist Ryland Blackinton backed this up, telling the crowd they preferred to view their role as “shredlining” instead of headlining. Opening with “The Church Of Hot Addiction,” the crowd went wild from the word “Go.” Prancing and parading around stage, Saporta was the perfect frontman, injecting life to each and every track with facial expressions and zany hand and body movements.

Fan favorites were a mixture of Cobra’s old and new songs; “Send My Love To The Dancefloor, I’ll See You In Hell (Hey Mr DJ),” “Smile For The Paparazzi,” “Prostitution Is The World’s Oldest Profession,” “Kiss My Sass,” “The Ballad Of Big Poppa And Diamond Girl,” and of course, “Bring It (Snakes On A Plane).” Needing little encouragement, every member of the crowd raised their arms and made “the fang” hang signal—but before the band broke into the snake song, Saporta spilled the beans. “After this song we were supposed to disappear,” he said. “We thought it was a joke… and we shared it with you guys. And you all get the motherfuckin’ joke.”

While I’m quite certain his comments went over the heads of most of the pre-pubescent fans surrounding me, this was the confirmation I was waiting for. It makes it so much easier to digest—and enjoy—a ridiculous piss- take song, and a band that lacks all meaning and depth, when you know their intention is simply to have a good time. Saporta repeatedly thanked the crowd for their support and had plenty of mid-track conversations. “I know I’m talking a lot but it’s my birthday so I can do whatever the fuck I want.” The band changed outfits for the encore, Blackinton performed a solo electronic track mixed live on stage, and Cobra left its fans with a very sweet taste of a killer version of “Guilty Pleasure.” It’s refreshing to see a band that has made it—big time—but doesn’t take itself too seriously. Saporta gave fans exactly what they wanted, plus more, and it was obvious this wasn’t only a special gig for him, but also for everyone else at Nokia Theatre. “Thank you guys, I’m so grateful,” he said. “I swear to god this is the best birthday I’ve ever had.”