NEW YORK, NY—As the members of the St. Louis band Ludo ran onto the stage at the Highline Ballroom, the theme from The Neverending Story was billowing from the speakers. Not only did this rouse a cheeky smile as it stirred my brilliant childhood memories of Atreyu and Falkor, but it set up the quirkiness of the gig from the get-go. When it comes to this crazy group, however, it seems no theme song—no matter how wild—can really do these guys justice. 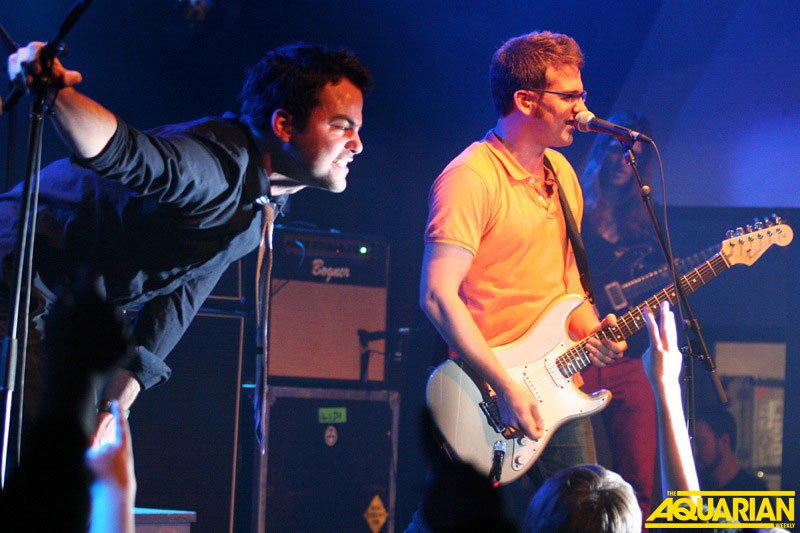 Opening with “Part 1: Broken Bride,” from their rock opera EP, the band’s trademark facial expressions, eccentricity, energy and outlandish approach to their music was on full display. Every single part of their show was a mini performance; from the amusing crowd banter, right down to the elaborate and dramatic tuning of their guitars. I know from first-hand experience that frontman Andrew Volpe and his crew are incredibly intelligent. So the question this raised was whether these guys are natural entertainers, or whether in fact every move they made was carefully orchestrated to have maximum impact. Ultimately, I’m not sure it really matters.

It’s often frustrating as hell when artists pretend to be something they’re not—insightful when they’re shallow, complicated when they lack layers—but when the intention behind every move of a band is simply to entertain, well, that gives them the right to serve up whatever they want, however they want. And Ludo did. And trust me, these geek rockers are so much better in the flesh. Volpe’s zany stage presence is something that doesn’t completely come through on their studio recordings. His voice is better live, the band’s killer harmonies are much more prominent, and the levels of crowd participation—and energy—they incited, were simply impressive. Keyboardist Tim Convy made an excellent runner-up frontman; he’s animated and enthusiastic, and to all the ladies out there, he’s pretty good eye candy, too. While they both made plenty of wisecracks through the entire gig, the humor highlight for the night came at encore time.

The band waved goodbye and the lights went out, but nobody moved. For several minutes, while the crowd was cheering and roaring, the group stood frozen, dead still, in the dark. When the venue finally lit up and Ludo broke into song, fans went absolutely mad. Highlight tracks included “Go-Getter Greg,” “Love Me Dead,” “Lake Pontchartrain,” and “Save Our City.” Now, I can’t finish this review without drawing attention to Volpe’s swearing. Don’t get me wrong, I’m not offended by cursing—at all—but Volpe swore more than any other frontman I have ever seen. Not only did the band get the entire crowd chanting a massive “Fuck you,” but I can’t remember the last time I’ve heard “fuck” repeated so many times during a single show. My guess is that in crazy Ludo land, swearing might be some bizarre form of affection? Let’s hope so. Either way, Ludo deserved to be the headlining band at the Highline Ballroom.

So many artists nowadays opt for the serious, moody and depressing musical pathways to win over people’s hearts, and frankly, it’s getting tiring. Ludo is creative and full of life, and just because they touch on themes through tales of terrifying road trips, deadly and carnivorous relationships, and desperate police officers looking for love, don’t confuse their eccentricity with simplicity. My Neverending Story memories are sparked every couple of years, and when I have them, I try to hold onto them for as long as I can. Ludo already stood out in my music collection because of their point of difference, and now they’re forever going to be associated with my feel-good childhood memories of Bastian, Fantastica and The Nothing. If that’s not incredibly intelligent, I don’t know what is.