NEW YORK, NY—Ida Maria’s gruff and tough, and she’s the type of chick you wouldn’t want to accidentally run into in a dark alley—or get trapped in an elevator with. But when she’s up on stage, and you’re at a safe distance away in the crowd, this Norweigan rock goddess shines like an absolute star. While she might have only released her debut record, Fortress Round My Heart, last year, it hasn’t stopped the European songbird from acting like a true professional. While she can, at times, sound like a bit of a tortured soul, who’s either barking, bitching or just generally mouthing off on issues like loneliness, self-confidence and sleeping around, Maria’s funny, she’s got flair, and most importantly, she beams with an I-don’t-give-a-shit attitude that couldn’t have made its way into the music scene at a better time. 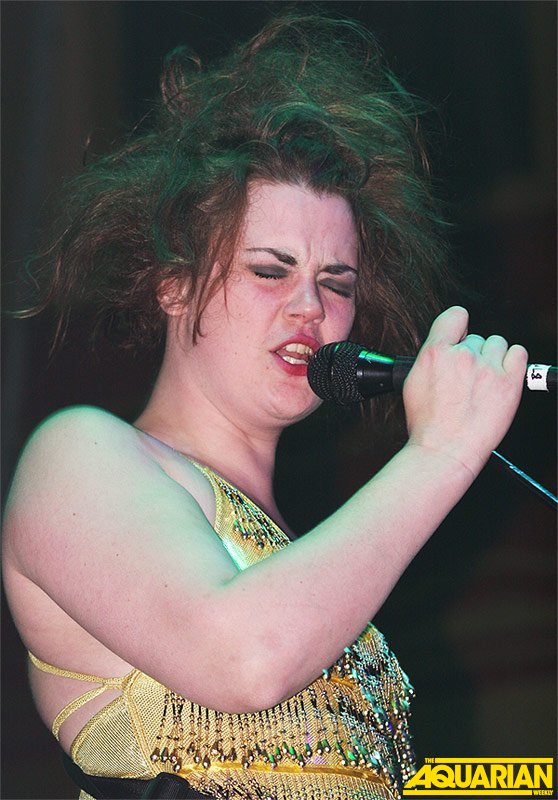 While we’re only in the very formative stages of what’s destined to be a pretty colorful journey for Maria, she already knows how to play with—and manipulate—her music to serve up exactly what the crowd is after. As the opening act for Glasvegas at Webster Hall, Maria proved she has a knack for owning the stage and executing to perfection, as she successfully changed the tone and tempo of her songs to sound markedly different from her studio recording. This, for an artist who is only one-record young, is an impressive feat at a live show. Maria’s throaty and somewhat screechy voice turns out being much stronger and more seductive in person, and her stage presence—while it leaves a lot to be desired in terms of presentation—is real. And nobody can fault her for that.

Her performance was not limited to her music, and Maria showed there’s much more she can offer than simply her tunes, as she served up a neat dose of theatrics during one of the best-performed songs of the night, “I like You So Much Better When You’re Naked.” Other killer tracks of the night were “Louie,” “Forgive Me,” and “Stella.” Maria, known for being outspoken on a variety of issues, didn’t really have a lot of banter with the crowd and in the process didn’t offer any more insight into who she is outside of her songs, but I guess as an opening act you have to limit what you choose to serve up. Her laid-back approach made the entire room feel at ease, and what made her performance even more wholesome is that it wasn’t just Maria radiating this easy-going attitude, but the boys that backed her on stage also looked like naturals who, if given half a chance, were likely just as reckless as the songstress herself. Ida Maria might not be eye candy, and her voice definitely isn’t silky smooth or hauntingly beautiful—but this chick is honest. She delivers infectious, addictive and original punk-rock, and is proof that you don’t have to fit a certain style or look in order to make it in this business. Instead, she proves that the best way to win over fans is just by being yourself. While the main act was supposed to be Glasvegas, based on the size of the crowd Maria roused, and the cheers that were heard in-between each of her tracks, I would hazard a guess that for a lot of people at the gig, her performance ended up being their Webster Hall highlight. At album one, Ida Maria is already a star. I can’t wait to see what else she has in store and will be keeping a close eye on her. You should too.