BROOKLYN, NY—I’m going to throw a bunch of words out on paper, and I want you to think about how they are all connected. Okay, here goes: Costumes, glitter, pigs, wolf, masks, feathers, sunglasses, cartoons, music and party. Any guesses? I’ll bet you’re struggling to come up with an answer so I’ll make it easy for you. Two words: of Montreal. They’re daring, edgy, over-the-top, and out of this world. They blend pop, rock and dance with a whole heap of crazy, and in some bizarre “of Montreal universe” that the quintet creates on stage, all of these elements blend together perfectly. Well, maybe not all; the topless performers at the end of the gig came as a huge surprise. But overall, of Montreal delivers something pretty unique. Their music is awesome. It’s high-energy, melodic, and by it’s very nature rouses a positive atmosphere and spirit, but the band’s true magic—and the reason why they had three back-to-back, sold-out shows in Brooklyn—is because of their vision as a group, and the wild and entertaining journey they take fans on. 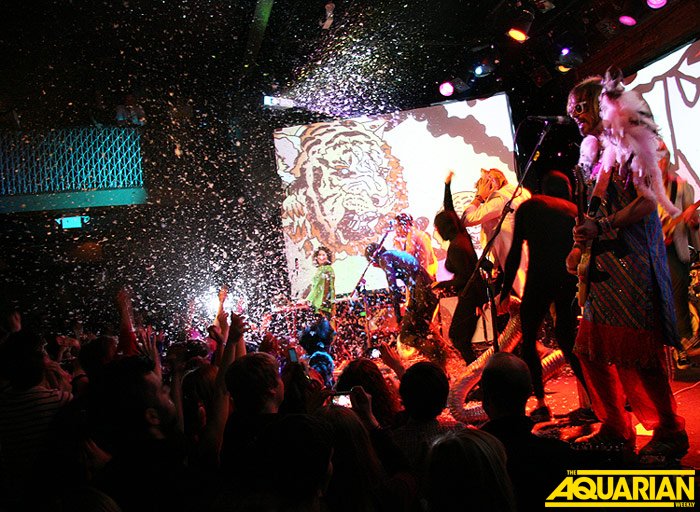 Their shows are not simple gigs, and their performances don’t slot perfectly into theatre. They hand-pick elements of both art forms to offer crowds an unforgettable ride. While blending music styles and flavors is more popular among artists now than ever before, of Montreal is in a league of its own. The five-piece, originally from Georgia, is creative, fun, experimental, talented, and shocking all at the same time. Their gig was a visual masterpiece which—while it could easily be viewed as overkill by some—stands out from the pack when compared the all-too-common four-piece stage set-up that dominates music nowadays, where the most interesting feature onstage is a band’s name tagged across a drum kit. After 12 years in the game and plenty of stylistic transformations along the way, of Montreal is still outdoing itself, and constantly wowing fans. For years, fans and artists alike have said the strongest and most powerful element of music is its escapism value, and often, the true test of great music is its ability to transport you to another time and place completely. It’s fair to say, through of Montreal’s entire set, fans were definitely taken far away from N 6th St. in Brooklyn, and into a world where the only way to feel sane was to be completely crazy. This group certainly has a gift and uses it in the best way possible.