NEW YORK, NY—On the walls of the rock clubs in Anywhere, U.S.A., chances are you will find a snapshot of how things went down on the streets where you lived. The story of Leroy Justice just happens to take place in New York City, but taped to the wall next to the cash register behind the bar, or hanging somewhere beyond the promissory notes that have been clawed into the enclaves of broken telephone booths, are photographs containing the memories of simpler times—much simpler than any I have ever known, when rock ‘n’ rollers dressed their part, and kicked it like ramblers looking for a fight, or a dance, or both.

Enter Leroy Justice—the last man standing on this path back to glory. No, Leroy Justice hadn’t just rolled out of the dustbowl and onto the stage for their set at the Mercury Lounge, with the newly-resurrected Hill Country Revue (a NMAS spin-off) and Illinois-favorites Backyard Tire Fire in tow, being dressed alike in their unique rustic apparel. Donning man-about-town vests and pork pie hats, Leroy Justice looked like they were just tossed off of some carny circuit that began somewhere just outside of Babylon. But, for those of us that know better, Leroy Justice has been preaching the good word to the people of Manhattan with their ferocious live shows for the better part of this decade—sowing seeds into the soil, not just here in New York, but all over God’s green Earth, which is the exact reason why Leroy Justice is possibly the best attraction in town right now. Leroy Justice aren’t a bunch of soft-handed Manhattan boys making time with the hand-me-down blues. No, sir. As sure as that bottle of Jim Beam that rests beside keyboardist Sloan Marshall’s rig, Leroy Justice are the bonafide ramblers that this town has been needing for so long. 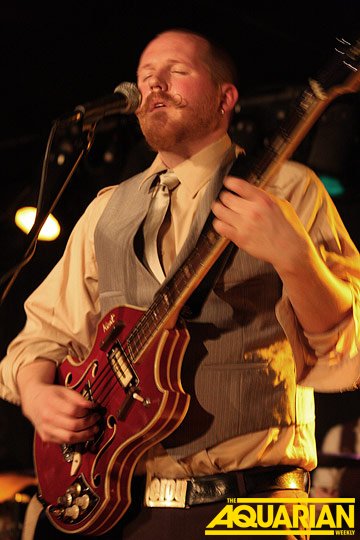 Celebrating the release of their long-awaited sophomore LP, The Loho Sessions (produced by John Siket—known for his work with Phish, Sonic Youth, Yo La Tengo, etc.), Leroy Justice eased into their set, allowing the crescendo of their opener, “Steel Girl,” reach its full peak at a pace of its own. This set the tone for a night where the band focused mostly on material from the new album, while slipping a raucous version of the title track from their previous effort, Revolution’s Son, into the set. Singer/guitarist Jason Gallagher howled into the black for most of the evening like his soul was saturated with snake-oil. With both the depth and sincerity that most front men cannot deliver, Gallagher quietly yet confidently rooted Leroy Justice in their very own conceptualized space and time, his voice piercing through the darkness without warning when moved by the haunting melody of songs like “Bathroom Wall.” What springs from Gallagher’s consciousness—every croak, every wail—is all the evidence one will ever need to know that he has lived these songs from the inside out, make no mistake about it.

There is no hoax before you when seeing Leroy Justice live, no gimmick to rest laurels on, and if you close your eyes ever so gently, you can live in the very same moment that the songs all summon. Just imagine what it would be like to be standing on the corner with Mickey, the central character to the song of the same name, drinking nickel beers with him and watching the world go by. This is where the music of Leroy Justice takes you, and I wonder if these are the same images that are conjured up in the minds of drummer Josh Karis, bassist Bradley Wegner and lead guitarist Brendan Cavanaugh as they play—all appearing so very lost in the moment. The translucent asphalt that paves the road home for Leroy Justice seemingly never gets twisted, and as their caravan spreads out even farther—in example, the step forward taken with The Loho Sessions from Revolution‘s Son—Leroy Justice looks more and more like a lock as the next, number one red penny medicine show set to blaze through your town. There even seems to be some coincidence in the fact that The Loho Sessions celebrates its release just days before the original circus—Phish—comes to town, given the album’s connection to John Siket. But at any rate, a master of ceremonies should have been standing outside of the Mercury Lounge prior to Leroy Justice’s set , crying out to all those on the sidewalks, “Please, for the sake of all things decent, step right up and receive the cure for what ails you!”

Yes, ladies and gentleman, this is Leroy Justice’s photo on the wall moment. Take it, and surely someone is bound to gaze up at it one day and be reminded of how things worked around these parts. Just how Springsteen and Neil Young were captured in their most creative moments, Leroy Justice is prime for the camera’s eye right now, and their music is prime for the soul.