NEW YORK, NY—I expected All Time Low to be exactly the same as every other up-and-coming pop punk group that hopped from stage to stage at this year’s Warped Tour. Sporting hipster outfits, colored glasses and too much hair product, these bands traditionally boast minimally insightful lyrics, plenty of hooks and surprisingly decent melodies. And they always rouse sizeable and noisy pre-pubescent crowds. While ATL doesn’t escape these elements, their gig at Roseland impressed me. The quartet from Maryland put on a quality of performance I would have expected from a more mature band. That’s not to say they don’t have plenty of issues that need ironing out; their lyrics are basic, musically they push very few boundaries and their image is something they’re still grappling with; they sing about girlfriends and partying but addressed the crowd with lines like “Let’s do it motherfuckers.” Ahhh, boys, hate to tell you but that kind of lingo doesn’t quite fit your tunes. 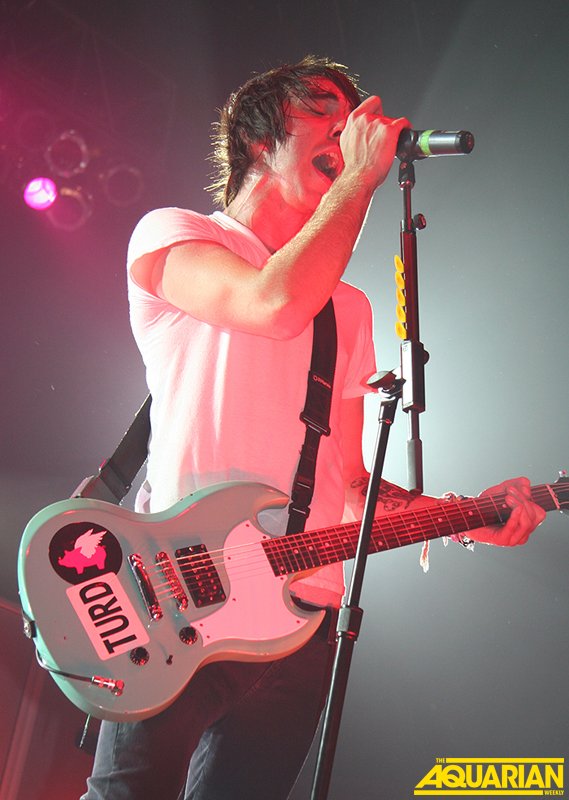 Ultimately though, their performance was a stellar one and it was blatantly obvious they were having the time of their lives on their first headlining tour of the U.S. “This is amazing—I got chills when I walked on stage,” frontman Alex Gaskarth said. “I can’t get over how many of you are here. I never in my wildest dreams ever expected this place to sell out. This is fucking incredible.” And with that, ATL delivered a show to remember. They bounced and frolicked around the stage and Gaskarth engaged the audience and his bandmates with the perfect dose of banter and chit chat. He oozed character and charm and roused the crowd at every opportunity with sing-alongs —“You sound amazing, sing louder”—and by pushing them to go as nuts as possible. “Are you ready for the dance party that’s about to go down?” he teased. “Are you sure?” But despite his charisma he has a lot to learn.

At one point he told the fans in the front to get a bigger moshpit going. I mean, who does that nowadays? And toward the end of the gig, Gaskarth asked the crowd to “please head over to the merch table and buy something for any of the bands” because he said they needed money. Come on kid, the country is in the middle of a recession—everybody needs money right now. I’m certain a more experienced frontman wouldn’t encourage young fans, who idolize him and probably used their parents’ cash for tickets, to indulge in even more of Mom and Dad’s dosh. Highlight tracks were “Shameless,” a very upbeat version of “Holly (Would You Turn Me On?),” a fast and passionate version of “Six Feet Under The Stars,” “Stay Awake (Dreams Only Last For a Night),” “The Beach” and Gaskarth’s slow and acoustic “Remembering Sunday.” The boys ended with a ripper version of “Dear Maria (Count Me In)” and made fans freakishly excited when they told them they would return next year with a new album.

Even though ATL won me over I wouldn’t say they’ve increased my confidence in the countless power pop acts who are desperately trying to make it. What I did learn though, is that I shouldn’t paint them all with the same brush. The true magic of music nowadays is all about what happens onstage and in this respect, these boys kicked ass. So I have to give credit where it’s due. Maybe the thousands of crazy and committed tween fans out in force for these types of gigs actually have more of an idea than I thought? Or maybe that’s giving them too much credit.