NEW YORK, NY—Cut Copy’s gig with Matt & Kim as openers was without a doubt, an electro-dance dream. And to be honest, I’m not sure who I was more excited for; the Brooklyn synth-pop up-and-comers, or the Aussie electro-pop masters. What was a certainty, however, is that no matter how much fun I or anybody else in the crowd was having, both bands looked like they were having much more fun onstage. 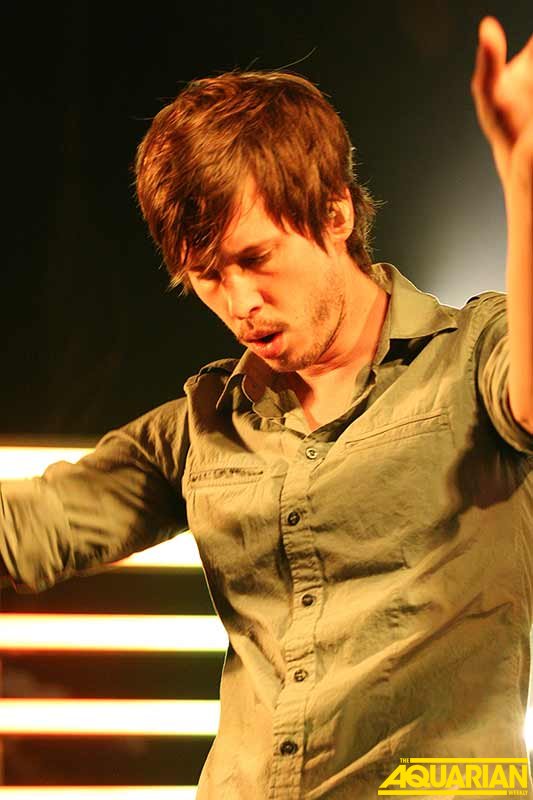 Matt & Kim, to start with, are unstoppable. They pranced, danced and jumped around the stage, and Matt, especially, cannot sit still. He was walking on his keyboard, jumping off his keyboard, and leaping onto it—and truth be told, I’m amazed both he and his keys made it out of that gig alive. The cute-as-ever boyfriend and girlfriend duo totally brought their beats to life, and looked like they were close to exploding with excitement in the process. The pair possess all of the qualities you would expect a successful Brooklyn band to have; charisma, talent and the perfect amount of spunk.

Matt & Kim hooked up in 2002 and started playing together in 2004 out of fun more than anything else. Matt learned the keys and Kim picked up the drums, and in a short time, they’ve both come one hell of a way. They’re totally in sync and do a pretty good job at crowd banter with exactly the right amount of get-up. “Tonight is about getting mother fucking dirty in here,” they yelled to the crowd. “Alright people, this is the business end of the set. It’s your last chance to go crazy with us.” Let’s hope this couple never breaks up—because their happy rock is simply too much fun to miss out on.

Now, onto the electro-pop veterans, Cut Copy. Okay, they might not be veterans—I mean, they’ve only been a band since 2001—but they’re definitely professionals. The quality of their tracks, their level of performance, the way they braced the crowd—you can tell they’ve been in the game for a while, and it’s clear why fans are continuously drawn back for sold-out NYC shows.

Performing favorites like “Hearts On Fire” and “Lights & Music,” Cut Copy satisfied every need and desire the crowd might have had. They put on such a killer show, in fact, that they even managed to break through the pretention and snobbiness that often holds New Yorkers back. They succeeded in getting everyone—and I mean everyone—either dancing, tapping their feet or bobbing their heads. There wasn’t a still body in the room, and for a capacity crowd at Terminal 5, that’s a darn impressive amount of people. The Aussie lads even proved—despite all evidence to the contrary—that harmonies and full-venue clap-alongs really can work in dance tracks. They had the perfect amount of crowd interaction, with short introductions, small talk between tracks, and crowd-rousers like “Let’s do this.” This was enough to make fans feel like they got a little closer to the band members, while ensuring that the focus of their show was very much on their music. Very well-played boys. A year ago, electro and dance music wouldn’t have featured anywhere near the top of my list. While it’s not a genre I will ever commit to full-time, it’s certainly a style of music I now can’t live without. And all credit is due to bands like Cut Copy and Matt & Kim. Just when everything else starts to feel a little stale, they bring the right amount of funk and style back into the picture.