NEW YORK, NY—Having only arrived at the Bowery Ballroom for the last song of the Dub Trio’s set, the few minutes reminded me of the Sleepytime’s previous appearance at Bowery in support of In Glorious Times. That show featured the Secret Chiefs 3, and it seemed more than mere coincidence that instrumental acts opened for SGM their last two tours through the city. 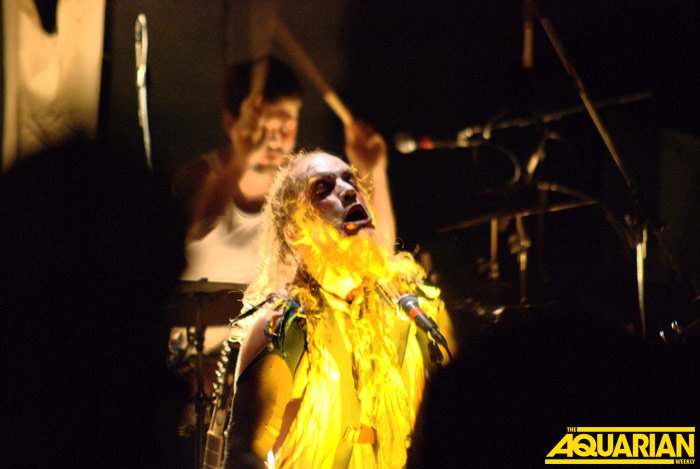 Or maybe it is mere coincidence. It’s hard to tell with Sleepytime Gorilla Museum.

But after assembling their abnormal stage setup, including large custom-built instruments (the percussion guitar and slide piano log) that resemble lap steel guitars but sound more like classical strings as well as Michael Mellender’s large array of tin-can percussion and various sound-making devices, the quintet took to the stage with a playful dub song, in deference to their openers, eventually merging it with “1997 (Tonight We’re Gonna Party Like It’s).”

From then on, it was business as unusual for Sleepytime, who, now a bit off the album cycle, played a disparate selection of material from their back catalog, though still including staples “Ambugaton,” “The Donkey-Headed Adversary Of Humanity Opens The Discussion,” and recent favorite “Angle Of Repose,” though they curiously avoided the recent single “Helpless Corpses Enactment.” The show was also something of a family affair: Violinist Carla Kihlstedt was with child and bassist Dan Rathbun’s toddler made an appearance on stage with his mother at one point.

There were some issues with sound, particularly an extended problem with Kihlstedt’s amplification. Drummer Matthias Bossi saved the day with an impromptu oration about “The Last Human Being” (also the title of an upcoming short film curated by the group), entertaining the entire venue by spinning a drawing around, which says something about both Bossi’s charm and the audience’s taste.

Lead singer/guitarist Nils Frykdahl was front and center, wiggling around like some demented satyr and enthralled the audience with the friendly smile of a violent clown. If anything, the performance, unlike their last Bowery play and Highline Ballroom show before that, lacked a bit of the high drama the band I’d come to expect out of the band of late. Perhaps exhausted by an extended amount of touring, filming, etc., they weren’t bored or playing poorly, but perhaps slightly uninspired for this time around (aside from some bizarre short soliloquies from Frykdahl). Most of the memorable moments, particularly the oration from Bossi, seemed happy accidents rather than grand plans, though it’s always hard to tell if SGM aren’t crafting some elaborate ruse. Either way, it would be difficult to categorize the show as a disappointment, particularly as it seems—by way of attendance, anyway—their fan base has grown in the wake of their rigorous touring.

As they opened with a dub version of “1997,” it was even money they’d come out for an encore and close with “Sleep Is Wrong,” as they did to great fanfare.