HOLMDEL, NJ—Eighteen years ago Nine Inch Nails took the stage at the first Lollapalooza concert. The man that was the band, Trent Reznor, was riding the wave that Pretty Hate Machine generated, a mix of synth guitar and angst that exploded on the scene. Jane’s Addiction ended that night in 1991 as rain began, to the strains of “Up The Beach” from Nothing’s Shocking, another album that shook the rock world with its weight, its rawness, and a cover that got banned in seven of 10 major record chains. Nine Inch Nails and Jane’s addiction were the vanguard of what the 1990s would be: A bit harder, a little darker, music veered toward the sinister. At least there were still record store chains.

Cut to 2009. NIN and JA together again? This was the show to see at PNC. Trent was calling this the Wave Goodbye tour after announcing on his website that the thing called Nine Inch Nails is done touring for the foreseeable future. Weird, given Trent has been on a creative bender. Where it used to take five years to get new NIN, with With Teeth, Year Zero, and the awesome Ghosts and 2008’s The Slip, this would not seem like the time to stop. The good news is that rock retirements are taken even less seriously as boxing. 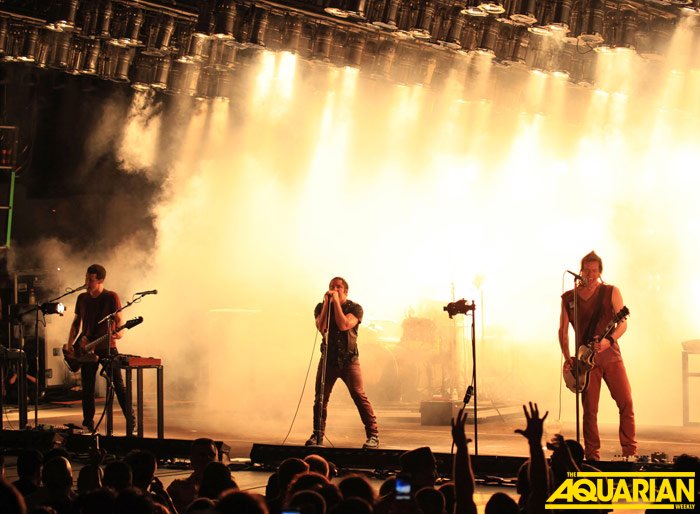 The audience at PNC could tell this wasn’t going to be a small production, fog machines came to life and hissed until the stage was obliterated. Hundreds of lights above, a literal wall of lights behind for Trent and the band’s visual and sonic assault. Opening with “Pinion/Wish/Last” from Broken, Trent didn’t play it safe, often going into uncharted territory. The crowd reacted like it was all, well, a really fucking great Nine Inch Nails show. Trent was dead-on with his voice and attitude. The show ended with a sledgehammer trio of “The Hand That Feeds,” “Head Like A Hole,” and quite possibly the most awesomely depressing song Trent ever penned, “Hurt.”

Jane’s Addiction didn’t disappoint. Not better and not worse, this is an entirely different band then NIN. Jane’s Addiction was always dark like NIN, but had a lighter, different sense of self. Jane’s was organic rock and roll, in sharp contrast with NIN’s nail-gun rhythms. Perry Ferrell is as unique in his world as Trent is in his, to our enormous benefit. Comparisons on which band was “better” are moot given they are two very different beasts.

A stripped down stage show compared to other JA tours, No dancers trailing Perry around stage this time, a good thing. Great to see the original line-up intact and present. Drummer Stephen Perkins and Bassist Eric Avery were their own machine of a rhythm section, leaving Dave Navarro to spray his guitar on top. Shirtless in blue jeans, dozens of tats, he was the perfect cliché of himself as Rock Guitar God, and it worked, down to the cigarette in the headstock. Perry is still fucking insane, clearly having a good time, remarking how great the crowd was and how he loved the intimacy of the venue. There is very little space between the first rows and the stage at PNC, and Perry grabbed every hand that reached out to him. A greatest hits compilation of a set reminded everyone how great this band was, and can still be. For those at PNC on this gorgeous June evening, it was fun to party like it was 1991.