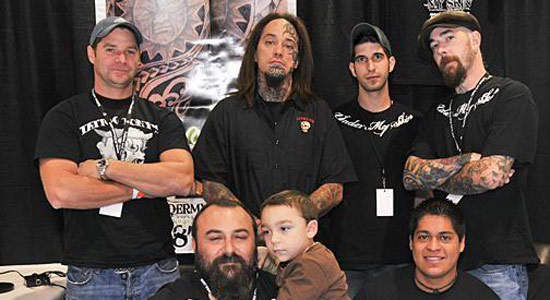 Back in September, my band, Mean Venus was asked to play a benefit show to remember the late Anthony DiGrigorio over at Tiki Stadium in Keansburg, NJ. This is where I met Tattoo Tony, who was one of the organizers of the very successful event. Who is Tattoo Tony you might be asking yourself? Well, if you’re a reality TV junkie like myself, and you’ve watched a season or two of VH-1’s Rock Of Love With Bret Michaels, you would know that Tattoo Tony is Bret Michaels’ personal tattoo artist and one of his best friends. One of Tony’s most memorable moments on the show was when he tattooed the name “Bret” on the back of one of girl’s necks. Anyway, I mentioned to Tattoo Tony that I was in the market for a new tattoo and that I also happened to write a tattoo column for The Aquarian, and he quickly gave me his card and said, “Give me a call, bro!” So, I did exactly what he asked and took a ride over to Tattoo Tony’s Under My Skin Tattoo in Atlantic Highlands, NJ.

I have to say that on the way over to the shop, I ended up missing my turn because I was distracted by all of the Beverly Hills style mansions along the water. What was I in for? What kind of neighborhood was Tony’s shop in? Was I underdressed? I finally made it to the shop after getting lost and was greeted by Tattoo Tony who was sitting behind his desk fighting a cold. I was not underdressed. In fact, I was dressed just right. The shop was a nice little clean spot with red walls adorned with a wall of autographed celebrity photos that Tattoo Tony had collected through the years. Of course, there was a wall of “flash art” portfolios also underneath the wall of fame. 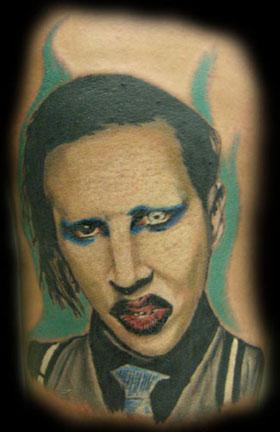 After sitting down with the Tattoo Tony, I learned that he’s been tattooing since 1984. The late Gene Bernardo, whom Tony holds in high regard, taught him everything that he knew about tattooing down at his shop Gene’s Body Art World in Asbury Park, NJ. Though he’s a Neptune, NJ, native, in 1994, Tattoo Tony felt that it was time for him to branch out and he opened up shops in Tennessee, Florida, and North Carolina before returning home to Asbury Park, NJ, to open Dark City Tattoo, where he worked for about three years. Tony opened Under My Skin two years ago in Atlantic Highlands, NJ, which is right next door to Sandy Hook. Tony says that a lot has happened within those two years with himself, his guys, and all of the TV shows featuring the shop, and says that the TV shows have definitely helped his business.

Joining Tattoo Tony at Under My Skin is another Gene Bernardo disciple named T-Bone. There’s also 18-year tattoo veteran Jersey Jay Wymbs and newcomer Oscar Arias, who’s only been tattooing for two years, but claims to have learned a lot from Tony, T-Bone, and Jersey Jay. Tony tells me that he has a lot of faith in his guys to put 150 percent into every tattoo and even says that “my artists can tattoo anything that anyone can ever want.” They all have their own styles and specialties, but they will, however, spend the time to consult every customer to assure that they have a great tattoo experience.

Under My Skin is mainly a custom tattoo shop. Tony says that when customers come into the shop now, they know what they want and come in with pictures that they downloaded off of the Internet. Tony also feels that shows like L.A. Ink and Miami Ink have opened people’s eyes to tattooing, and now all walks of life are walking into the shop from truck drivers to CEOs. As far as age goes, Tony told me that the state law says that between the ages of 16 to 18, you have to have parent’s consent, but on the average the shop doesn’t get too many underage requests.

When I asked Tattoo Tony about prices as compared to other shops, he said that his shop is very fair. If they’re doing a piece by the hour, it’s usually $100 an hour, but if he is doing a piece by the hour, he feels that he ends up cutting his own throat. For instance, this winter season Under My Skin is running a special called $300 Thursdays, and Tony says in three hours, he can pretty much sleeve somebody, but they would be paying more than $300 if he did have to sleeve them. So, I guess he really does lose money on Thursdays! Tony says that the economy has hurt business a little, but they are still very busy.

Tattoo Tony tells me that walk-ins are always welcome at Under My Skin, and whoever doesn’t have an appointment will pick up the walk-in. For the most part, appointments are preferred especially if you want to get tattooed by Tony. You can call the shop to make an appointment at (732) 872-4092 or stop in and take your chance as a walk-in at 73 Memorial Parkway in Atlantic Highlands, NJ. If you want to see some of the work done by Tattoo Tony, T-Bone, Jersey Jay or Oscar Arias before you take a ride to Atlantic Highlands, log onto undermyskintat2.com. Trust me, when I tell you that the stories that Tattoo Tony shared with me as far as his celebrity clientele goes, like Bret Michaels, The Wild Samoans, and E.C.W.’s Balls Mahoney, I can actually write a whole other feature on him. I can actually write a whole other feature about his relationship with Bret Michaels, but for now, I had to choose to focus on Tony’s shop Under My Skin. 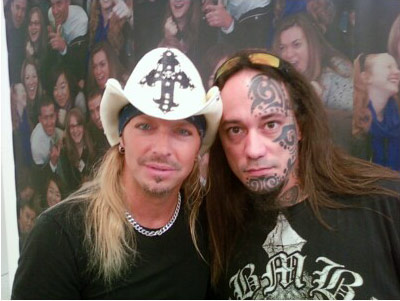 I’ve been tattooing for 25 years.

Some girl came in and asked for flames around her a**hole. I don’t think that she ever came back and actually got it though.

Since this is a music newspaper, what kind of music do you listen to? What are some of your favorite bands?

I love all kinds of metal, hardcore, ‘80s rock, classic rock, and I even listen to the blues!

In five years, I hope that my son is following in his daddy’s footsteps, but will always be here at Under My Skin with all my guys T-Bone, Jersey Jay, and Oscar!