I was recently contacted via email to visit a shop down in Linden, NJ. Now, to local musicians like me, Linden, NJ, is known as the home of The Cup Entertainment Complex because we’ve all played there at one time or another. Well, this would be the first time that I headed to Linden without playing at The Cup. This time I was going to visit Paul Nolin’s tattoo shop, Physical Graffiti Tattoo.

Physical Graffiti, which has been in the same spot since 1993, is in a great location. It’s right in the middle of one of the busiest streets in Linden, Saint Georges Avenue, and besides, it’s hard to miss the big bright sign in the front that glows “Tattoos.” After finding parking, I entered what might’ve been one of the biggest tattoo shops that I’ve ever visited. Physical Graffiti has two entrances: you can walk through one door where you’ll end up on the body piercing side of the shop, and you’ll be greeted by resident body piercer Tommy Hill, or you can walk through the other door, which will bring you to the tattoo side of the shop. The tattoo side had a small reception desk in the front and behind it was wall-to-wall art in frames and those wall books filled with flash art. In fact, Physical Graffiti boasted having the largest selection of flash tattoo designs and body jewelry in the area.

When I walked in to meet owner Paul Nolin, he was already consulting a customer, who was apparently asking Paul to cover up a tattoo that he no longer wanted. It was pretty interesting to hear Paul give his professional and honest opinion as to what this customer should do as far as covering the tattoo cover up. When he was finished consulting the customer, we got to sit down and talk a little about this gigantic tattoo shop, or should I even say tattoo complex? 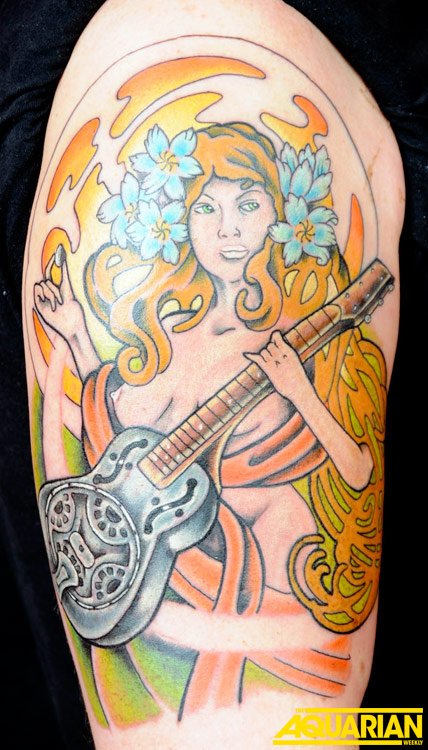 Anyway, when I asked Paul how many artists were in the shop, he told me that with the exception of guest artists like his friends, world-renowned Japanese tattoo artist Horiryu and Bobby Trefz from Philly (who apprenticed under Paul), he was the only artist in the shop for now. Paul, who’s been in the business since 1989, did mention that he is in the market for some new staff artists, so if you’re a great tattoo artist looking for work, stop down at Physical Graffiti with your portfolio or email Paul through the website, physicalgraffiti.net.

He also told me what separates him from other shops is that his specialty is bright colors, and that he’s focused over the years on bold line work, but bright color is his forte. He says that he can do black and grey work, he can do portraits, but colors is his thing. He stated that he enjoyed bright colors thoroughly and the result that he’s achieved is second to none in this area. Paul told me that he grew up in the Linden area, so a lot of his childhood friends are his clients, but the rest of his clientele discovered the shop through the phone book, word of mouth, and most of all, the Internet, which led me to my next question.

I asked Paul if he felt that the Internet has changed the tattoo industry at all and he told me that he felt the Internet has changed the industry drastically, but it’s not only the Internet, it’s also TV. He says that these mediums have made tattooing more mainstream and more socially acceptable, which in a way kind of killed the industry’s mystique. He remembered when he came onto the scene 21 years ago that he was actually afraid to walk into a tattoo shop. Paul said, “Back then, you didn’t talk out of line and you certainly wouldn’t try to snap pictures off the wall. They’d beat the shit out of you, throw you out, and you’d be lucky if you had your wallet when your ass hit the street.” In that sense, Paul feels that the media has really softened up the image of the tattoo business, but in a positive perspective. The media brought the business a wider audience, where businessmen, dentists, doctors, and even lawyers are getting tattooed now because it’s socially acceptable, but at the same time, he also feels that it gives tattooing that “Disney-esque” feel.

As far as Internet, I asked Paul if it was easier with technology for people to come in with their own artwork, and he actually said that he had a problem with that, but what really irks him is when customers come in with their cell phone pictures asking, “Can you do this?” or “How much to do that?” Paul says that you can’t judge size or see detail from a cell phone picture, so it’s tough to even give customers an estimate. He also said that, as of late, customers have been requesting copies of other people’s tattoos, which he has a real problem with because it takes away from the individuality of tattoos. In fact, he says that he probably won’t do it if it’s a copy of someone else’s tattoo, but he will, however do “his” version of a copy. Paul feels this way, he can put a little bit of originality back into tattooing.

Needless to say Physical Graffiti is a custom tattoo shop, but not restricted to doing flash work. Paul says that he will do cover up work as it’s needed, since we did discuss a little about the ongoing problem within the tattoo industry, and that’s what is known as “scratch artists.” For example, people who claim to be tattoo artists are buying machines, but they’re not licensed. They go to these parties and tattoo or they tattoo out of their own basement, and their work is just horrendous. These customers, who have this horrible artwork on their bodies, come to real artists like Paul and beg for him to cover up the garbage on their skin, which Paul says is an ongoing cancer in this industry, and that people need to beware of these “scratch artists,” not to mention these guys don’t use sterilization machines. Now that’s gross!

As far as price goes at Physical Graffiti, Paul says that he tries to give a flat rate as much as possible, but their prices are pretty comparable to other shops in the area. He’ll start at $50 and depending on the size of the piece, he will go from there. If it’s big work like sleeves or a full back, Paul says that he charges by the hour for those, and he gets $175 per hour for the big jobs, which might be on the higher end in his area. Since he is on a busy street, walk-ins are always welcome, but said that appointments always come first.

According to New Jersey state law, you must be 16-years-old to be tattooed in Physical Graffiti with a parent consent form, and as for piercing, they won’t pierce anyone under 13-years-old. And by the way, the body piercing at Physical Graffiti is just as important as it takes up a whole other half of the shop. Piercer Tommy Hill, who’s been piercing for 17 years, is the house body piercer. He’s been with Paul since 2002 and from what I understand, Tommy is the highest paid body piercer in the industry. Tommy’s work can be seen on physicalgraffiti.net.

One other really cool thing that I saw in the shop that I forgot to mention and that Paul pointed out to me was that next to each private tattoo room is a monitor that showcases each artists work right next to their rooms. Paul put those up when he did have artists in the shop, which he does plan on having again when he finds the right ones. I though the idea was brilliant and much better than just having their portfolios lying around. You need to see this place for yourself, though! Don’t just take my word for it. Physical Graffiti is located at 275 West Saint Georges Avenue in Linden, NJ. Stop in! Owner Paul Nolin is super-friendly! If you want to see their work, you can log onto physicalgraffiti.net or call the shop to make an appointment at (908) 925-5288. The shop also has an iPhone Application for you iPhone users. I think that was a great idea too! Growing with the times is what successful business is all about though, right? Just look at the music business!

One time I tattooed the name “Mini” on a guy’s dick! Another time, I tattooed “Blow Me” with a pair of lips smoking a cigarette. I’m not into dick tattoos! I just get stuck doing them.

Since this is a music paper, what kind of music do you listen to? What are some of your favorite bands?

I listen to it all! My iPod has Frank Sinatra, Dean Martin, Snoop Dog, Hatebreed, Barry White, Beastie Boys, The Beatles, etc.

Still here at Physical Graffiti! I love this job. If I didn’t, I wouldn’t be doing it all of these years!