BROOKLYN, NY—It was a night originally destined to be at the much larger Brooklyn Masonic Temple, but that was wishful thinking on the part of the promoters, perhaps, for Jello Biafra’s first New York show fronting his own band in many years. Possibly decades.

Sure, he’d been around with the Melvins. And he has toured his spoken word shows several times. But somewhere along the way, with the fake Dead Kennedys reunions (various fringe members of the band sans Biafra) and the surrounding punk drama taking some steam out of Jello’s sails, interest in the show wasn’t boiling over.

Not that it was Jello’s fault in the slightest. Actually, his performance with the Guantanamo School Of Medicine, featuring longtime punk players such as Andrew Weiss, was by any measure surprising. He was manically theatrical throughout the performance—restrained only by some wisdom and the knowledge that he’s 50-something—and he didn’t shy away from DK material, even though the focus was clearly on his first solo release, The Audacity Of Hype. 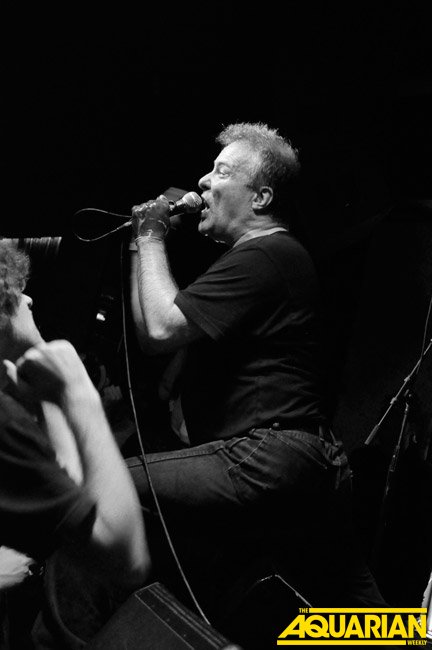 It’s possible the locale was at fault. The jaded Brooklyn crowd that’s at four shows a week had obviously deemed this Thursday night a take-it-or-leave-it event, though many from the press corps were in action. And the crowd reaction was plainly not to Jello’s satisfaction. Here’s a man writhing on stage with gestures for almost every line of his songs, ripping his clothing off—doctor’s uniforms and American flag shirts—like a theatrical punk star of yore, interspersing his already political songs with barbs on atrocities committed when the crowd was in diapers, and his audience is only half into it, just waiting for “California Uber Alles.”

They know that one, after all. It’s a good song. And it was a treat to hear the man sing it.

It wasn’t offensive, but the sense of benign curiosity should have been a whipped fervor. Maybe it was something in the drinks. Maybe it’s the fact there were drinks. Maybe after so many years as a figurehead, the crowd found Biafra as a music performer difficult to swallow.

Maybe he should have opened with “Holiday In Cambodia” or “Too Drunk To Fuck,” then went into the solo stuff.

Maybe it wasn’t a punk crowd, despite Alternative Tentacles labelmates Star Fucking Hipsters and Witch Hunt as openers. Many in the audience seemed to be there out of great respect for Biafra, but they weren’t the “punk youth,” if there is such a thing anymore. More like the punk 30-year-old.

To say the show was disappointing would be incorrect. It was enlightening. It was a lot of fun watching Biafra up there, it was great to hear some old songs and new ones as well, and it was heartening to see the man still has that dedication and drive. But despite Jello’s hatred of nostalgia—what was his main rationale for avoiding a Dead Kennedys reunion before they sued the pants off of him—this Thursday night in Brooklyn seemed to be a period piece. Yes, some of the players have changed. Reagan is now Bush or Obama, Iran-Contra is now Blackwater murder trials or attorney general firings, Klaus Flouride is now Andrew Weiss, but the tactics are the same, the sound is the same, the feel is the same. And political apathy leads to political music apathy.

It felt like 1983 was on stage and 2010 was in the audience. We in the crowd may all believe in the causes, but if it interferes with our comfortable lives, we’re not going to take to the streets. And the sad truth is it’s unlikely we ever will, unless the shit really hits the fan, and even then, will we recognize when it does?