NEW YORK, NY—I hadn’t felt quite this excited about a show in a long time. Now, I was about to witness what I fully expected to be the epitome of an Opeth show. They were to play three hours of music spanning their entire catalogue, including a performance of my personal favorite Opeth album, Blackwater Park, in its entirety. All that, in celebration of their 20th anniversary and this was to be one of just five, very special “Evening With…” shows. This sold out event at Terminal 5 was the second-to-last outing.

This tour also seems to have marked the introduction of a video projection screen draped behind the band. Throughout the night it showed creepy, Blair Witch Project-like, running-through-the-woods footage as well as animations of fire, lightning, water and the band’s logo. It was a bit simplistic, but a nice idea and hopefully something that they continue to use.

They began the festivities just minutes after 8 p.m. (I greatly appreciated the punctuality), when the band performed the previously mentioned 2001 opus, Blackwater Park, in its entirety for the first of the two-set affair. 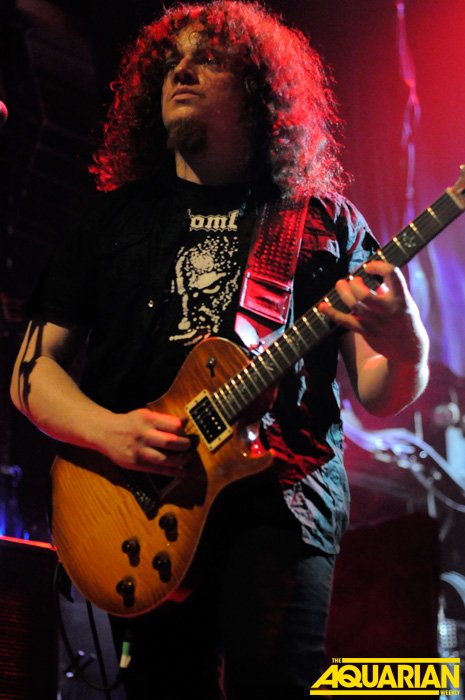 In an effort to give the audience the full album experience, singer Mikael Akerfeldt did not verbally address the crowd during Blackwater Park. Akerfeldt’s cheeky bullshitting between songs really is very important to the live experience of the band. Their music, compared to most bands of their ilk, is slow and does not encourage a great amount of stage theatrics. As a result, they are known for a pretty stationary live show. Fortunately, Opeth generally has a good sounding show, which keeps fans into the music, if not the performance of it.

For the second set, the band played one selection from each of their eight other studio albums: “Forest Of October” from Orchid, “Advent” from Morningrise, “April Ethereal” from My Arms, Your Hearse, “The Moor” from Still Life, “Wreath” from Deliverance, “Windowpane” from Damnation, “Reverie/Harlequin Forest” from Ghost Reveries and “Lotus Eater” from Watershed.

Without a doubt, the highlight of this second set, and the show in general was that Akerfeldt provided little autobiographical tidbits between each song. We found him recalling the various personnel changes between albums, good-naturedly taking shots at former members and their new careers, even sharing his experience with the meatball sub he ate prior to taking the stage that night (I can only imagine what the poor guy was going through). Curiously though, Akerfeldt never once called attention to the fact that he is the only original member of the band, bassist Martin Mendez holding the second longest tenure, having joined in 1997.

As the band thanked the crowd after their final song, they were overwhelmed with chants of “20 more” as the appreciative crowd, full of fanboys like me, tried to persuade them to do an encore. I can not say I was disappointed when they declined (you gotta draw the line somewhere, and three hours isn’t a bad place) but I’ll admit that I am looking forward to anniversary number 25 and onward.