If a picture is worth a thousand words, then the alien six-string virtuosity of Jeff Beck must be worth a hundred thousand different pictures of a musical journey through myriads of experiences. The legendary guitarist and 2010 Grammy winner is back in action with new management, a new label and a new record titled Emotion & Commotion, a platter that entered the Billboard Top 200 Albums chart at #11, the highest debut of his 45-year career and his highest chart position since 1975’s Blow By Blow held the number four spot.

Beck has often been dismissed as a difficult artist that burns through band members and business opportunities and prefers classic Ford hotrods to people. And while that could be true (he does love those cars) Beck’s new project and profile has once again dodged assumptions, surprising everyone who thought he might be quietly done with the business. His record is filled with unique and challenging material that is miles away from the original Yardbirds stuff that he cut his teeth on. Jeff Beck himself remains true to his art (he allegedly turned down Guitar Hero with a resounding “No fucking way.”). Having said that, he also seems to have mellowed, listening to management and friends when it comes to new directions. A self-professed control freak, tonight’s live performance at the Paramount Theater is Asbury Park, NJ, showed Beck amicably stepping out of the limelight more than once to let his band get some wood shedding props. 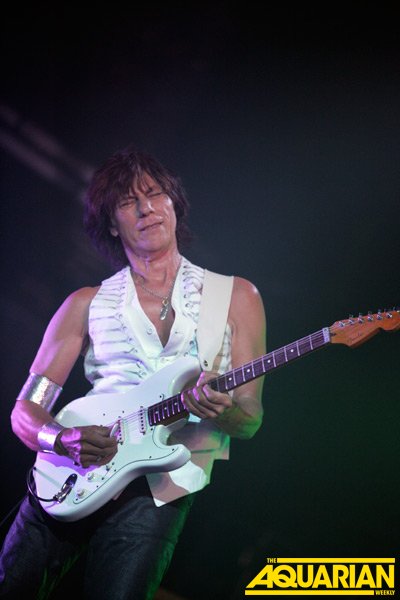 The Imelda May Band promptly hit at 8 p.m., warming the crowd with their Irish blitzkrieg of surf, blues and car crashing rockabilly boogie woogie that would be perfectly at home in any Quentin Tarentino flick. The drop dead gorgeous May bumps and curvaceously grinds, growls and croons with a passion that generally makes you want to do more with her than just buy her album. Her raucous trio slaps and pops their way through a punkabilly vibe reminiscent of Gene Vincent, Eddie Cochran wrapped in the sexy snarl of Eartha Kitt. But she has a smooth, blue velvet side as well and she graces Beck’s Emotion & Commotion, handling vocals on “Lilac Wine” (From Jeff Buckley’s album Grace) and “Poor Boy.”

By the time Jeff Beck hit the stage, the crowd was already wound up, leaving ushers to scramble out “sit down” commands (seating etiquette is strictly enforced) as the band kicked into “Eternity’s Breath.” Beck trades his earlier rock and roll stage stalking for concentrated positioning, letting his latest bass quasar Tal Wilkenfeld Rhonda Smith do the attention-grabbing thing. Young, gorgeous and dangerously talented, she’s accomplished more than most musicians get through in a lifetime, most famously as Prince’s bassist.

Utilizing three guitars all night—his olympic white Fender, Jeff Beck signature Stratocaster, and the old 1950s blackface Telecaster, the addition of a wah through a single Marshall JCM 2000 (50 watt version) and a few cabinets, and a Gibson Les Paul on “How High The Moon”—was all it took to let his finger-tipped tone and imagination takes us on a journey of the stormiest scales, bar warbles and outer limits riffage New Jersey has seen in quite a while.

I follow no set list numbering or chronological order here, but standouts were of course “Led Boots,” blowing straight out of the gate with that familiar melodic riff in four-four back beat courtesy of Narada Michael Walden, who is the original drummer from Blow By Blow Wired. The bridge section duel between Beck and keyboardist Jason Rebello was intense as well, matching synthed notes tandem to Beck’s Squelches and chimey explosive bursts.

His choice of Seán Ó Riada’s “Mná na h-Éireann” was an emotional piece and as I looked around at the many attentive faces, you could see the effect of his melody and skilled instrument reproduction, mimicking terracotta and bone whistles, Celtic harp and horn quite effortlessly with his glissando fueled Stratocaster. Some 20-year-old kid sitting behind me kept going, “Oh my god!” and of course, as annoying as that might be, you have to agree with the kid. Beck’s urgent melody forms underneath palmed bar pulls; bends and trills to the ninth power and you have to be a cool customer for it to not blow your mind.

The Impressions’ “People Get Ready” was another ovation tonight. Beck’s good-natured grin revealed his willingness to continue giving his “family” this expected classic. His use of volume swells and orbital space sounds have always intrigued me (and about a million other guitarists) rolling down violin-toned tenacity to pitch for the required choice of patterns. Part of the reason he gave up playing with a pick in the ‘80s was because the thumb and fingers give so much more control and sensitivity to the job at hand.

Muddy Waters’ “Rollin & Tumblin” put Beck down at the tenacious crossroads of Walden and Smith, who worked in tandem as Rhonda groaned down and dirty gospel vocal chops over her Fender bass. Beck is a raging anomaly at the mid-point, his guitar breaking up in a beautifully controllable rage.

“Hammerhead” lives up to its name as it dives into vicious progressive waters, biting off quantities of a thick, dark Hendrix-toned atmosphere before clearing the smoke and blowing into the epic pre-verse groove before heading down the rabbit hole and into the multi leveled bends of Beck’s sick addictive melody. Walden, Smith and Rebello bang down the beat heavy door for Beck’s mid-ranged and frenetic blues entrance throughout the bridge. I especially enjoyed the Arab-inspired “Kashmir” swagger in the ending piece.

1989’s “Big Block” roared off the stage via Smith and Walden, who once again put down thick and heavy red carpet rhythm for Beck to walk on by. Beck chokes up on the neck, squeezing throaty squeals and groans out of that Stratocaster like nobody else can. Maybe if Hendrix was still around he’d give him a run for the money but that’s about it.

And of course Jeff’s tender version of “Somewhere Over The Rainbow,” his personal ode to good friend Les Paul. The level of reverence that Les Paul will always hold for Jeff and everyone else in the music community was completely clear as we remembered the good-natured gentleman who changed all of our lives through his ideas. The beautiful soprano phrasing and harmonic chimed music box pedal steel pulls that Jeff came out with just tugged at every heartstring in the house.

Jeff has done The Beatles, “A Day In The Life” for a few years now and it never gets stale as demonstrated tonight with Jeff pulling sweet mellow toned wails out of his Strat intro. The band kicks into their half-time groove, lying low underneath Beck’s lines, supporting his melodic voiced structures and staying clear of harmonic laced dive bombs. The band jumps in now full force on the second verse, leaving Beck to soar dynamic heights, eyes closed in the act of bending the bar down, up and in-between, recreating the eerie vocal toned warble of Lennon singing “I’d love to turn you on.”

The 24-bar middle section spun down into the wild place that only Beck could go as we all just watched in awe. The band just hung on, roller coaster tight, pulling up and out of its plunge and dive as the orchestral-toned cacophony moves back into familiar territory. Beck reverses into the McCartney verse melody with a quick over the shoulder look before backing into the last bridges and verse, and once again into that swirling end atmosphere that the band barely clears on its way to that last crashing chord.

Watching Beck I can definitely see where guys like Eddie Van Halen and Eric Johnson culled their style, while at the same time seeing the tonal inflections and influences of Les Paul, Cliff Gallup and Django Reinhardt’s obvious effect that fires Beck’s emotive foundation. Passionate and soulful, he never overshot or relied on shredding gimmicks. It was just pure tone to the bone and the mixed crowd (there were grandpas and teenagers) picked up on every note he sent out.

Jeff Beck is back and better than ever. The capacity crowd knew it, and more importantly, you could see it in his eyes and in the never-ending grin of a musician that has been to the edge and just wants to play guitar. Emotion & Commotion is a celebratory creation that moves to its own orchestrated beat and anyone who has heard it will attest to that statement. It’s great to see that Jeff Beck has finally come to terms with the happy business of being Jeff Beck.