ASBURY PARK, NJ—Southside Johnny and the Asbury Jukes’ summer visit to the Stone Pony has been a regular on concert calendars forever. This 4th of July weekend was no exception. The pilgrimages to Asbury for that other guy? Well, He gets enough ink, and no, He didn’t show up. So, on to what matters…

The Stone Pony’s Summer Stage setup is the best they’ve had. Remember the tent shows? A new stage is in its second year of use. The Pony gets packed to the gills, but there was still room to maneuver around the crowd to grab beer and food and merch.

No weather worries, it was gorgeous. Johnny went on right at sunset, and with the stage facing east, the band was lit from the front by concert lights, and from behind by the sunset. Asbury is the farthest thing from Red Rocks anyone could imagine, but as Venus appeared above the stage as the sky turned orange and faded to black, there was an organic, part-of-this-planet concert vibe I would never have imagined getting while standing on Asbury Park asphalt. 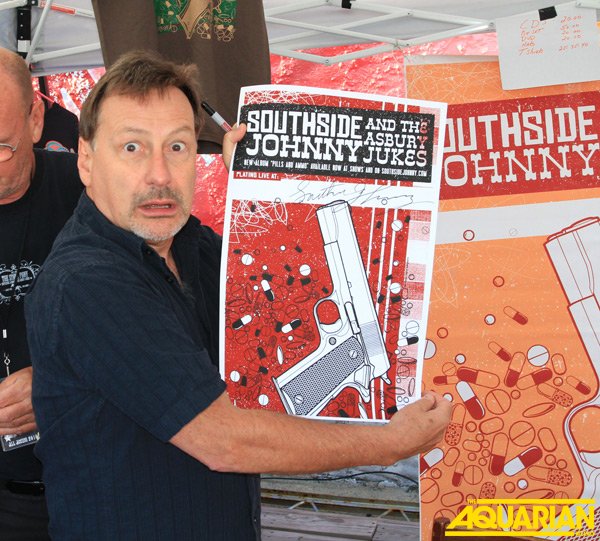 Steve Forbert slayed for a solo acoustic act playing for a crowd raring to see a big band. A delayed reaction could be heard as people remembered “Romeo’s Tune”; the “Oh yeah! I remember this! He’s the guy who does this? Nice!” round of applause. And he still looks like he‘s a kid. Wonderful set.

Jeff Cafone of the next-next big thing, Outside The Box, did a short solo acoustic set, and the band played a full band set inside after Southside’s show. Well-received before and after.

Sporting a black and white striped football [that’s soccer to us Yanks] jersey, Johnny looked and sounded great. The band has a new album of new material, Pills And Ammo. Early arrivals to the Summer Stage got a surprise as Johnny came out to sign merch and take photos with some of the fans. Very cool.

The band blew through 25-plus songs, those listening to a live Sirius/XM broadcast missed the antics of the Windmill Hotdog Mascot and the band flinging signed beachballs into the crowd.

Mercifully absent were the cries of “Bruuuuce” that tourists and wannabes shout out to signify they aren’t local, but are clueless.

The boardwalk aka “The lawn seats of Asbury Park” was packed with people who came down with beach chairs not wanting to pay or fight crowds, but just to be a part of it, to be there, in Asbury Park, on the 4th of July weekend, to hear the music of Asbury Park by the artist who defines the summer sound of Asbury Park as much as any other. Even that other guy.