On Thursday, May 17, the Morrison Hotel Gallery in SoHo debuted its latest photography exhibit CBGB & OMFUG — The Age Of Punk, which runs through June 17 and features portraits and live shots of the famed punk venue and its musical pioneers performing there and elsewhere. It’s an era in rock music that will likely never be experienced again, so if you get a chance check this show out. It’s a great history lesson for both longtime fans and younger ones not as familiar with the bands, and there are prints for sale.

Some of the shows’ photographers — Mick Rock, Lynn Goldsmith, Bob Gruen, Allen Tannenbaum, David Godlis, Ebet Roberts, and Blondie guitarist Chris Stein, along with punk fashion icon Jimmy Webb — were in attendance to launch the event. Stein and Blondie singer Deborah Harry arrived together and, quite naturally, had the room buzzing from the moment they walked in. The duo even held court with some fans down the street after they departed the packed room. Many of the artists photographed back in the day include Blondie, Joan Jett, the Sex Pistols, the Ramones, the Damned, and Patti Smith. The Morrison Hotel Gallery has featured many great exhibits over its 17 years in NYC, some recent highlights including Bruce Springsteen, the Rolling Stones, the Beatles, and HIM. 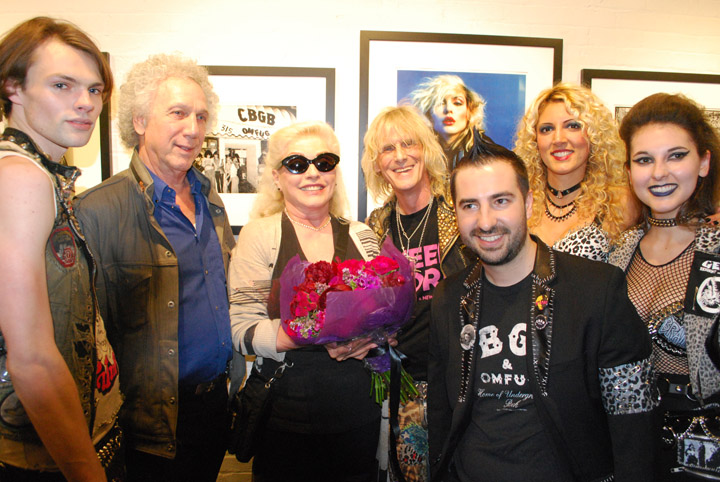 CBGB’s got a reboot at the Morrison Hotel Gallery in Soho as photographers, music fans, and Blondie’s Debby Harry and Chris Stein, whose photos also adorned the walls, joined forces for a night of celebration to the times and local punk fashionista Jimmy Webb’s (formerly of Trash and Vaudeville) lineup of clothes from his new store, I Need More.

The photographers were in attendance as well, taking on questions from the curious in addition to Daily News writer Jim Farber, The Aquarian’s own Charley Crespo, John Lennon assistant Fred Seaman, rocker Jana Peri, and yours truly. There was even a pic by Roberts of the infamous porcelain throne at CBGB’s with Joey Ramone tugging at a roll of toilet paper that bought back more than a few memories of the legendary club. As the boys from Queens so eloquently put it all those years ago, “Hey Ho Let’s Go!” and check it out at the Morrison Gallery in SoHo at 116 Prince Street.

The Avett Brothers at the Kings Theatre / November 5, 2022