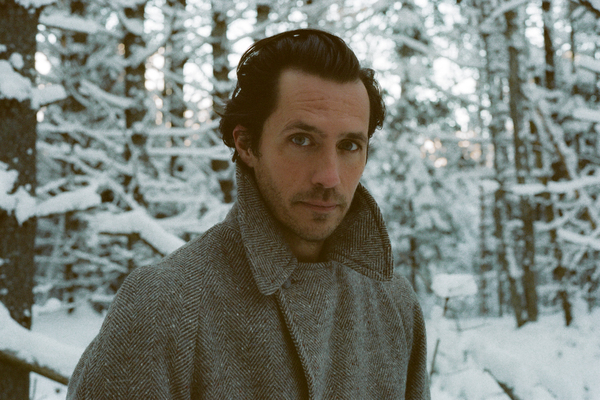 He claims to not be the most patient man, but Jesse Marchant has surely taught his fans how to wait for the perfect record to be released. Antelope Running is said perfect record… and it’s out today.

Jesse Marchant is an inspired musician who is intentional with his craft. Time and time again he outdoes himself with new music, updated sound, and ethereal, visually dynamic, motivational lyrics. This era of Marchant’s career takes that up far too many notches to count – yet fans new and old are far from phased. The performer’s audience has loved all he has released since the beginning of his career back in 2010, but still witnessed the growth that comes with age, time, and practice. The wait for such a top tier piece of music was worth it, because along the way Jesse Marchant dropped nearly perfect, stellar records to keep anyone and everyone entranced by his singer-songwriter talents.

Antelope Running is such an inspired record with a vocal performance that we believe is your most powerful to date. At the same time, these hefty, robust vocals are able to shine due to a sense of simplicity within the instrumentation and production aspect pf the record. When going into this piece of art, what were you hoping to create sonically? How did you end up with these professional, but unpretentious soundscapes?

Thank you. As I completed more and more of the songs I realized that many were lyrically quite dense, so I embraced the narrative nature of those by having the vocals and the story be the focal point of the production. Creating sparse arrangements around songs like that can actually be a challenge, since every little addition is blatantly noticeable and can easily dilute or alter the effect, so it has to be the right element, performed in the right way.

My collaborators – Logan Coale, Jason Lawrence, Stuart Bogie and Daniel Goodwin – were very good at contributing parts to the arrangements that felt innate, thereby elevating the narrative and widening the soundscape. Daniel (my co-producer and engineer) and I also spent a lot of time scrutinizing and shaping the arrangements after the initial tracking was complete, tweaking, adding and subtracting parts with keen intention. The vastness of the sound was something that we discussed in the process. Where and when to use reverb or other effects and when to keep things dry and tight – juxtaposing those simple elements. Dan is a phenomenal engineer and musician so we can usually get to what we are chasing after, between the two of us.

Lyrically, Antelope Running tells your most cohesive and thematic story to date. What do you hope your fans, new and old, take away from the narratives you delve into with these intricately crafted songs?

I would hope that the songs unravel to the listener over time, that they find a way to bloom in their imagination and offer varying images and thoughts to bask in over repeated listens. Since some of the songs meander, I would hope that the listener can revel in the instrumentation and find comfort or a sense of peace in those moments. I enjoyed that feeling when listening to the record early on. The album, to me, played well while walking or driving, so I would recommend trying that. Also, it sounds good loud.

Obviously doing anything creative during a global pandemic is questionable and undoubtably difficult in some way or another. Were there any obstacles you came across in the writing and recording process of this fifth installment of your career? How did you combat that to still turn around something so marvelous?

Yes, writing was indeed challenging, mostly because I was forced to stay in one place. It is in my nature to be on the move, and I often find missing pieces of the puzzle when I change my location, since that usually alters my state of mind. My wife and I were lucky enough to be in a beautiful wilderness during that time however, so I was not limited entirely. I would get out on the lake to clear my head, on a boat in the warmer months, then on foot or on skis when it froze.

What are you most excited about with this project of yours? Is it aesthetically pleasing visual component, a specific song, something else?

I am proud of how this albums plays as a whole. Despite the songs being relatively independent from one another, I feel that they play well together in sequence. My brother told me that it is one of those albums that is as pleasantly enjoyed in the background as it is on a focused listen. I like that. Musically, there are elements that I am proud of. The chord progressions and some of the melodies I like a lot. The pace and overall universe of the title track, specifically. I was skeptical of that song when I first wrote it, but imagined that it could work if we produced it just right. I feel that we got there with it in the end.

Being thoughtful and mindful of the music you are putting out in the world and releasing under your name is something you clearly take into consideration time and time again. How do you decide which songs and videos and all of the branding to your musical career get the greenlight to be released as compared to maybe projects that get pushed to the backburner?

That process is simple to me. I collaborate with people whose intentions/hearts are in the right place, and I go with my gut about what feels honest and meaningful to me and what doesn’t. Songs or video ideas that do not resonate are easily left by the wayside since they don’t live on with any passion in my thoughts over time. Generating the actual ideas maybe the most difficult part, since it requires a lot of patience – which maybe not my strongest virtue.

We beyond adore your single, and the music video, for “The Stream Rushes On.” Can you share a bit about how that song and video came to be? Because it is so effortlessly cinematic with a wonderful callback to an earlier song of yours.

Thank you. I wrote the song at a house I rented in the Catskills, where I went to work through some material I had been accumulating. It began as a slow guitar ballad, but as I got further along with it I felt it would be more interesting on the synthesizer with a programmed, uneventful beat.
The video was sent to me by my friend Brady Corbet, the film director. He surprised me with it. He and I had discussed making another video together, but we did not discuss the idea in particular. I did not know he was making it – he took a chance with it, going on the intuition that if he completed it in his vision, I would be responsive. He was right. There was some precedent, since we aligned closely on our first collaboration for the video of “Sister, I.” We travelled down to Kentucky together with the cinematographer Zachary Galler for that one to film a Skywriter we had hired for the occasion. It was an expansive experience and I deeply love how that one turned out. This video was delivered to me as a surprise companion to the first piece.

I caught wind that you became a father in the midst of crafting Antelope Running and these chaotic times. The biggest, most loving congratulations to you and your growing family! Did your perspective on life, your music, or even this album specifically change at all upon this milestone moment?

Thank you very much. I’m certain that my perspectives must indeed be changing, but I have not yet had the time to reflect on how. It is very difficult to sustain the career that I have, so I feel a greater sense of pressure in keeping both it and my personal life afloat. For the moment I can say that there is both relief and angst in placing more of my energy outside of myself, and that it is indeed true that there are different types of love that we may not be aware of until we experience them for ourselves.

ANTELOPE RUNNING IS OUT NOW ON ALL STREAMING PLATFORMS!