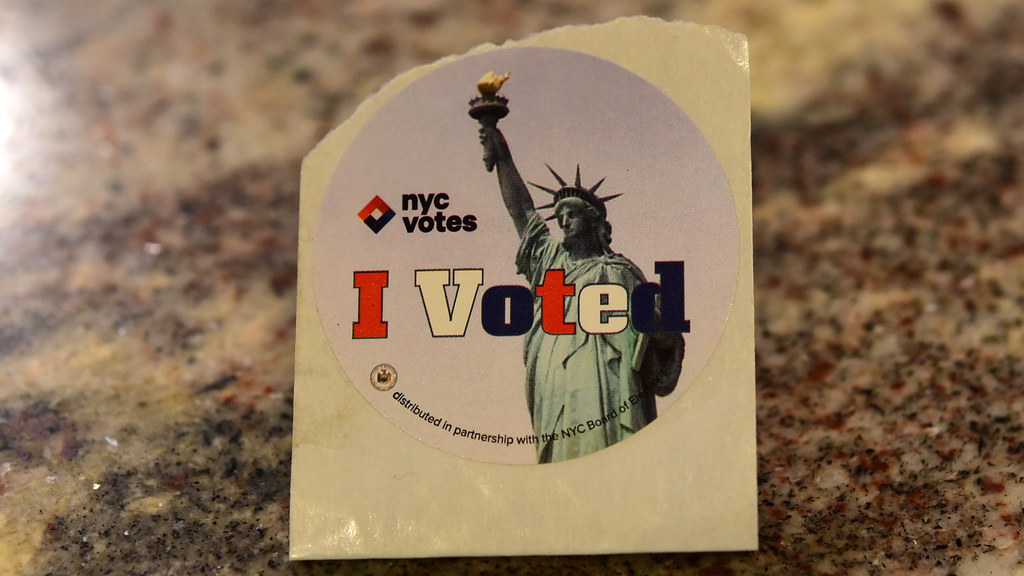 "NYC Votes Sticker" by slgckgc is licensed with CC BY 2.0.

Reality Check: ERIC ADAMS NEEDS TO BE THE NEXT MAYOR OF NEW YORK CITY

I need to state first, for the record, that if I haven’t already over the nearly quarter century, I have written this column, that I love New York City more than almost anything. Honestly. My family, sure. Music, absolutely. The Yankees, but they’re New York. The Bronx, really. That’s where I’m from. Born and raised. Well, actually, I was born in what was then called Columbia Presbyterian Hospital on the northeast end of Manhattan. My dad worked there at the time. Kind of a perk. But I grew up on Van Ness Avenue and White Plains Road, a short stroll from the Bronx Zoo. I did all the Bronx things – stickball, punch ball, fistfights in Catholic schoolyards at six, survived many of my friends being run down by speeding cars at eight, and throughout my boyhood, ducked the barrage of ammo that came raining down on us every Fourth of July.

Going to Manhattan in those years was always magical. Even when we moved to New Jersey in the early seventies and my dad was working in this incredible skyscraper across from the Plaza Hotel on West 57th, it was as if visiting Oz. All the best music, the best films, plays, and books came out of, or were centered on, NYC. Spiderman plied his trade there. Come on. This is why I dedicated my only novel to NYC. In my twenties and early thirties, I only ever dated NYC women – Brooklyn girls, to be exact. I had to. They got me and I got them. My current wife, from a small town up outside Syracuse, strangely possesses a cosmopolitan streak a mile wide. We practically live on the island. She once walked a dozen city blocks in her bare feet. We were comfortable at three in the afternoon and three in the morning there. It has everything a Vegan/Pagan/Feminist/Progressive/Artist could want – food, yoga, bars, and weirdos. Lots of blessed weirdos. Whenever we have been to other cities of repute (London, Paris, Barcelona, Los Angeles, Boston, San Francisco), she always remarks to me, “So… this is it? It’s not New York.”

So, I know when the city is in crisis. I can remember having my car stolen, and my girlfriend’s car broken into, and during that time when I drove medical records across all five boroughs in the early nineties, how much of a lawless wild west town it was. I could do anything – and I did. I drove along the street on the side of the Jacob Javits Center in reverse for four blocks, cut down one-way streets the opposite way to avoid traffic, drove on sidewalks, sped on service roads, and escaped a four-car pile-up I was in (but did not start, I promise), and double or triple parked like some petty outlaw. I saw drugs sold everywhere at any time and feral homeless attacking my car when I pulled off the Willis Avenue Bridge from Westchester, where I was living at the time. It wasn’t the romantic 1970s kind of hellhole, the Taxi Driver times, but it was bad. Race riots, carjacking, random shootings of all kinds by all ages across all races, neighborhoods, and economic strata.

The city is not there yet, but I see the signs.

I covered the Rudolf Giuliani election in the early nineties for the North County News out of Yorktown, NY. I was there that night when a Republican won and summarily announced he would clean up New York. We all laughed, but you know something? He did. A few things saved New York City in the 1990s – mostly Disney and MTV turning Times Square from a cesspool into a mecca, the Derek Jeter Yankees, along with the Rangers and Knicks being great, and the man I affectionately called Uncle Rudy. Giuliani did crack down on all the things we assumed could not be contained. His run was at times draconian and silly, and he could be quite the fucking asshole, but New York needed him.

This is the same man that has recently had his law license suspended for perpetuating Donald Trump’s hissy-fit election lie bullshit that led to the January 6 insurrections. Watching him blathering on like one of those lunatics on the subway, Giuliani has become America’s dupe and general embarrassment, and worse still, a threat to the nation’s democracy. He has fallen hard and should rightfully be locked up. Maybe he is mentally ill? It may have been contracting the prostate cancer that prevented him from going up against Hillary Clinton for that senate seat in 2001 (Another race I covered in this space). Giuliani, like many New Yorkers could see a Robert Kennedy type carpetbagger thing going on. The hatred for the Clintons was strong in him. Giuliani is also a bleating media whore, precisely why he keeps constant vigil around Trump, another legs-akimbo hustler of a different ilk. This combination drove him to complete madness in 2016 when Clinton tried to be president and Trump was the only one who could stop her. That obsession will likely land him in prison.

All of this NYC reminiscing brings me to Eric Adams, the current Brooklyn borough president who is atop the leader board for Democratic nominee to run for mayor this fall, which means, the next mayor. Crime rate and shootings are up – not at eighties levels, but they are on the rise, and speaking to people from Manhattan, Brooklyn, and the Bronx these past few weeks, it is getting clear that public safety is key to keeping the city on its current trajectory back from the quarantine. I spent my 22nd anniversary, as we mostly do, in Greenwich Village a couple of weeks ago, and the town is teaming. It is making it back and it does not need to get into culture wars, union falderal, or progressive chatter. It needs stabilization. It needs time to breathe and welcome in more tourists and bridge-and-tunnel types like myself and my daughter, who grew up on the streets of NYC with her dad wheeling her around to the sights and sounds of the grand metropolis.

New York is plenty progressive – even Staten Island. Ask the people of central Brooklyn, southeastern Queens, and the Bronx, which are areas dominated by working and middle-class Black and Latino voters. This is a time to rebuild from the COVID-19 shutdowns and for real police reform, not combative Defund-the-Police nonsense. Weeding out the shitty cops is what Adams, a former NYPD Captain, can and will do. Center-right in this environment is the right way to go for New York. Trust me on this. I have been there.

Another key element, that should never be overlooked in this equation is that Adams would be the first Black mayor since David Dinkens (That is fucking amazing, there has only been one!). I believe in what Adams is selling, and being a Democrat, he may be an even more effective voice for the city on that issue. Adams is also from my generation, the one that ain’t quite Boomer but sure ain’t X. He’s got that Barack Obama thing going for him. He has grown up in the same milieu as me.

Regardless how this Ranked Choice Voting thing goes – choosing a top-five candidates and figuring an aggregate winner from those ballots – and man it is stupid for a city this size, Adams, who is leading fairly substantially, needs to be the next mayor of New York City.