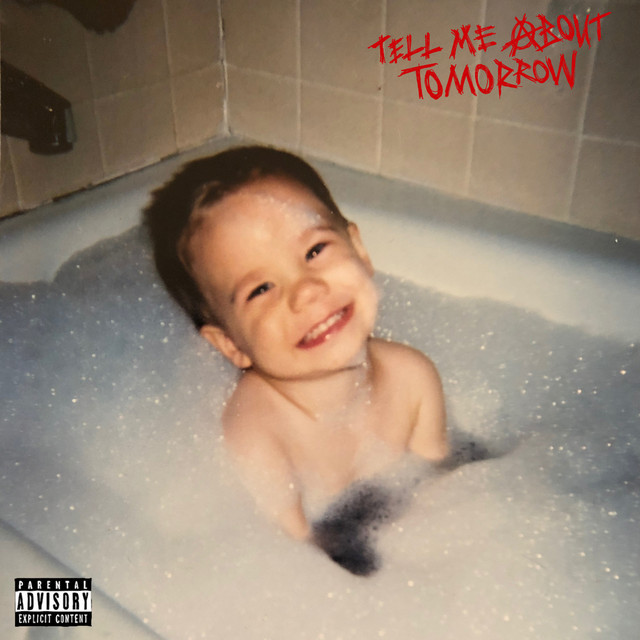 jxdn Shows No Signs of Slowing Down On Harrowing Debut LP, “Tell Me About Tomorrow”

Jxdn’s debut LP is out now and after one listen, we can guarantee that it will leave you over-stimulated, but in a good, rock-and-roll-needed-this, overly infectious sort of way. One listen to “BRAINDEAD” and you’ll understand.

If there’s one thing we know about Travis Barker, it’s that every single thing he touches turns to gold – figuratively, of course, but also literally, if you think of the variety of RIAA-certified Gold plaques he and his inner circle has.

From pop and rap to up-and-comers and established artists, Travis Barker knows exactly how to mold a song, album, and person into the most astronomically well-versed piece of art with an amalgamation of skills and support backing their tenacity, passion, and – of course – talent.

Jaden Hossler, better known in the industry and on the Internet as jxdn, was not the first artist that Barker took under his wing and worked alongside to craft something ferocious and new, eye-catching and authentic. Jxdn was, though, the first artist that Barker signed to his label DTA records. With a little help from his own children, teenagers Landon and Alabama Barker, as well as the video streaming platform TikTok, Barker found promise and possibility in the likes of rising punk rocker jxdn. Together, the two have worked diligently to reinstate this edgy, evocative sound into the mainstream. For 10 seconds you can live through this punk rock partnership coming to fruition on “INTRO,” the opening to this album that is solely a voicemail Barker left about the budding Hossler.)

The world we are living in has had it’s fair share ups and downs, especially as of late, but this musical duo’s original take on the moshpit-inducing sounds that the likes of Barker’s own Blink-182 and Green Day cemented into our lives earlier in this century, has put the world onto the path of new wave pop punk. Jxdn is the young tour de force fronting this rocking mission.

Only 20-years-old, the Texas native turned global sensation released his debut album, Tell Me About Tomorrow, this past Friday, July 2. The record is 18 tracks of mid-to-late nineties vibes mixed with undertones of what our favorite early 2000s basement shows sounded like. Although, both of those only hold up in 2021 due to the high level of professionalism and pride found within the entirety of the tracklist that will surely carry this record into the coming decades and beyond.

Together, Barker and jxdn approached making a punk-esque album in the 21st century with the knowledge that we are in a surge of urban-influenced music taking over not just the airwaves, not just streaming services, but the multimedia we are immersing ourselves into, such as Instagram and Tiktok, but also television shows and movies. Therefore, the pair were slick with the inputting of modern hip-hop inspo and hints of surprisingly harmonious trap within this primarily rock album. Having that emo rap edge among the poppy melodies and memorable guitar riffs – which are not to say that the bass lines and drum beats aren’t mesmerizing and head-banging – let this newrecord shine in the fresh-faced way it deserves.

Yes, there is evident pull from the stylings of “All the Small Things” and “Welcome To Paradise,” but it’s not overkill. It’s just fun, really. There’s still that balance of what is already dominating Top 40 radio and chart-topping alternative lineups, though, such as “Bloody Valentine” by Machine Gun Kelly (who is part of TMAT’s scintillating lead single, “WANNA BE”) and “t r a n s p a r e n t  s o u l” by WILLOW. Both of these are not so coincidentally produced and co-created by – you guessed it! – Travis Barker. Having the  multi-hyphenate drummer in his back pocket gives jxdn a leg up, because he gets to make music that is grunge meets pop meets hip-hop meets rock that is so cohesive, elegant, and successful without even a single skip being found in his whole entire discography. Regardless of the garage band sound he is emulating and enjoying creating, he has a clear path in mind that his friends, mentors, and peers understand.

Just looking at these 18 songs, you see that MGK himself, as well as Iann Dior, have features on Tell Me About Tomorrow, furthering the idea that this new age of punk rock can be so much more than three-chord guitars and Warped Tour symbolism. Jxdn and this new release took the road Kelly paved with Tickets To My Downfall last year and drove down it at full speed, pedal to the metal, with Barker playing the role of the greatest, edgiest, backseat driver (and producer) in existence. (The below performance of jxdn’s single, “So What!,” from last year depicts that flawlessly.)

Tell Me About Tomorrow is as harrowing as it is bouncy and rocking. It is fiery in musicality and lyrically poignant. These are songs that can take over the world. A massive billboard in Times Square and upwards of six million monthly Spotify listeners don’t even hold a candle to what we believe will be the success of this record. There are vibrant, much-needed punk rock tendencies mixed into jxdn’s youthful and clever lyricism. His own vocal range is clearly growing, too, blending flawlessly with the over-the-top, perfectly vivacious instrumentation that backs them. Having that balance and structure in mind is putting this album and this artist on a higher pedestal then his EP, Angels and Demons, never could have. (And we loved that!) Tell Me About Tomorrow is concise and thought-provoking, but more entertaining and exhilarating than anything else. 18 tracks of reflection, reality, and rocking out is everything and more in this day and age of music and pop culture. Who doesn’t want anthemic, electric, goosebump-raising, and emotive songs added to their own playlist for their day-to-day life?

What jxdn made sure of, with the help of his revered mentors, was put his own demons, quite literally, in a box and tie it with a pretty bow. This glossy, musical bow holds all these inner feelings and mental struggles together through music. With his original songs and expressive crooning, shouting, moaning, and belting, jxdn created a home for his own struggles to live out in an artistic sense. This said home is that demon-filled box that was wrapped tightly for the world to open and look through. He relates to his young, confused, burdened peers while opening up doors for listeners to understand the soul-crushing, heartbreaking issues that come alongside depression and anxiety. Pressures, confinement, conforming, and hatred can pile up on someone. This album is releasing that into the world for everyone to connect to, which is something so clear right from the get-go and lasts all the way until the final, concluding song – the album’s distress-laden, to-the-point title track.

Jxdn himself seems to have been able to get these once bottled feelings off his chest, take the weight off his shoulders, and throw it into a monumental pop punk album. Every verse, chorus, bridge, breakdown, and solo navigates the inner workings of a human being simply trying to go about life and tackle first loves, the public eye, internal struggles, family life, and the social tension surrounding the time and place we live in. “A WASTED YEAR” and “PILLS” are challenging songs that are telling and tortured, while also being cathartic and healing in the most musically sound and stylish way possible.

Dancing and screaming alongside music that is raw and vulnerable just proves what good songwriting and even better production allow. Jxdn and his team opened up a world of new wave punk during an era where that’s all people needed to let go – or at least learn how to do so. Life is so much more than tragedy, than relapses, than broken hearts, than demons…. Life is about understanding that resounding feeling of hope and connection can come from any corner of life once you are willing to explore it, which may not come easily, but jxdn respect that that and let’s each listener step into his shoes while on this rollercoaster young adult life, to not just learn from or reminisce within, but rock the hell out to in every sense of the phrase. Thank you, to the ever-epic Travis Barker for putting jxdn on the modern punk map as he deserves – as we deserve. This collaborative record is impressive, inspiring, melodic, defenseless, and quite possibly a bit surreal.

JXDN’S DEBUT LP, TELL ME ABOUT TOMORROW, IS OUT NOW ON ALL STREAMING PLATFORMS!