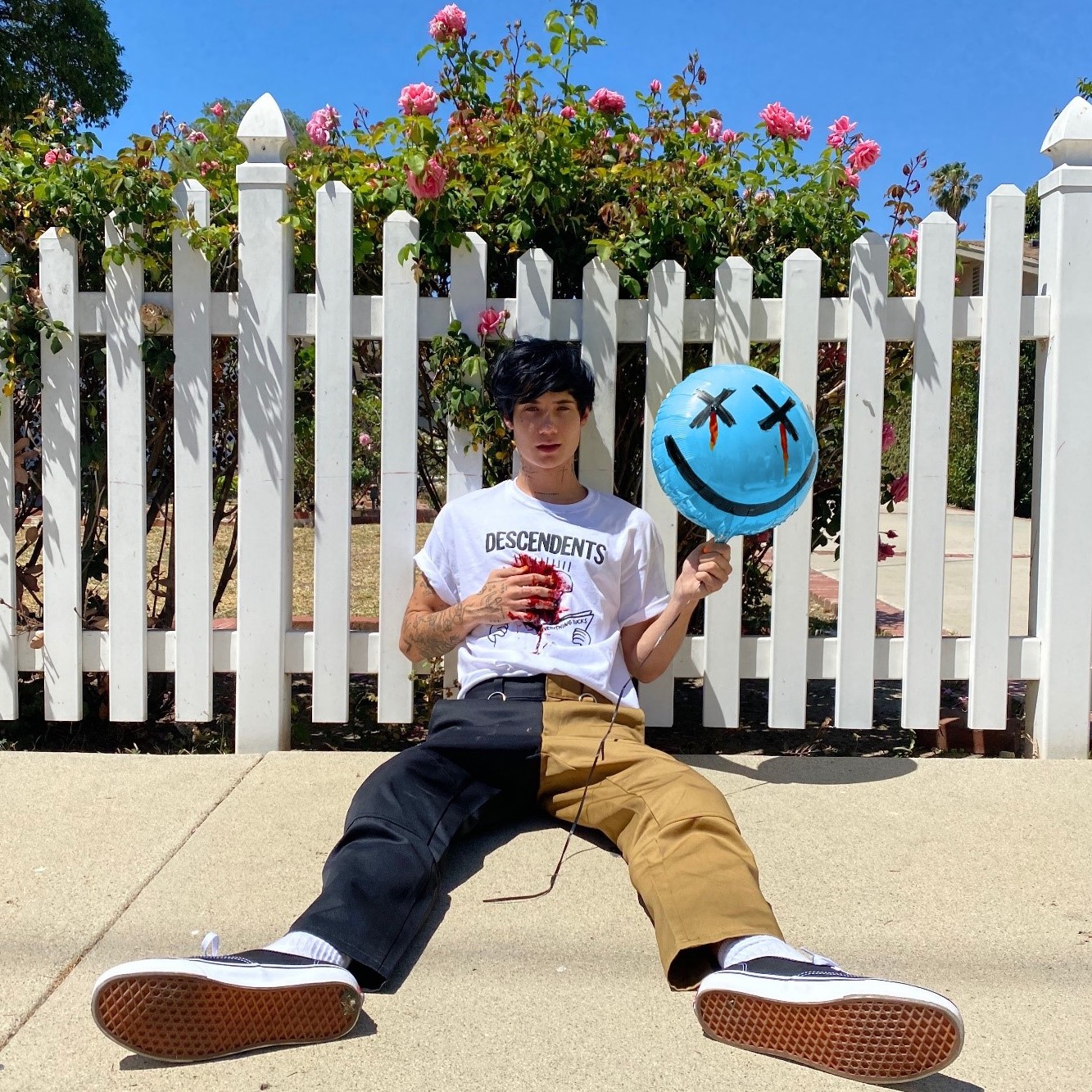 A somewhat virtual, but very much live sea of tattoos, iPhones, special guests, excitement, and screams awoke something new in the ever-growing fandom of jxdn the night of July 17.

Tell Me About Tomorrow got a chance to hit the stage… the virtual stage, that is. Fans around the globe tuned into Jaden Hossler’s live stream concert this weekend, which was live – Yes, actually live – from the famed Roxy Theatre in Los Angeles.

For someone who has yet to truly tour, or even perform live in a setting such as this one – Hossler, better known as jxdn in and around the industry, demolished the stage. His high energy stage presence is riveting and made what was an hour-long set feel like a few minutes at best. (We don’t know whether to love or hate that… maybe a mix of both.) Every song is, or will become, a hit, every look into the camera was screenshot-worthy, and every moment was a reminder as to why he was the very first artist signed to Travis Barker’s DTA Records.

Jaden Hossler is a diamond in the rough. He is able to capture the attention of the greatest, most skilled artists within the pop punk and alternative rock scene, keep their talents and respect in his back pocket, and go about his career in the most authentic and vulnerable way possible. Yet, at the same time, as seen at The Roxy, the star is so much more than his lyrics… and the struggles that they came out of. Very few musicians can be themselves and adapt to their surroundings. Jxdn has, though. He has absorbed little bits of Barker, little hints of Machine Gun Kelly, little hints of All Time Low, and more. Through this he has crafted his own narrative. Through music, jxdn is owning up to not just who he is, but who he can be with enough determination and passion.

This dynamic live stream is just another accomplishment in jxdn’s young career that comes from having this tried-and-true equality of influence and authenticity. It grabs your attention right out of the gate on his latest release, Tell Me About Tomorrow, in the same way that he does the minute he hits the stage and rips into “THINK ABOUT ME.”

The Blink-182 drummer and critically-acclaimed collaborator stopped by The Roxy alongside 24kgoldn and Nessa Barrett (featured artists, friends (and more than friends) of jxdn). Fans around the globe were treated to these guests and a variety of bangers as the musician covered a lot of his debut’s ground, and he also made sure to break down just how grateful he is for the fans who bring the most genuine smile to his seemingly hardened rockstar face. “I want y’all to know that, like, nothing I do and shit is role model-ish or anything like that. I’m not perfect, but I’m here because of y’all,” he paused mid-show to express to not just the in-house fans, but those watching at home.”Thank you – seriously. I don’t think artists appreciate enough what people do. I seriously wouldn’t be here with you.”

Jxdn even went as far to show his gratitude and kindness for his platform and music career by giving a fan who had a matching tattoo as him a guitar. A stunning electric guitar that was sitting at the side of the stage ready to be gifted to a lucky, adoring audience member who played guitar themselves. That’s a page out of Billie Joe Armstrong’s book and we love it.

There is also notable electricity and drive laced into these borderline melancholy stories, but it’s enthralling and relatable top to bottom. The most mesmerizing aspect of the live stream was just how spot-on the TikToker turned rockstar’s voice was in comparison to songs we have all streamed many times and heard on the radio even more. Therefore, furthering his authenticity and proving that there are no frills, no auto-tune, and no doubt about the top tier quality of this rising musician’s musicianship.

His vocal tone is raw and youthful, but not understated in the least. Each song, in its highest and lowest register, takes each and every listener into his mind and allows you to feel the emotions and have the fun that he did not only creating these songs but growing from the individual moments and feelings they are derived from. If he wasn’t as personal and overtly clear in his art, it wouldn’t resonate as deeply as it does. Whether it be onstage, offstage, or in any other setting, Jaden Hossler is Jaden Hossler. Fact.

The level of thrilled we are to see this play out again on even larger, more pertinent stages when he opens up for Machine Gun Kelly this fall is off the charts. People young and old are in for a treat as the resurgence of pop punk grows fiercer than ever with jxdn, Barker, Kelly, standing tall at the forefront…. And jumping off drum kits, as seen this past weekend.

This off-the-wall, so rad, roaring night was all of that and more on display for not just the respective audience to see, but the world at large who have been following jxdn’s career and wanted a chance to immerse themselves in this growing catalog of music through a new lens and within a wilder setting. It paid off so phenomenally for both the jxdn team and music lovers everywhere. From the set list and the lights to the audience and the chat room, every little, intricate aspect of this virtual (mostly virtual) event was done to perfection. Whether the song was stripped down or rip-roaring, the set was rockstar perfection.

It felt almost heroic in the way that jxdn was able to tear up the stage and smash his debut record’s release party live stream in the way that he did. No pandemic, no Internet drama, no auto-tune, no real world problems came through at the moment. It was all about the dedication and talent, feelings and emotions, being brought to life at the hand of Jaden Hossler, smashing electric guitars, sick bass lines, and memorable drum beats. That’s all Tell Me About Tomorrow is and all that jxdn’s career is based off of. Who needs anything else?

TELL ME ABOUT TOMORROW IS OUT NOW! JXDN HITS THE ROAD WITH MACHINE GUN KELLY ON THE TICKETS TO MY DOWNFALL OUR THIS FALL! MORE INFO CAN BE FOUND HERE!