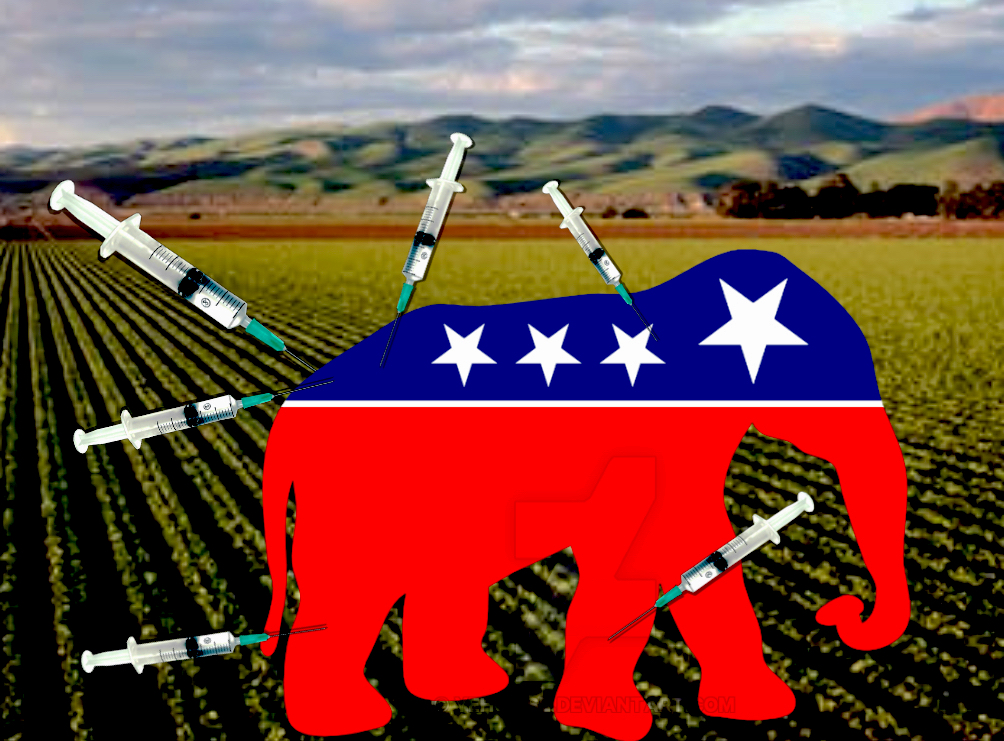 After a year of claiming the COVID-19 pandemic was an orchestrated fraud on the American people, overrated, a weird flu that will disappear in a few weeks, a way for the federal government to strip its citizenry of its rights, and the ensuing vaccines being deadly tools to control our brains, the voices of the Republican Party have suddenly reversed course. This past week staunch detractors of the vaccine roll-out, cravenly fabricated for political purposes, have begun to quite vigorously implore that their loyal sheep march in a different direction. What the hell just happened?

Firstly, it should be pointed out that most Republican governors, members of congress, cable newsies and other voices from the right never truly believed this anti-vaccine, pandemic-denying bullshit. Most of these people hunkered down in their homes, slathered on the hand sanitizer, and masked up. These same people were the first in line to get vaccinated. There has been a wonderful line of Internet backlash against colossal idiot, Texas Senator Ted Cruz, who a year ago told the world that once Joe Biden won the election, there would be no more pandemic. “He doesn’t even have to be sworn in,” Cruz proclaimed. “It will suddenly disappear.” Cruz, for the record, is vaccinated. His family, at least the ones who didn’t conspire to kill JFK, is vaccinated. Yet, he continues to take to the floor and rail against all of it. He is a phony. It is a political show to secure the former lunatic president’s slack-jawed base. No one believes any of it.

This shameless circus of hypocrisy brings us to the second issue: The Delta variant.

In the past few months, a second wave of a more aggressively infectious COVID virus has spread throughout the U.S. Depending on your source, ninety-eight to 99% of those who are infected (and the numbers are rising every day) are un-vaccinated. The three worst states are Cruz’s Texas, run by Republicans, Missouri, run by Republicans, and Florida, run by one of the most defiant anti-vaccine psychos, Republican Governor Ron DeSantis. One of the leading opponents of shutting down his state to curtail the spread of COVID last year, Florida had dips and spikes in the infected and the fallen like no other state. Now Florida finds itself at the epicenter of this new outbreak (45,000 new cases, 10,459 in June). There is widespread panic, especially among the elderly, a fair portion of the state’s population. But if last year’s ignoring of thousands of deaths is any indication, DeSantis doesn’t give a shit about old people dying. DeSantis cares about Republican voters dying.

Nearly seven out of ten Republicans refuse to be vaccinated. These are mostly the voter base of the party – white and uneducated, or what is left of this cult. Do the math. If 99% of the unvaccinated are getting infected by the new variant and 70% of these victims are Republicans, and you run a state that routinely has a one to 3% victory margin, then the governor cannot withstand losing votes to the Grim Reaper.

Here is DeSantis two days before I’m writing this: “If you look at the people that are being admitted to hospitals, over 95% of them are either not fully vaccinated or not vaccinated at all. These vaccines are saving lives. They are reducing mortality. Telling them that the vaccines don’t work, I think that’s the worst message you can send to people at this time because I think that the data has been really, really good in terms of preserving people.”

Can a columnist write WTF?

I think I just did.

Getting back to Texas, according to a recent Texas Tribune report, the state has endured nearly nine thousand COVID deaths since February. All but forty-three were unvaccinated people. Not sure what nearly 100% of eighty-five hundred people comes to, but as far as I can tell that is a lot of dead Republicans.

The other day, my pal, proud Republican and fierce anti-Trump voice, S.E. Cupp took to CNN airwaves to make this very case. “Republican politicians and right-wing radio and TV voices are literally killing their own voters,” she said. And for a shrinking party who has chosen to run amok all over voter and democratic rights to remain relevant, this is not a winning strategy. Within hours of Cupp’s declaration. FOX News nighttime rodeo clown Sean Hannity implored his listeners for the first time since the pandemic hit in early 2020 to take it seriously and get vaccinated. A lapdog shrill for Donald Trump for four years and the purveyor of the worst conspiracy propaganda around, with the notable exception of comedian Tucker Carlson, (also vaccinated), who continues to rail against vaccines nightly, Hannity can nonetheless see the writing on the wall.

It is bad politics to kill your voter base. If you are going to make up stories about Trump winning the previous election, the one he was smoked in, to keep the thing breathing, why put a pillow over its face?

If this all sounds the bottom of the barrel being scraped, you know your sounds. But I add, again, for those with political aspiration. Keep those in your camp breathing. Helps come election day.