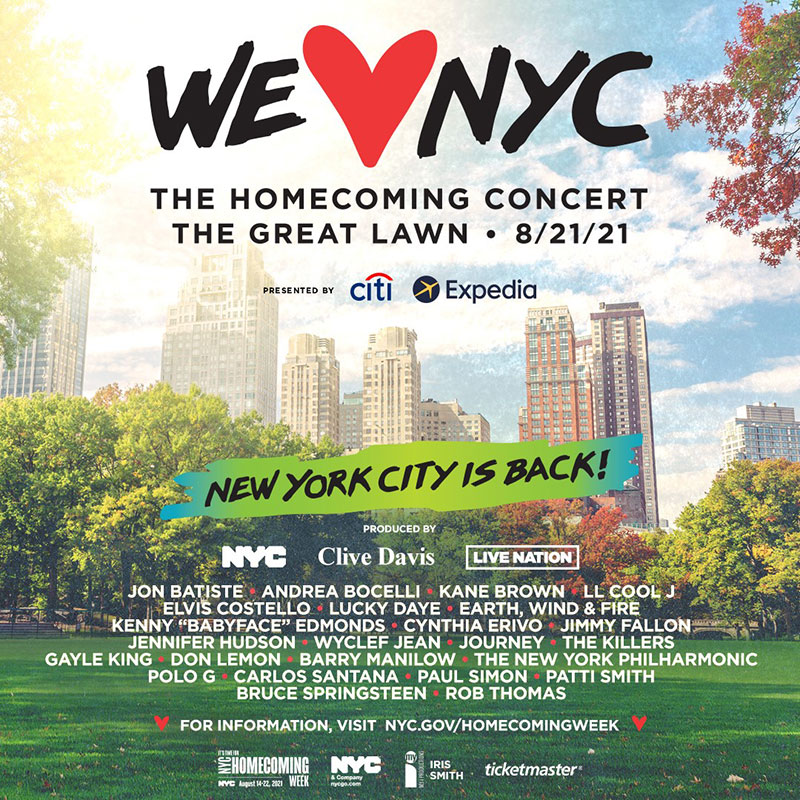 “We Love NYC: The Homecoming Concert” at Central Park on August 21

Mayor Bill de Blasio announced yesterday an updated program for “WE LOVE NYC: The Homecoming Concert produced by New York City, Clive Davis and Live Nation.” The concert will be staged on the Great Lawn in Central Park on August 21. The concert also will air live on various CNN television and online networks.

“This is going to be an historic, monumental moment for all New Yorkers and all Americans. I’ll put it plainly: You’re going to want to be here. This is truly once in a lifetime and we thank Clive Davis, Live Nation and Danny Meyer for all their efforts to help make this possible,” said Mayor de Blasio. “This is a celebration of our city, of every working family who faced incredible challenges last year and overcame. This is a celebration for you.”

For ticketholders, proof of COVID-19 vaccination will be required for entry. Given the outdoor setting and vaccination requirement, the wearing of masks will be optional. Reasonable accommodation will be provided for persons unable to get vaccinated because of a disability.

Tickets will become available on Monday, August 2nd at 10 A.M. at NYC.Gov/HomecomingWeek. Eighty percent of the tickets will be free.

Citi® and Expedia® are sponsoring the event. Citi card members will have access to purchase presale VIP tickets beginning Thursday, July 29 at 10 a.m. EDT until Sunday, August 1 at 10 p.m. EDT through the Citi Entertainment program. Presale details are posted at citientertainment.com. Additionally, Citi will be giving away 1,000 general admission tickets to Citi® card members on a first-come, first-served basis beginning on Monday, August 2 at 10 a.m. EDT. Expedia also will give away up to 1,000 concert tickets to select Expedia Rewards members, and provide a variety of other ways for travelers to win tickets in the lead-up to the event. In addition, admission tickets will be released to the public in batches at nyc.gov/HomecomingWeek starting on Monday, August 2 at 10 a.m. EDT. Additional free and VIP ticket release dates and times are as follows:

On the day of the show, the public will be admitted into the Great Lawn beginning at 3 p.m. The concert will begin at 5 p.m. and is expected to run until 10 p.m.

“There is absolutely no place more special than Central Park to celebrate the reopening of New York City,” said Davis. “I consider the Mayor’s request a true honor; and, with Live Nation, we are curating an unforgettable show befitting of this historic occasion.”

“Live music has the unique ability to bring us together,” said Gordon, Regional President, Live Nation. “We are excited to join Mayor de Blasio, Clive Davis, and Danny Meyer in producing this special night of live music as we reconnect fans with some of their favorite artists in Central Park for the WE LOVE NYC: The Homecoming Concert.”

“New Yorkers know that their city is waking up and coming back strongly—and I can’t think of a more uplifting way to celebrate than to enjoy live music from some of the world’s most renowned artists, on the Great Lawn of NYC’s Central Park,” said Meyer, Board Chairman of the NYCEDC and CEO of Union Square Hospitality Group. “I’m thrilled to join Mayor de Blasio, Clive Davis and Geoff Gordon for what I know will be an event for the ages.”

NYC Homecoming Week will run in the five borough from August 14 through August 22. The highlights will include live concerts in the outer boroughs produced by the Universal Hip Hop Museum; free movie screenings by Rooftop Films; cultural activities and public art; NYC Restaurant Week, Summer Streets and other programs.

The NYC Homecoming Week concerts schedule is as follows. The public can receive emails with updates by registering here.

Monday, August 16th at Orchard Beach in the Bronx