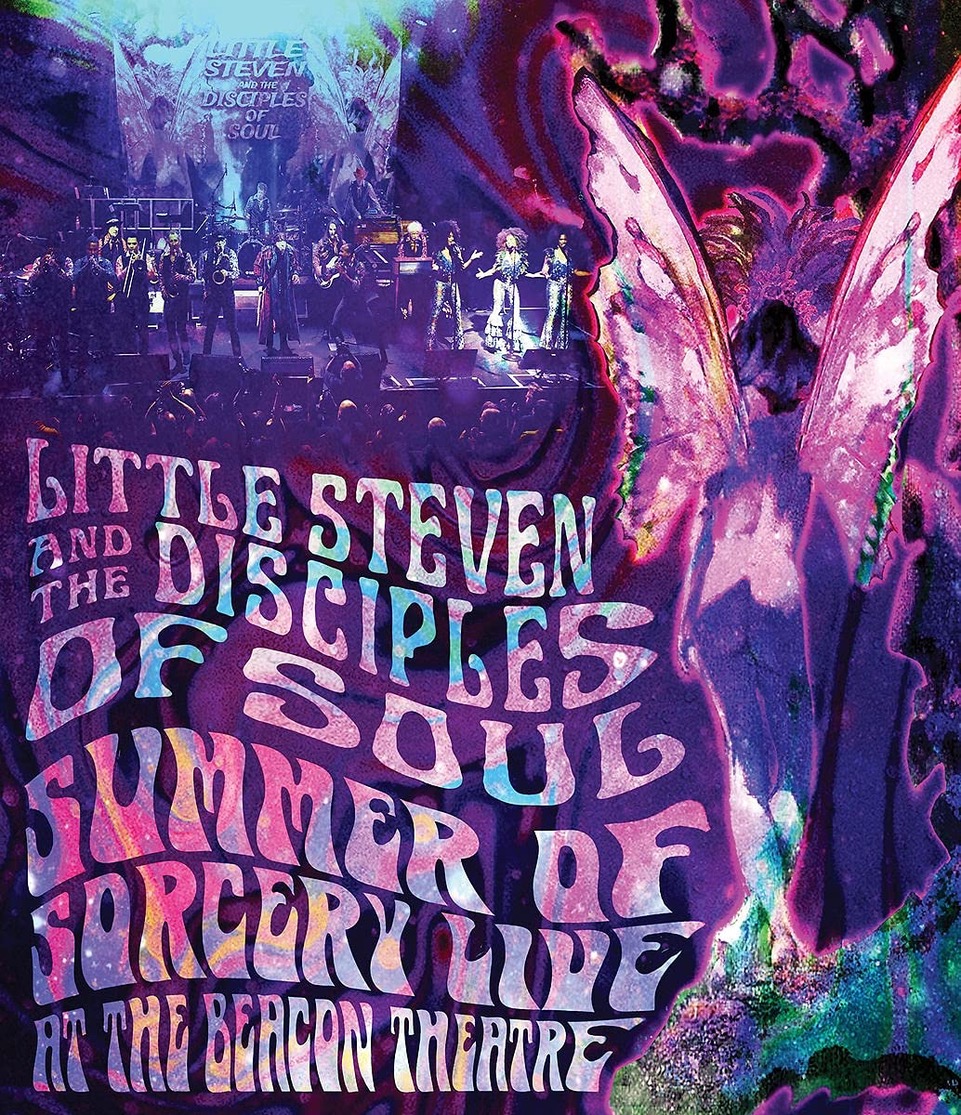 On The Record: A Must-see Concert Blu-ray from Little Steven, Plus Joan Armatrading

If you weren’t among the lucky folks who scored tickets to one of the 2019 concerts by Little Steven & the Disciples of Soul, you have a second chance to witness the extravaganza on a new Blu-ray. Called Summer of Sorcery Live at the Beacon Theatre, the concert is also available on three CDs, which are worth having for times when you can’t be in front of a screen. If you must choose, though, buy the video because without the visuals, you’ll miss a lot.

I can’t imagine a better at-home introduction to Little Steven (aka Stevie Van Zandt) than this Blu-ray. It exudes his passion for music and love for a wide range of genres and suggests that he has even more fun at his gigs than anyone in the audience. Over three hours and 15 minutes, he and his stupendous 14-member band – which includes two percussionists, three high-energy backup vocalists, and a knockout horn section – take a deep dive into contemporary and early rock, pop, blues, Latin music, and more. The video, which offers DTS-HD Master Audio, prominently features numerous guest artists, underscoring Van Zandt’s penchant for sharing the spotlight with musicians he admires.

One highlight of the concert is a nod to Southside Johnny & the Asbury Jukes consisting of three songs that Van Zandt co-wrote with his E Street Band buddy, Bruce Springsteen: “Trapped Again,” which Southside helped them to compose; the classic “Love on the Wrong Side of Town;” and “Little Girl So Fine,” which sounds redolent of the Drifters and is intended as a tribute to pioneering songwriters Jerry Leiber and Mike Stoller.

Other treats, all penned by Little Steven, include “A World of Our Own,” which also harkens back to early and mid-sixties music; the exuberant “Party Mambo!” and “Out of the Darkness,” which seems like something Springsteen might have written. Also excellent is the Youngbloods’ “On Sir Francis Drake,” which features that group’s Lowell Levinger (aka Banana), who now plays electric piano, guitar, and esraj (an Indian stringed instrument) in the Disciples of Soul. Another standout is a version of Springsteen’s “Tucson Train” that Van Zandt describes as “my far more modest attempt to do [for Bruce’s Western Stars album] what Jimi Hendrix did for Dylan’s John Wesley Harding with ‘All Along the Watchtower.’” And then there’s the title track, “Summer of Sorcery,” a moving, beautifully sax-spiced 10-minute tour de force that Little Steven dedicates to his wife, Maureen.

Van Zandt explains during the concert that while it was appropriate for him to discuss politics onstage during the 1980s when much of the “bad stuff was hidden,” we’re now “drowning in it 24/7.”

He says, “I think our usefulness at this point is to give you a break from the politics for two hours.” Thankfully, though, he can’t resist immediately following that comment with a well-articulated rant about politicians who lie and give us false choices; then he sings his “I Am a Patriot,” which he dedicates to climate activist Greta Thunberg. Later, he offers “Sun City,” his 1985 response to apartheid in South Africa, which features Peter Wolf, the former lead vocalist for the J. Geils Band.

Seven bonus tracks, recorded at a variety of venues, include such goodies as “Moon Tears,” by the E Street Band’s Nils Lofgren, who guests – and shines – on guitar; Van Zandt’s “Ride the Night Away,” a high-octane rocker where he shares dynamic vocals with Jimmy Barnes, lead singer for Australia’s Cold Chisel; a reprise of “Sun City” that combines snippets from multiple concerts and features contributions from Springsteen, the E Street Band’s Jake Clemons, Garland Jeffreys, and others; and “Groovin’ Is Easy,” with fine lead vocals by an 80-year-old Nick Gravenites, who co-wrote the song for his great sixties band, the Electric Flag.

That number isn’t the only oldie among the bonus tracks. Van Zandt also delivers the Animals’ “Club-a-Go-Go” and even resurrects the Dovells’ million-selling 1961 hit, “Bristol Stomp.” Despite its anachronistic lyrics, which reference a “deejay hop,” a “groovy beat,” and dances like the twist and the pony, he performs the song without a hint of condescension or parody. Van Zandt genuinely loves this kind of stuff – and if you don’t already love it yourself, you just might after hearing his wonderful performances.

(The Beacon Theatre show, incidentally, was recorded just a few months after I sat down with Little Steven for an extensive interview that covered his political activism, his music, his role in The Sopranos, his relationship with Bruce Springsteen, and more. This page will direct you to the interview as well as to video excerpts and outtakes from our talk.)

Joan Armatrading, Consequences. Like Frank Sinatra, Joan Armatrading has always done it “my way,” and never more so than on this 22nd studio album. The photos in the booklet that accompany the CD aren’t selfies, but she’s responsible for almost everything else here. She wrote all the songs, played all the instruments, provided all the vocals, and is also credited with recording and engineering the record.

Though Armatrading injects enough inventiveness into Consequences to keep it sounding fresh, it hardly represents a change of direction from the music she has been delivering throughout her almost half-century-long career. Armatrading is still serving up rhythmic jazz- and blues-inflected rock songs that focus almost exclusively on love relationships.

The complex yet accessible music underscores the upbeat lyrics, which limn a world where romantic love conveys magical powers and makes life worthwhile. In “Glorious Madness,” for example, she sings that “my mind is blown with this crazy love” while in “To Be Loved,” she proclaims, “Every day feels like a weekend with you around, every day is a holiday when you hold me tight.” In “Already There,” meanwhile, Armatrading confides that a declaration of love makes her feel “like I’m flying, and the sky is all mine…I’m floating on air.”