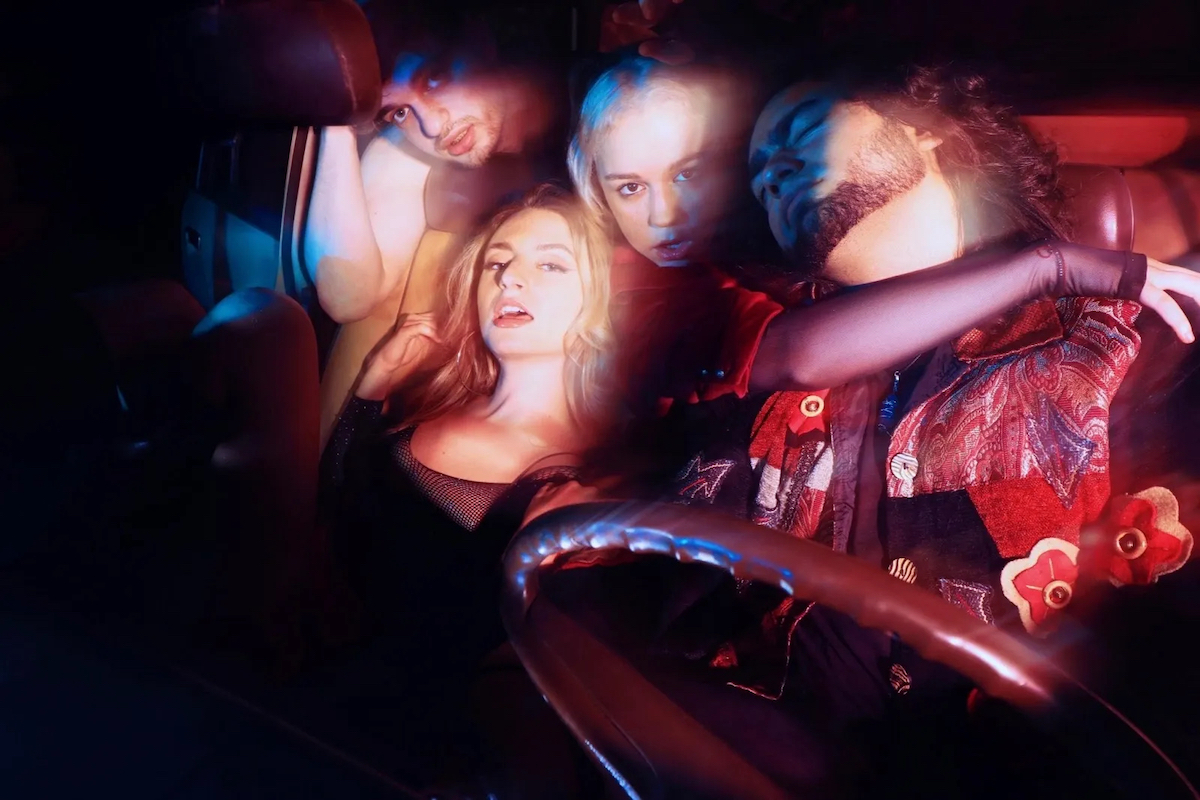 Miami is known for many things – the electric nightlife, South Beach, Cuban coffee, Pitbull… the list goes on and on. Tourist traps and famed rappers aside, the beloved Florida city is also home to one of the most promising rock bands of the decade.

Bruvvy, a four piece hailing from the shores of Miami, is a band ready to raise the bar when it comes to the energy, excitement, and expectations associated with rock and roll. Their grit is authentic, their style is electric, and their talent is unmatched. It might be a party everyday for this boisterous new band, but it’s a party that has a theme of dedication and originality. Having fun and owning up to who they are in and out of the music industry is exactly what Bruvvy is about. Their highly-anticipated EP, out tomorrow, puts that on display for the world to see.

The young, vivacious, personable rockers are rooted in spirit. No, not the kind of spirit that high school cheerleaders possess or the type of spirit in relation to ghosts and goblins. These musicians, this band, and their music are spirited. Every moment Bruvvy is on stage is an Earth-shattering one. All of who they are is dynamic, sultry, animated, and fun. Are there some socially-sound, culturally-relevant themes throughout? Sure, but that’s just once again who they are. Everything, even this chat, showcases what Bruvvy genuinely wants to say and put out into the world. A little feminist-tinged hard rock/pop punk manifestation never hurt anyone, right?

Having fun through spirit-filled songs and sweat-dripping shows is the foundation of Bruvvy and their music. Little Heat, this new record of just five psychedelic, occasionally sentimental, but predominantly angsty hits, will remind you all of what rock can be like in the digital age, in the streaming world, and in a time where people’s rock radar doesn’t stem far enough from the likes of Machine Gun Kelly and the occasional Billie Eilish tune (both of whom we love).

Through chatting with the equally thoughtful and thought-provoking Liz Varum, we were able to further amplify the depth of dedication and the reality of emotion laced within the Little Heat EP – and truly everything this band has done since their Southern Florida inception in 2019. Varum, Bruvvy’s respectful and radiant vocalist, is committed to all her band has in the works and up their sleeves.

We think it’s so important to start off with the fact that live music and in-person, on stage performances have truly helped share who you are as a powerful, genuine rock band and not some angst-laden group running up numbers on streaming services – even if that was how you made a name for yourself amid the venue closure of the pandemic. As much as we acknowledge that, how has being true performers, especially in a live setting, played into the way you make music and explore your rocking sound?

With Bruvvy, live is everything. Even when we’re in the studio, we go out of our way to try and capture that magic that lives in our live performances. Our recordings are very minimally polished and have few layers – very rough around the edges. Live music is imperfect in that way; it’s messy and you can’t really hide anything. We were molded by that energy, that on-your-toes, what the hell is going on, no time to think zone where you can lose control and free yourself. Everything we write screams real, screams live.

So much of your music, but most certainly this new EP, can (and will) translate well on stage. Bruvvy’s sound is vivacious and exhilarating with lyrical content that is not only fun and relatable, but high quality. Where do you look to for inspiration and influence before heading into creating a song like, say, “Not For Sale”?

Lyrics are always written on the fly. I believe that there needs to be an element of spontaneity in order for the words to ring true and for the emotion to be delivered authentically. “Not For Sale” was written in a moment of anger outside of a Target parking lot…. Let’s all take a moment to laugh at that.

We had already written the structure for the song and I was listening to our rehearsal footage in my car after a really bad day at work. The words poured out of me, I had no time to stop and think about what sounded right, I just wrote down exactly what I wanted to scream into my boss’s face that day. In that moment of fury, I not only found the words that could resonate with others, but I found a way to cope with what was previously rotting inside of me.

Personally, as I told your publicist, “U Think This Song Is About U” is my very favorite of yours thus far and quite possibly my ‘song of the summer.’ It’s fun and slick, savvy and clever, with more musicianship than can even be comprehended on the first listen. On your end, why was this chosen to be one of the singles for this EP of yours?

“Song of the summer” is actually exactly what we called it as soon as we wrote it. This song is so much fun, and we noticed that upon release, it also fit perfectly into the world with everything that was and is still happening with low wages and the mistreatment of employees. We are still getting messages from people saying how much they relate to the lyrics.

Little Heat, the EP, comes off as this edgy, grungy, modern rock take on The Go-Gos and Nirvana and a bit of NYC icon Liza Colby. What do you hope listeners take away from these songs and this musical package from Bruvvy, because it’s just as deep and vulnerable as it is danceable and concert-ready.

We will always deliver exactly what we want to receive in return – authenticity and truth. From the arrangements to the lyrics to the relationships that we have with our team, supporters, and each other, everything that we put into the world is built on being real with yourself and everyone around. We have nothing to hide. We want everyone that listens to this EP to lose that tight grip they have on themselves and feel empowered in that freedom. We want this EP to be rude for those that are forced to be polite, to be loud and obnoxious for everyone that has grown accustomed to whispering. We want to be everyone’s ‘drunk girl in the club bathroom that encourages you to leave your cheating boyfriend.’

From everything we have seen and heard so far from you, the Bruvvy brand seems so perfectly curated. Every image, video, song, cover art, and everything in between feels so raw and yet so playful. When coming into this overarching aesthetic of this rising rock band, did you set out to be this über-cool, fun-loving group? Or is that simply who you are and how it is interpreted?

This band started because we wanted to party together. We started as friends, and without that bond the band would simply lose its purpose, so, fun-loving is definitely spot on. When it comes to cool though, I think that we had to grow into that a little bit. We all feel extremely empowered on stage and have this rockstar persona that we can’t help but slip into – it happens naturally. We’re pretty transparent, really. What you see is what you get.

Your musical catalog is still growing, which is something we have been so excited about since the previously written and ear-worm-worthy “Sarandon” released. If you could tell people to listen to one song of yours as of right now to really get a feel for who you are as a band and what you’re working to become, what would it be?

I think the song that sums up our energy perfectly is “Attn:” which is the first track off Little Heat. It’s ultra riffy, super powerful, and in your face. The song is about turning your attention to something that lights you up.

How has being a female-fronted band, not just in the rock genre, but in this tense social and political climate, affected what you do or where you stand as artists – if at all? What does it mean to you to sort of continue on with this time of breaking stigmas and being fiercely honest with your artistry?

To be honest, both myself and Paula [Bunich] never really thought twice about the fact that we were “women in rock” until we got deeper into the industry and realized that it was a major selling point. We have never thought of ourselves as “female musicians,” we just did what we felt drawn to do. All my life I’ve idolized frontmen such as Gerard Way [My Chemical Romance] and I always believed that everything he was capable of, I was capable of, too. Being sexy without being sexual, being powerful in my own unique way, I simply chose to believe that it was possible – BECAUSE IT IS. We are proud to be a female-fronted band and are stoked to empower other women, however, the attention needs to be taken off of sex and gender in the music industry in order for us to move forward. It’s not about what we have under our clothes, it’s about what we have to say.

LITTLE HEAT, THE NEW EP FROM BRUVVY, DROPS TOMORROW, AUGUST 20 ON ALL STREAMING PLATFORMS! KEEP UP WITH BRUVVY ON THEIR SOCIALS!