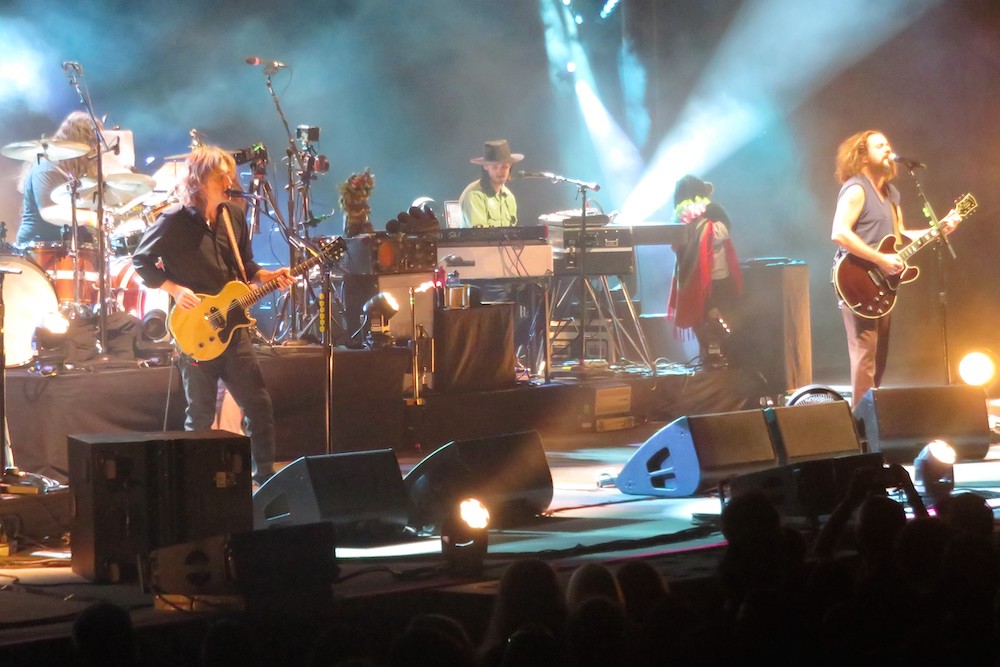 In 2019, My Morning Jacket performed live at Forest Hills Stadium on what was billed as possibly the band’s final concert before going on temporary or permanent hiatus. Little did the musicians know that it would be a 2020 pandemic that would cause them to separate. Nevertheless, those last 2019 shows were so fruitful that the band was later inspired to record a ninth studio album, a self-titled album to be released on October 22. Now in 2021, the band’s first full tour in six years appears to be further stabilizing and reenergizing the band.

Picking up where the band left off in New York City in 2019, My Morning Jacket returned to Forest Hills Stadium on September 10 for the first concert of a two-night engagement. Lead singer/guitarist Jim James came on stage looking like a wizard with his thick and bushy head of hair and a long and shiny cape, which h removed after the first song. Hardly speaking to the audience all night, he and the other musicians (guitarist Carl Broemel, keyboardist Bo Koster, bassist Tom Blankenship, drummer Patrick Hallahan) let his music do the communicating for a little longer than two hours.

My Morning Jacket in concert felt like two bands in one. When James sang, the songs sounded like indie pop. When he walked away from his microphone, the songs ripped into angular, psychedelic jams. Bands like Television capitalized on this sound in the late 1970s, but it is a road less traveled in contemporary rock.

My Morning Jacket presented a career-spanning setlist, including songs from all but the 1999 debut album. Impressively, the choices were unique to this night. The band performed the live debut of “Love Love Love,” the first single from the forthcoming album. Towards the end of the show, the band including a snippet of its rendition of Sly & the Family Stone’s “Everyday People” within “Phone Went West.” Perhaps surprisingly, the set included three songs from the band’s most recent album, The Waterfall II, which was assembled and released in 2020 from rejected songs collected from the recording sessions for 2015’s The Waterfall album. “Wasted,” from that recent vault compilation, was the closer of the band’s formal set and proved to be one of the strongest jams of the night, along with the final encore closer, “Mahgeetah.”