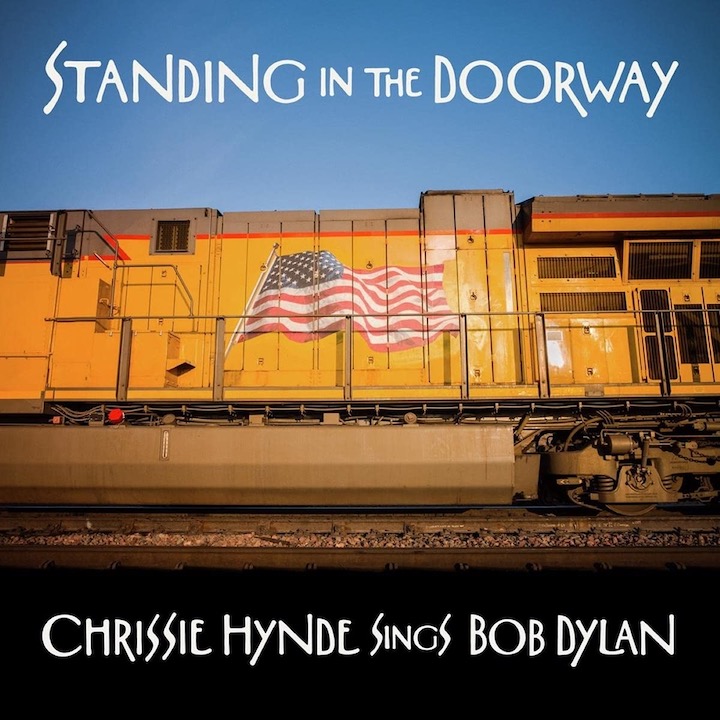 Hundreds if not thousands of artists have covered Bob Dylan but in this writer’s opinion one interpreter has until recently stood head and shoulders above the competition: the late, great Jimmy LaFave. Now it appears we must make room at the top of the heap for the Pretenders’ Chrissie Hynde, whose new collection of Dylan songs is called Standing in the Doorway.

Hynde has long since proven to be a brilliant vocalist and a versatile one. (Listen to the Pretenders’ eponymous debut album and then to The Isle of View to get a sense of her range.) She has also previously issued at least two excellent Dylan covers: “Forever Young,” which appears on the Pretenders’ Last of the Independents, and “I Shall Be Released,” which you’ll find on the album that resulted from Dylan’s 30th anniversary concert in New York. But she really shows what she can do on Standing in the Doorway.

The stellar nine-track program, which sticks to ballads, features a few often-covered numbers, including “Tomorrow Is a Long Time,” Blood on the Tracks’ “You’re a Big Girl Now,” and Bringing it All Back Home’s “Love Minus Zero No Limit” (a particularly gorgeous interpretation that ends with the sounds of the raven that the lyric references). Less obvious and occasionally obscure choices predominate here, however. Among them: the title cut, which first appeared on 1997’s Time Out of Mind, and five tracks from Dylan’s widely panned early 1980s period (the subject of Springtime in New York, the latest edition of his Bootleg Series): “Every Grain of Sand” and “In the Summertime” from 1981’s Shot of Love; “Don’t Fall Apart on Me Tonight” and Sweetheart Like You” from 1983’s Infidels; and “Blind Willie McTell,” an Infidels outtake.

Hynde made the album during the pandemic lockdown with the Pretenders’ James Walbourne. “We did it from home on our phones,” she says. “I did the rhythm, sent it to James, he added guitar, sent it back to me, I put on the vocal, sent it back to him, he put on some backup vocals and organ, then we sent it to [producer and musician] Tchad Blake to tidy up.”

These performances sure don’t sound phoned in, however. Throughout, Hynde’s nuanced vocals prove a perfect match for the material, and Walbourne’s understated acoustic instrumentation – which includes such instruments as piano, harmonium, and mandolin in addition to the aforementioned guitar – is sublime.

If you’ve somehow managed to go through life unaware of Gordon Lightfoot, a new tribute album called Ladies Sing Lightfoot will likely leave you sufficiently impressed to want to seek out the work of that Canadian national treasure. If you’re a fan, on the other hand, you’ll want this CD because it puts a fresh and satisfying new spin on some of his most beloved material and also because it will introduce you to artists whose talent is larger than their reputations.

L.A.-based singer/songwriter Carla Olson assembled the collection, which finds a dozen female singers tackling many of Lightfoot’s best-known songs as well as a few relative obscurities. The 14 tracks span his entire career, ranging from 1966’s “Steel Rail Blues” to 2014’s River of Light.”

Highlights abound. A Norwegian folk duo called Darling West, for example, slow the tempo of the title track from 1974’s Sundown, emphasizing the sadness in this chart-topper’s lyric, while California’s Shayna Adler achieves similar results with a violin and strings-spiced “Carefree Highway,” a number that first appeared on the same album.

Other winners include an upbeat “Cotton Jenny” by the Kennedys; “Steel Rail Blues” by Natalie Noone, daughter of Herman’s Hermits’ Peter Noone; the classic “Early Morning Rain” by Olson’s group, the Textones; Kristi Callan’s “Song for a Winter’s Night;” “If You Could Read My Mind,” one of Lightfoot’s greatest creations, by Susan Cowsill; and the aforementioned “River of Light,” which is sung by Arwen Lewis and features her father, Moby Grape’s Peter Lewis, on guitar.

To justify their existence, cover versions should bring something fresh to the material. Whatever you think of the new All Wood and Led from singers/guitarists James Lee Stanley and Dan Navarro, you’ll have to agree that their renditions of a dozen Led Zeppelin songs accomplish that. In fact, they’re so fresh that it may take you a while to identify the very well-known compositions you’re listening to.

Stanley and Navarro aren’t the first act to radically revamp Led Zeppelin material: see, for example, Frank Zappa’s “Stairway to Heaven” on Zappa ’88 and Godfrey Daniel’s “Whole Lotta Love” on The Doo Wop Box III. But while some past recordings have sounded like parodies, this duo are playing it straight.

“With absolute respect and admiration,” says Stanley, “we chose not to simply duplicate the originals but instead imagined, ‘What if Led Zeppelin had lived in Laurel Canyon in 1967 instead of England?” Their answers to that question include acoustic recordings of “Good Times Bad Times,” “Stairway to Heaven,” and even “Dazed and Confused” that sound more like Crosby, Stills & Nash than Page, Plant, Jones & Bonham. There’s even one nearly acapella number, “The Battle of Evermore,” that seems redolent of the Persuasions.

If you like the album, incidentally, you’ll be glad to know that there’s more where this came from: with other collaborators, Stanley has previously issued CDs that similarly reimagine material by the Rolling Stones and the Doors.

Another new tribute album tips a hat to a member of the acclaimed Uncle Walt’s Band, an acoustic trio known for its inventive blend of folk, jazz, swing, rock, and other genres. In recent years, the Austin, Texas group –which developed a strong local following in the late 1970s and early 1980s – has been the subject of a reissue series that has included, among other things, a live album and an anthology.

Called Mighty Fine: An Austin City Limits Tribute to Walter Hyatt, the new 21-track set underscores how much was lost when Hyatt died in a 1996 airplane crash. The album opens with an 11-song concert broadcast in 1997 that features his bandmates, David Ball and Champ Hood, as well as such artists as Lyle Lovett, Jimmie Dale Gilmore, Willis Alan Ramsey, Marcia Ball, Junior Brown, Allison Moorer, Shawn Colvin, and David Halley. In addition to the material that aired, the CD delivers a half dozen performances that were recorded for but not included in the program as well as four previously unreleased studio tracks by Hyatt, who authored all but four of the album’s 21 songs.