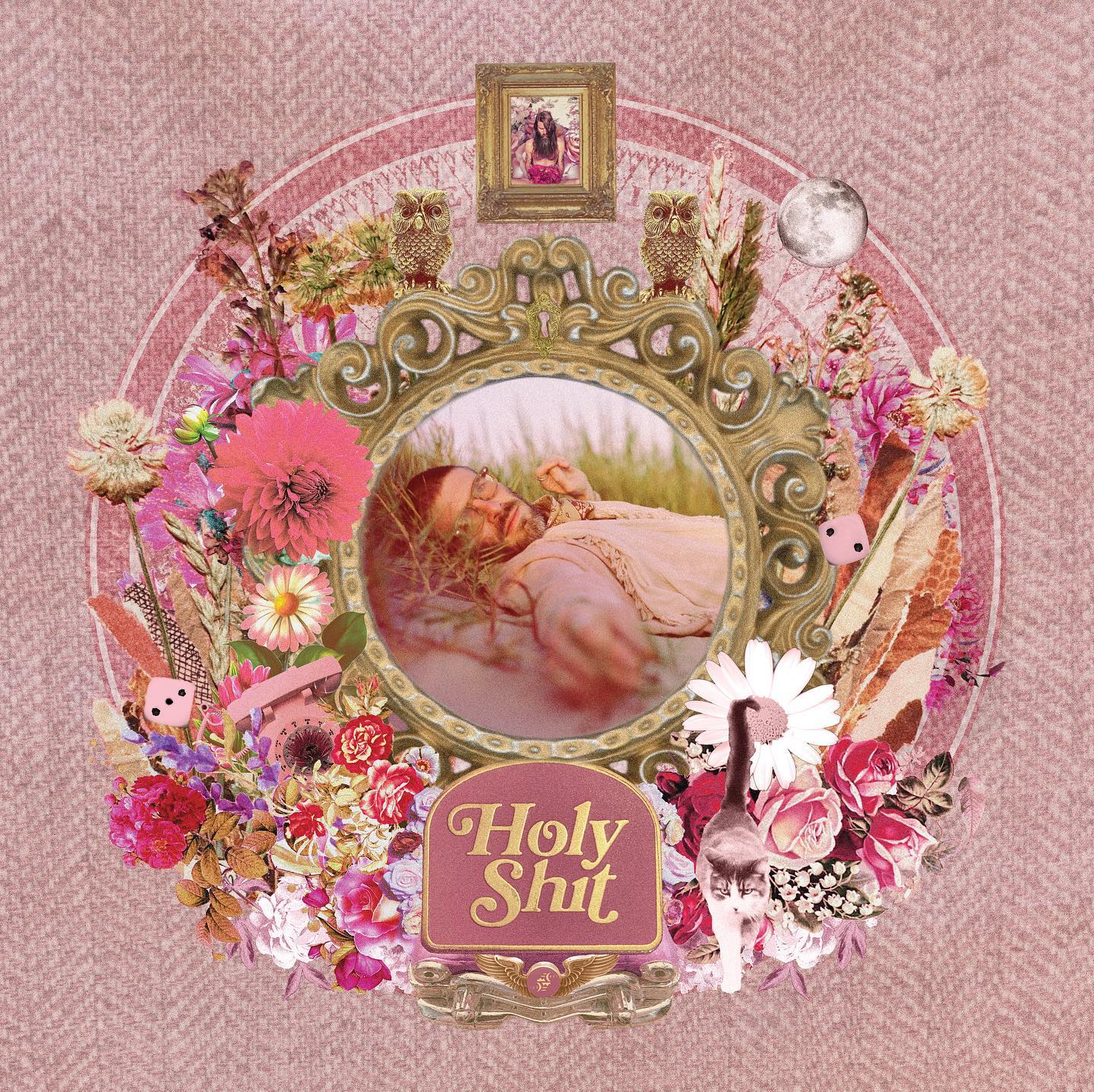 The Thematic World of Zac Clark Shines on New Album

For a pop album that fans are dubbing “simply to die for,” you wouldn’t quite expect an expletive to be in the title, but, alas, here we are… giving an album titled Holy Shit a five star review.

A mysterious man in a groovy pink suit handed me a set of keys for a stay at the Holy Shit Hotel. I opened the door and on the other side was the vast unknown. Zac Clark, raised in Vermont with a life sparked by nature and adventure, brought us his fourth studio record, Holy Shit, on September 24. Clark often sings of love and heartbreak accompanied by hopefulness and positivity. All of his lyricism comes from the heart, weaved together by the experiences he’s had while traveling the country in his tricked out van. For the past two years, this record was crafted primarily by Clark himself. He has referred to this record as his self-titled’s “pink psychedelic sister,” which was absolutely proper for this kaleidoscopic piano-rock masterpiece.

Zac Clark is an expert at creating captivating openers. The record begins with “Doin It,” and the intro structure feels reminiscent of “Dennis Rodman” from his self-titled, with significantly prominent and sensational guitar licks along with driving drums. The singer’s writing and composition on this record is melancholy and melodic, making sure the lyrics match the mood: “I’ve got a force that’s mostly habit / And if you want it / You can have it…Bring me all of your darkness / And all of your light / I don’t know what I’m doin’ / But I’ve been doin’ it all my life.” He sets the tone for the storytelling to come: it’s okay to be your authentic self, not knowing where you’re going is alright, and being unsure of the future because of the past is a detriment to your growth. “No matter how many days up until now I’ve wasted… I made it, and I’m celebrating!” The spoken word portions in this piece are both charming and enthralling.

“My My My” is a smashing single about intense infatuation. He sings, “If there’s a bender to be on then I end up bent…I’m fucked up on your mysterious intoxicant…just a taste of your skin and I get high.” The bass thumps among the equally deep piano chords. This tune is infectious, danceable, and delightfully alliterative. In a fan-declared favorite, “How Wild Are We,” Zac circles back to the relevance of time and space in this love song: “Finally, In spite of any past or future…I’m intertwining with a presence I can’t quite believe / You and I make lightning every time we meet.” The song fades out into glorious harmonies over acoustic guitar and keys.

Another standout single released in anticipation of the record, “Dynamite,” fits so well into the album through its lyrical content. “No past can hold me captive / Tonight I’m here with you / We ignite, we combine,” Clark says. I personally adored the continuous theme of not letting the past hold you back and Clark’s ability to write consecutive songs that run so cohesively is something that drew me into his music right away. “Holy Shit,” the title track and incredible ear-catcher with brilliant lyrics to go along with the snappy beat and melody, is sure to be the most noteworthy on the record. “Holy shit / I speak in tongues and I’m fluent in sacrilege…Gonna make love straight through the apocalypse / Well of course, I’m a force, you’re my source, you’re my equal and my opposite / Holy shit.” The merry-making, zestful, and sincere single could get anyone singing along. “Every mess is magnificent, yo.”

A just-audible recording of a peaceful wilderness is implemented on the ballad “Wide Open.” Crickets sing underneath a delicate tale, “Am I dreaming you, or are you dreaming me?…Let’s not think until all we really feel is gone / Every door is wide open / When we move then we move just right / Don’t know where I’m going / But my body just might,” again revisiting the idea of embracing unknown possibilities. Clark kicks things back into high gear for “What Better Time.” “No such thing as forever or for sure / If you’re still looking for a right time / what better time than the end of the world?” he asks, suggesting a sense of “now or never,” which spins this story from track to track. “I suggest that we surrender to the pressure / It eventually makes diamonds and pearls.”

“Allow me to invite you in from the nightmare to my dream,” he says, and there’s a knock at the door. “Infinitely,” follows suit as an upbeat, bluesy love song (featuring lyrics of existentialism triggered by the experience of the internet.) “So enraptured by memory and facts / We forgot how to feel or forget,” he sings of the pitfalls of social media. Zac keeps in touch with the people he cares about – his family, friends, bandmates and fans – by creating an intimate space via social media, while still recognizing the faults of modern technology in his music; these feelings are evidenced by his residence inside his traveling van. The idea of one door opening when another one closes continues to confirm the aura of positivity surrounding this record. “Fortunately every door also functions as key / I am opening you by virtue of you opening me / I pay no mind to just how limited our time might be / I love you, infinitely.”

There is a spacey intro to “Devotion,” a smooth and somber song on the record with delicate electric guitar solos, accompanied by a string section. He is philosophical in his pondering of the metaphysical. “Silence isn’t the lack of sound / It’s its origin,” Clark sings, continuing with, “and closing is implied whenever we open.” The increasingly dramatic piano and bass in “Almost” had me feeling Sara Bareilles vibes. In the style of the Broadway-known singer-songwriter, the indie pop Clark sings, “And when it starts / It starts everywhere at once…Never really learned it / But I’ve known how it goes / Since the beginning like a song in my bones…I want more than almost.”

Jazzy piano, supple synth, and dreamy strings star in the moving serenade that is “Lean In.” It is the song most certain to get a sea of lighters and cell phones up at his upcoming shows. This piece exudes heartbreak, yet invokes hopefulness. “Might not sound reassuring at first / This ain’t the worst that it’s gonna get,” he croons. All good things must come to an end, and the last track, “Outlaw Lovers” is everything that I want out of a love song. The record’s recounting of transformation from beginning to end feels like a victory of sorts. “We came here to dance / We can’t be made to march…I wanna turn you on / And tune everything else out.” I hear the sustain pedal let up, and this story concludes, for now.

This singer-songwriter goes above and beyond when it comes to storytelling in a melancholy yet beautiful manner. Zac Clark’s lyricism and composition compares to my most loved piano-rock gurus: Josh Ritter’s folksy narratives, Sara Barielles’ blues-style melodramatic piano, and his former bandmate and good friend, Andrew McMahon’s optimism and charm. His music has always struck me as heartbreak in the key of hopefulness. This record in particular is concentrated on the positive, even when it may feel like the negative is winning. This sunny, far-out psychedelic trip that Zac wrapped up in a bow of positivity and brightness is what the world needs right now.

ZAC CLARK’S NEW ALBUM, HOLY SHIT, IS OUT NOW WHEREVER YOU LISTEN TO MUSIC!