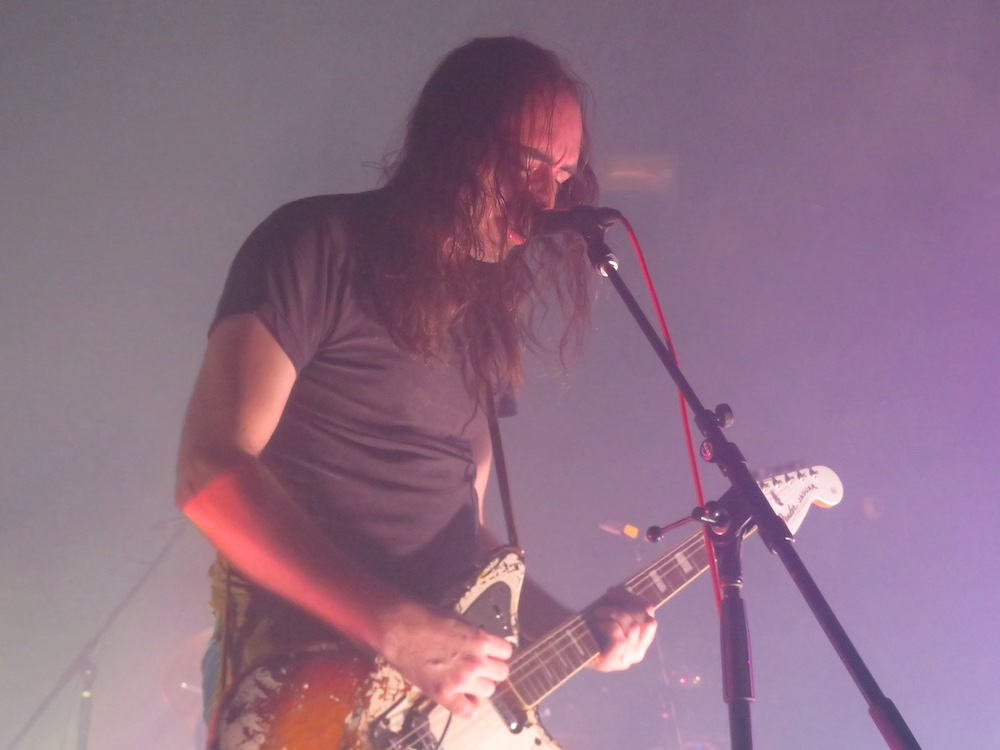 A Place to Bury Strangers at the Bowery Ballroom / September 15, 2021

Was this noise or was this music? The answer is yes. A Place to Bury Strangers at the Bowery Ballroom was both music and noise, and possibly performance art, as well.

A Place to Bury Strangers, commonly known by the initials APTBS, formed in 2002 in New York City. Vocalist/guitarist Oliver Ackermann has been leading the band since its early days, with bassist John Fedowitz recently returning after a five-year absence, and new drummer Sandra Fedowitz joining this year. APTBS has released five albums and 13 EPs. The band’s latest product is a five-song EP entitled Hologram, released on July 16.

At the Bowery Ballroom, the trio played loud and heavy music that was equal parts atmospheric, psychedelic, shoegaze, and space rock. Its thudding, droning wall-of-sound featured intense distortion at the forefront and speeding propulsion as its foundation. Aggressive in its minimalism, there was enough structure to describe the works as songs, but quite a lot of the music was improvised adrenalin-fueled chaos.

A few moments after appearing on stage in the midst of dense fog and flashing, colored lights, APTBS started pounding fast and chunky rhythms on their instruments. Within a few minutes, Ackermann started throwing his guitar into the air and letting it land on the hardwood floor to the sound of rhythmic feedback. Lifting the guitar high in the air, he then started using the guitar as if it was an axe against the floor. Many times throughout the concert, he would lay the guitar on the floor and drop a metal strobe-light encasement on the guitar.

About 40 minutes into the performance, John Fedowitz left his bass on stage and climbed into the audience. Drummer Sandra Fedowitz followed. Ackermann continued his noisy guitar solo. Was this the end of the concert? Not at all. The two Fedowitzes rolled a tall and narrow cart from the corner of the room, Ackermann descended from the stage and boarded the cart. Ackerman continued his guitar solo riding the cart as the drummer weaved the cart through the audience. The bassist followed, rubbing his strings against the corner of the cart to make further noise. This mobility seemed like a dangerous move since no path was cleared and the ongoing fog and flashing lights made visibility stubbornly challenging.

Back on stage, the band made more rhythmic noise for another 40 minutes, and Ackermann periodically made attempts to damage or destroy his guitar. He moved the amplifiers closer to the edge of the stage, seemingly threatening to drop them into the audience that was pressed against the stage. In the end, no one was injured and the instruments surprisingly survived their torture. The event qualified as a concert, but not in the traditional sense.