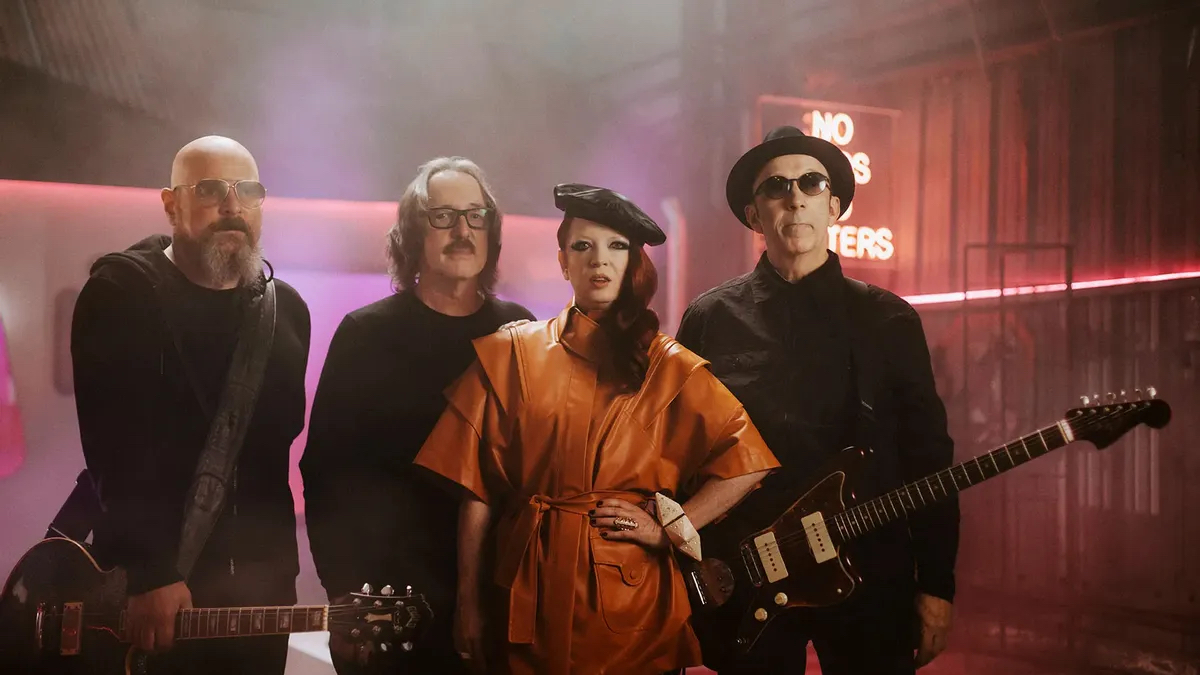 Some people have taken the past few months in stride, others a bit more laidback. Shirley Manson? The singer-songwriter, podcast host, actress, touring musician, and rebellious icon? 2021 was a launching pad for her, giving the performer even more of a platform to showcase her rockstar qualities, cultural awareness, and deep-rooted passion.

Garbage frontwoman Shirley Manson is exuberant as she calls from Salt Lake City, where the band is in the midst of an extensive U.S. tour to support their seventh studio album, No Gods No Masters (released in June). “The tour has been a dream,” she says. “We sat with nothing much to do for basically two years, and then to be unleashed, it’s a fantastic feeling. I expected it to feel more overwhelming, and it’s just felt really familiar.”

Manson has noticed one big difference since Garbage’s pre-pandemic shows, though: “The crowds are so enthusiastic, like they feel set to burst. I’ve really been struck by just how much a change seems to have occurred in the crowd itself. That’s kind of wondrous.”

This enthusiasm extends to tracks they’re playing from No Gods No Masters, which Manson says is a relief. “The new songs have gone down seamlessly, so that’s always really heartening because sometimes when you play new material, you start to see a slightly frosty reception at first, but not so with new tunes,” she admits.

Manson and her bandmates wrote the songs during a two-week span while they were staying in Palm Springs, California, then recorded the album when they returned to their home base of Los Angeles. This all happened as the COVID-19 pandemic unfolded, so “One could argue it was a dreadful time to make an album,” Manson says, “but you do what you do when you have the urge to do it. Once you start along a certain musical path, it’s impossible to stop. It’s like a runaway train. The ideas are coming, the songs are coming together – this is it, this is the trajectory of this record, for better or for worse.”

Still, after fronting Garbage for three decades, Manson says that creating No Gods No Masters was a bit challenging for her, creatively speaking. “As an older artist who’s been around for a long time, I think it’s important to push yourself and dig deeper. I don’t think you can get away with what you once could when you were young. I understand that I have to ask more of myself [now].”

On the other hand, Manson adds, her long experience also made the writing process go smoothly because she is so sure of what she wants to express: “In terms of what the lyrics were saying, it was just a reflection of basically what I was saying in my private life between friends and family. I opened the floodgate and out came my feelings about what was happening in the world at this very moment. I feel very relieved that I got that off my chest because it stands as a public testimony to how I view things currently.”

In truth, though, Manson has been outspoken right from the start of her music career. As a result, she’s often cited as a strong female role model. It’s a position she seems to navigate with care. “I understand that we’ve had a long career and we’ve probably touched a lot of people – I’d be really disingenuous to say otherwise – but I don’t really think of myself as a role model, per se,” Manson explains, “but I do understand that just by the very nature of negotiating the terrain of the industry, that wants to basically dismiss anyone over the age of thirty, I realize that very act of defiance is inspiring to a lot of young women, in particular. I think people enjoy watching someone rebel against definitions that are projected upon us from birth.”

Manson began her music career when she was growing up in Edinburgh, Scotland, joining her first band, Goodbye Mr Mackenzie, when she was only fifteen years old. She was a keyboard player and backing vocalist, but through a decade in which the band put out several well-received releases, it become clear that her talent demanded a more prominent role, so she and two of her bandmates formed a new group, Angelfish, where she was the lead singer. Angelfish released their self-titled debut album in 1994, but even at that point, Manson admits, “I still wasn’t very creative – I wasn’t writing.”

Then something life-changing happened for Manson: after seeing an Angelfish video on MTV, drummer Butch Vig invited her to join Garbage, the band he was forming with guitarist/bassist Duke Erikson and guitarist Steve Marker. Vig, also a producer, was already known as one of the most important figures in alternative rock thanks to his work overseeing such legendary breakthrough albums as Nirvana’s Nevermind and Smashing Pumpkins’ Gish. It was an opportunity that Manson couldn’t pass up – even though she wasn’t entirely sure she’d be able to pull it off.

“I got the job with Garbage with the understanding that I would contribute at least a quarter of the work, and I just bullshitted my way into the job by saying, ‘No problem, I write music! No problem at all!’” Manson says with a laugh. “The making of the first record [1995’s Garbage], they were looking to me for ideas, melodies, words – and I had to come up with something. I had no choice because I’d already basically told a white lie. So I was a little on the spot.”

Fortunately, Manson’s strong alto vocals and candid lyrics went over well and that album went on to become one of the most popular alternative rock releases of the mid-nineties, charting in more than a dozen countries. Now, with No Gods No Masters, the band have released seven critically acclaimed and commercially successful albums, continuing their run as one of the most popular alternative rock bands of the past thirty years.

Manson still writes all the lyrics and vocal melodies for the band, following the same approach she used with that very first Garbage album. “I’m a very forthright, honest person. You pretty much see what you get,” she states. “I’m not trying to cast a spell. I’m not trying to play a role. I’m not trying to be someone I’m not. And I think when you’re your absolute authentic self, that resonates with people. So I think as a band we did forge a very authentic connection with our fans right at the very beginning, and then we really built a very solid foundation on which we have been able to thrive independently of public taste, and that has played very much in our favor.”

With her role in Garbage so well-established, Manson has expanded her creativity into other areas. As an actress, she has had notable roles in television (Terminator: The Sarah Connor Chronicles from 2008-2009, and Top Wing from 2017-2018) and in film (2012’s Knife Fight).

Since 2019, Manson’s big focus outside of Garbage has been her job hosting The Jump, a podcast in which she interviews a wide variety of fellow musicians about the songs that changed their careers. It has given her the chance to talk with Patti Smith, David Byrne, Liz Phair, George Clinton, and Big Boi, among many others. “Everything they say resonates in some way or form,” she expresses. “I come out of each interview and I feel like my veins are on fire every single time. And with each and every one of them, I’m a wee bit lovesick by the time I say goodbye, and I’m sort of sad that I won’t get to hang out with them [more]. It’s a weird, verging on creepy sort of reaction that I experience!” Now in its third season, The Jump is available via Apple Podcasts.

As for how Manson summons up the work ethic and energy to do everything, she says, “I think being Scottish helps because I have a very forceful nature. It’s like a cliché, but clichés exist because they’re true. [I’m] very, very fiery. I’m a redhead, and redheads are just built slightly different, I think. I’m really passionate, and that passion has served me really well.”

Manson has no plans to stop anytime soon, either: “I’m very proud that I’m still here. I can’t quite believe it. I mean, I keep pinching myself. I’m amazed I keep getting to make records. I realize the fact that we’re out on this really big, successful tour is extraordinary. And I’m just bloody grateful!”

FOR DETAILS ON GARBAGE’S TOUR AND THEIR LATEST ALBUM, VISIT THE BAND’S WEBSITE! CLICK HERE TO LISTEN TO SHIRLEY MANSON’S PODCAST, THE JUMP!