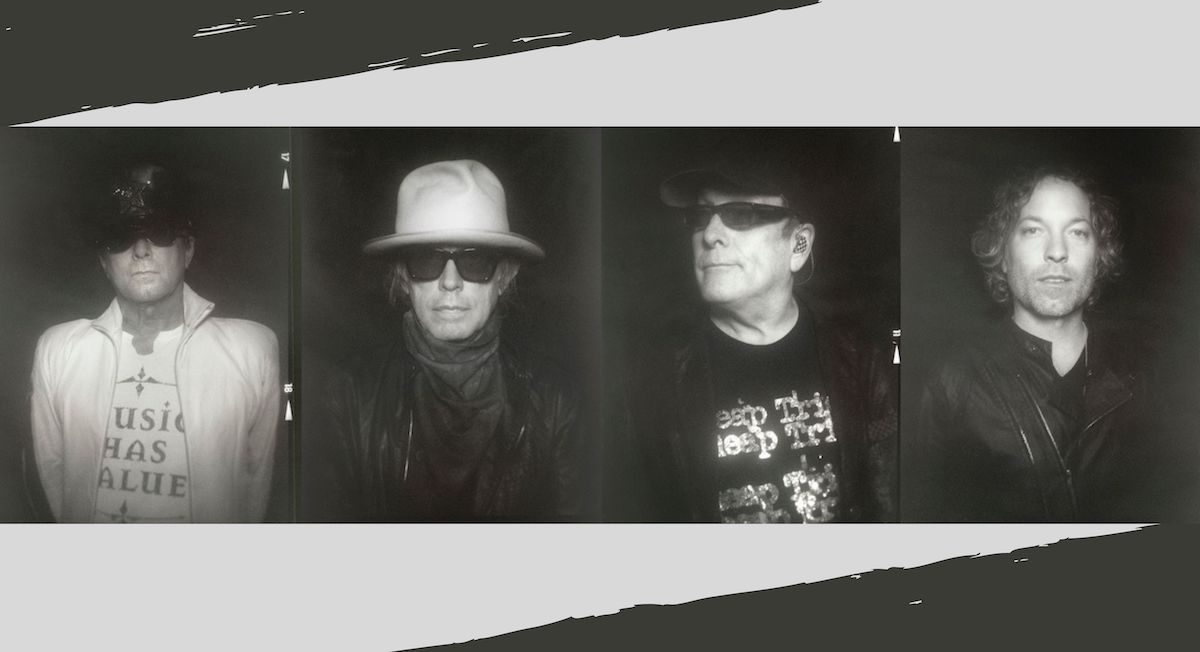 With more than a handful of dates in the tri-state (including a stop in Montclair, New Jersey right down the road from where Rick Nielsen lived at one point), we can’t help but revisit our love for the geniuses behind hits like “I Want You To Want Me” and “Just Got Back.”

Cheap Trick is a band that we have covered for a long time… and by a long time we mean years… and by years we mean decades. The legacy rockers can’t help but maintain their standing as one of the greatest live bands of all time. It’s not only what they do best, but it is who they are – possibly more so now than ever before. (“I’d quote that we’re too dumb to quit, but we just love what we’re doing,” Rick Nielsen admitted to us with a smile evident in his voice.)

What fans everywhere need to realize is that Cheap Trick is a family affair; their not-quite-shared DNA is laced throughout the music they make. As a world-renowned musician and the lead guitarist for the band, Nielsen describes his practically lifelong bandmates, vocalist Robin Zander and bassist Tom Petersson, as brothers. For an only child like himself (something we bonded over during our lively phone conversation), those two found that sibling-sized hole and made themselves comfortable in it – almost 50 years (!) of being a band level comfortable. Nielsen, who is a father, charitable artist, memorabilia collector, and humble human being as much as he is a member of Cheap Trick, found his forever friends in this band.

However, the comfort and connection between one another doesn’t stop with those three. Currently on the In Another World Tour alongside Nielsen and Zander are Daxx Nielsen (Rick’s son) and Robin Taylor Zander (not to be confused with the aforementioned Zander, who is RTZ’s father). While our kindhearted friend Tom Petersson recovers from heart surgery at home with his adorable family, the second set of father-son musicians are taking the stage.

Rick and Daxx have played together in Cheap Trick since 2010, spending the last decade behind the drum kit where former member Bun E. Carlos sat for the previous 30-something years. Now Robin and his son are working full-time onstage together after a handful of Cheap Trick stints here and there starting in 2014. The close knit fashion of this band has been taken to new heights as of late, which, in turn, has given the world even more of a reason to follow along with their ever-evolving journey. Great music, an even better stage presence, various eras of hit songs, a fandom akin to a cult following, and a distinctive visual aesthetic only scratch the surface of Cheap Trick. Family ties is just another notch in their celebrated belt.

Coincidentally, the hard rock meets power pop frontrunners released their 21st studio album, In Another World, in 2021. The record hit multiple charts, including No. 2 on Billboard’s Top Tastemaker Albums and No. 7 on Top Album Sales charts. It shined online and off, stunning fans of all ages with its electric rock mystic and always goosebump-raising melodies. It brought on one more sold-out tour, a slew of exhilarating dates, and even more songs to pick from.

From In Color to In Another World, it is clear that Cheap Trick, in all its familial rock and roll glory, will never stop impacting the music culture that they helped shape from day one.

I definitely need to start by asking about how it feels to be back on stage with a new album out during these weird times, so how has it been?

It’s extra weird! So many things changed during this period of time, and are still changing, so it’s pretty cool that every show we’ve done so far (and we’ve done quite a few actually) has been a full house or sold out. I think people are wanting to get back to music again, so getting out in any shape or form – like coming to a show of ours – could be the way to go.

Oh, I think that that’s very true. Just being around music, art, and people is truly becoming an escape from whatever is still going on.

Right? The shows look amazing, though, and it seems that you are all having lot of fun, regardless of all the restrictions and worries that might be floating around.

Like I just said, it’s kind of weird because we’re not allowed to have a meet and greets and all that stuff. It’s still a bit odd not to see everyone like that, but it’s been a good. I think the fans and the people that come to our shows understand that, understand why things are operating as they are. This is just a new way of dancing for the time being.

It’s something to deal with for certain, but worth it because you have so many new songs to play live, which must feel so nice regardless of how big your catalog is. How how has the response been to the songs off In Another World now that you can throw them out to the fans in a live setting?

Pretty, pretty cool. A few Mondays ago “Light Up The Fire” was played on a Monday Night Football on ESPN. That was cool! The fact that they played a new song when it’s usually only older songs? The coolest, even though we like that too. Hearing a new song played was terrific and then the night before I think they played “I Want You To Want Me” during the Tampa Bay game. Football went from playing one of the first songs to one of the most recent in two days, which was so cool, especially for a big sporting event.

That’s awesome. The parallels of the two tracks having their football moments really showcases the history you guys have.

Yup, it’s pretty cool, too bad. I wasn’t watching either game, though.

Maybe next time, right? You bring up a great point, though, Rick, about how even the oldest of your songs are still so profound. So many Cheap Trick tracks are heard on the radio, heard in media, and just everywhere. How do you feel about that? To know that your music has lived on, been passed down, and continues to be shared? Does it impact what you guys are doing now in any sort of way, or you’re just still doing it because you love it?

Definitely the latter – we do it because we love it. When we do shows, we don’t do the same show every night. We throw a new song in or change the order of things or get people involved onstage or in the crowd. It keeps it a bit fresh as opposed to going through the motions. I always think that I treat every audience like we’re auditioning for them and we better be good.

This time around is extra fresh and extra special, actually, because it’s kind of a family affair at the moment. Your talented son Daxx has been in the band for a while now, but now Robin’s son is in on the action. What has it been like to have this very evident family dynamic kind of taking over the stage?

Pretty darn cool! Everybody is out there playing good. Every show rocks out. Daxx was never brought into the band just because he was my son, though. I let the other guys make that decision. It was the same way for RTZ, Robin’s son. They earned this.

Another generation of musical brotherhood! I’m an only child so that warms my heart.

It’s a good thing, but it’s also a bad thing. You miss that comradery, but I can imagine that at this point, especially having such an extensive career with the Cheap Trick guys, is like being siblings with that level of closeness. Do you find that?

Oh, boy. Yeah, I still find that. We don’t know what it’s like having a brother and sister and I imagined it had to be interesting growing up like that, but at the same time, I was happy. Not to many a PG-13 or a poltically incorrect statement, because I don’t mean it like that, but in actuality, I don’t mind playing with myself.

I get that wholeheartedly. I can imagine that a band is the closest one could get to mimics that sibling energy.

I’ll agree with you there! Music brings people together and these guys are my brothers and sons.

Music has that power – you’re right. Speaking of it’s power, but specifically Cheap Trick’s power, it’s been five years since your band was inducted into the Rock & Roll Hall of Fame. With that title and prestige in your back pocket, has anything changed? Does that come with any sort of pressure that you have to live up to anything?

Oh, let’s see. I get treated better at the grocery store. [Laughs] You know, it’s good on a resume or a bio or whatever and it lends a bit of credibility, for sure. Behind-the-scenes people know what you can do with that because that’s gives someone a higher plateau than just being in a band or having a record out. Just one hit album or a moment fame isn’t going to get you into that or keep you there. Its because of the longevity, what you have to be around for and for how long, too. In fact, we were eligible to be in about 11 or 12 or 15 years before we got in. Who thought we would ever get in at that point? It was unexpected by then, but it’s quite the honor. We’re still us, though, and I’m looking forward to playing all these shows now no differently. We’ve got one coming up in Reading, [Pennsylvania]. I played there with my second band TNT, so its just as cool for Cheap Trick. Our legacy lives on whether anybody else cares about it or not. It’s pretty cool music and people still hear it everywhere. That’s just it.

Cheap Trick is a global, cultural entity in its own right. The songs are universal.

For sure, yeah. Then Montclair… Wow, I recalled Montclair was where I was when we made our first album. I stayed with Jack Douglas at his house in Montclair and it was right down the street from Yogi Berra, the baseball guy. Then we’ve got Huntington [New York] and Bensalem [Pennsylvania] and in Port Chester [New York.] I still know something about all these places from all my years, so I’m looking the most forward to those.

Wow. What a small world, even for a worldly person! On that note, actually, in the span of a month you played a surprise backyard gig in Ravenswood, Illinois and the iHeartRadio Music Festival in Las Vegas. How do you go from an event of that caliber to one so different? Are they even comparable?

They’re all comparable, Debra. In the larger places, in a way you’re playing to the person in the front row, because it’s sometimes all you can see. Then for the smaller places, the front row is right there, so you’re still playing to them. It’s the fact that I like to play wherever I go and with whoever I’m with that matters. I make mistakes at the big shows and I make mistakes at the small ones, so you’re treated to that either way.

FOR TICKETS TO SEE CHEAP TRICK ON THEIR IN ANOTHER WORLD TOUR, CLICK HERE! THE BAND IS COMING TO THE PARAMOUNT ON NOVEMBER 4, THE CAPITOL THEATRE ON NOVEMBER 7, AND THE WELLMONT THEATER ON NOVEMBER 12!