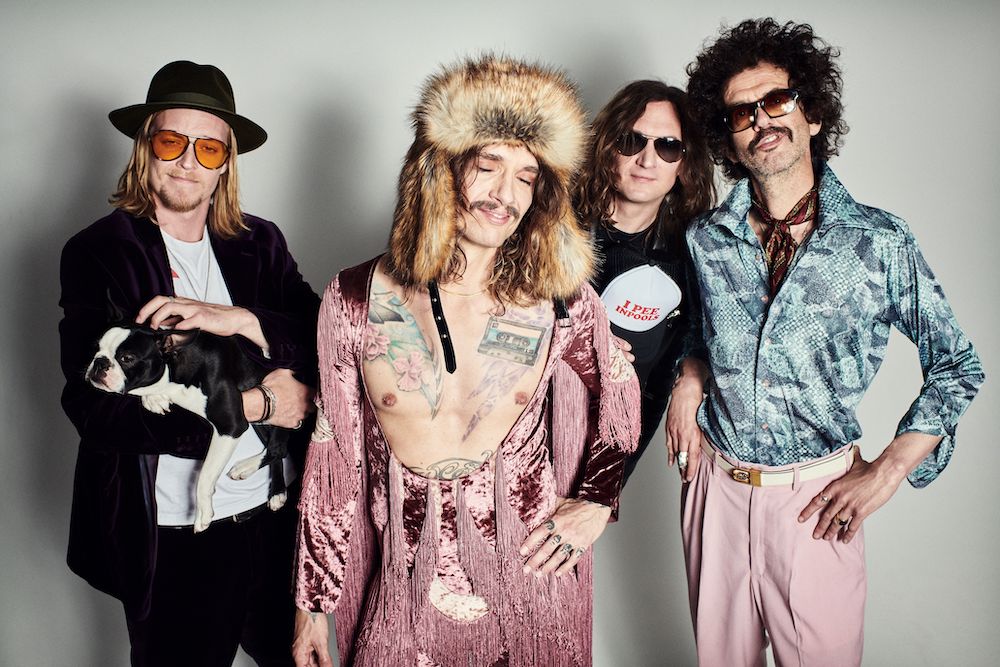 The Darkness – Hard Rock’s Most Misunderstood Band Open Their ‘Motorheart’

Childhood bonding over Queen’s Jazz and understanding the benefit of being humorous has led The Darkness to an understated sort of rock and roll stardom. Their brand new album, Motorheart, out on Friday, depicts that once again.

Whenever music journalists, critics, or fans discuss The Darkness, one question is inevitably raised, “Why are they not more popular?” They have all the ingredients of a top-flight arena rock act: hit-worthy songs, classic albums, a charismatic frontman and a hard rock sound that recalls Queen and other legendary seventies bands.

Perhaps frontman Justin Hawkins’ Barry Gibbs-like falsetto is too much for some listeners. Perhaps it’s because the band were truly shooting stars during the early part of the millennium. Formed in Lowsloft, England in 2000, they made a splash across the globe with their 2003 debut Permission to Land, which spawned a handful of hits, including “I Believe in a Thing Called Love.” Soon into their meteoric rise, however, the band started to fly apart like a hurtling jalopy. First bassist Frankie Poullain acrimoniously split with his bandmates. Then, after The Darkness’s criminally neglected second effort, One Way Ticket to Hell and Back, frontman Justin Hawkins departed, summarily ending the band in 2006 and turning them into millennial footnotes. Solo albums and new bands such as Stone Gods and Hot Legs followed. Then, in 2011, reunion shows featuring Justin Hawkins, Frankie Poullain, and guitarist Dan Hawkins were announced. Since then, not only have the band continually toured the globe, but they have also released continually fantastic hard rock records, any of which would have been massive hits during the seventies, but have not had that impact following the death of our beloved record industry. Whatever the reason, people are missing out on a historic run of great records that continues with the amazing Motorheart, another eventual classic, with songs that should be chart toppers and radio staples. Who knows, perhaps Motorheart’s catchiest song, “Sticky Situations,” will break through.

Founding guitarist, composer and producer Dan Hawkins recently conversed with The Aquarian about The Darkness’s past, present, and future.

Fans were excited to see The Darkness return to the US in 2020, then the pandemic struck. Just how were the band affected by COVID-19?

Obviously the US tour was sacked off, which was a massive pain in the butt. Thankfully, we had managed to do the rest of the world tour. At the time of the cancellation we thought, “Ah, we be back there in six-month’s time,” so we were not that bothered. Reality dawned after about a year. We realized that this thing is not going away.

Touring came to a full-stop, ground to a halt, but we were also scheduled to make another album. Luckily, I have a proper recording studio at my house, which is where [we created] the last couple of albums. It was a case of getting all of the jobs I needed to get done at my house, recording the album and spending a little more time on it.

The extra time benefited the band?

I think so. We were lucky in the way we were set up. There were very tight restrictions in what we could and could not do, but in my home studio, I have a drum isolation booth with its own entrance. Basically, Rufus [Tiger Taylor [drummer] would turn up, get in there, I would be in the other room, and never the twang would meet. We kind of did it like that. It was a bit different really, because normally we’d all be together when writing, whereas on this one, Rufus and I would come up with the backing tracks before sending [the recordings] over to Switzerland where Justin would vocalize them. It was a bit of a convoluted process, but I do enjoy a challenge.

As Motorheart’s producer, what else did you bring to the recording? Were you also responsible each song’s arrangement?

Yes. Although we are all pretty good arrangers, everyone is trying to find the best route from A to B. Not to blow my own trumpet, but the arrangements tend not to change from when I begin mapping out the songs. Especially, when we begin with backing tracks. They need to make sense, be dynamic and the tempo must inform Justin what he needs to do. If it was just one massive verse followed by one massive chorus and just repeated –just 10 minutes of music – it wouldn’t make sense. Arranging is certainly the first port of call.

The Darkness’s songs have always been beautifully arranged, but the music has been taken to an even more lavish level on Motorheart.

A lot of bands have a tendency of throwing in loads and loads of guitars and filling every available space in a song. The real challenge as a producer is to not let myself do that.

It is the same with drummers entering a recording studio for the first time. It is only then that most realize they don’t have to play along with every note of music.

Absolutely. It is harder not to fill a space.

Is the title track “Motorheart” actually about a sex robot?

Yes. I believe that is Justin’s take on how to deal with COVID, though I hope not. [Laughs] But I don’t know how he has been dealing with things over there in Switzerland. Who knows what goes on behind closed doors? To be fair, he thought the song’s main riff sounded robotic. It does sound quite mechanical. The lyrics were also inspired by what he was feeling at the time, which was about fucking a robot. [Laughs]

I love the band’s sense of humor, especially on recent hits like “Rock ‘N’ Roll Deserves to Die” and “Solid Gold.”

Humor is important to the band. It is also our Achilles heel. We cannot help ourselves sometimes. As with “Solid Gold,” we had the backing track and the riff sounded great. Justin was struggling to come up with something [lyrically]. As the record’s producer, I told Justin and Rufus, “I’m going down to the pub. Come up with something, anything. I don’t care. It could be complete rubbish. Just come up with something. Have a laugh of it and I will see you in a few hours.” When I came back, they were really excited. They played back the demo and the words were good, but when the song goes to the chorus and they started singing “shitting out solid gold,” I thought to myself, “Oh, no. It was supposed to be a single!”

It was both a hit single and hit music video.

And I thought, “Who is going to play that?!”

Is that Achilles heel the reason The Darkness are not as popular in the United States as the band should be?

Possibly. I was watching the 2019 Download Festival in England and there was not a hint of humor in any of the bands that performed on any of the bills. It dawned on me that if left my devices, that [hint] of humor might not be there, but I’m glad it is. I am not saying, “I have no sense of humor,” but I take music seriously. My brother does not.

When speaking with other members of the music media, someone will always ask, “Why isn’t The Darkness bigger in the States?” “Why are they performing in small theaters when they should be selling out arenas?” Maybe the band’s brief split halted the momentum?

If only I knew? I think one of the reasons is that when the band took off in such a big way, we almost crossed into having a pop audience. The thing about pop audiences is that they are by their very nature transient. They are there one minute and gone the next, and because we entered that pop arena, we turned off a lot of classic rock heads who probably didn’t think we were cool enough to support for the rest of their lives. We went through this pop phenomena while being a hard rock band and came out with a pretty big and loyal fan base, but also with a sense of having to prove ourselves for the rest of our lives.

I always thought The Darkness made their “We’re a hard rock band” stand on their second album One Way Ticket to Hell and Back. It’s frustrating. “Sticky Situations” should be a major hit.

When we’re making these records, we don’t try to service our perceived audience. I’m not interested in that – never have been. It’s about the band sounding ambitious, ‘cause A) we are, and B) it is the sound that suits us best. That’s also because of the bands that have influenced us were major arena acts. I guess we’re bringing the arena back to the pub at the moment. [Laughs]

There is a hint of Queen in your sound. Are they one of the big influences?

Definitely. Queen played a major role in the reason why my brother and I started this band in the first place. We made a pact that if it didn’t work out, we would not break up, we would not stop, and we would only play music that we loved. If worse came to worse, we would be the best Queen cover band in East Anglia, England.

Queen’s A Night at the Opera made me want to be a musician. Queen’s Jazz was the album my brother and I connected on. We had very different influences while growing up, then we both listened to that album and it is the one that we both absolutely love… and Rufus Tiger Taylor is [Queen drummer] Roger Taylor’s son, so there is that connection.

The Darkness had an issue holding on to drummers. Things stabilized once Rufus joined.

We haven’t had one explode in a while. [Laughs] I don’t want to jinx it, but Rufus is due to explode any day now.

Spinal Tap is a documentary as far as I am concerned. [Laughs]

The album’s closing track, “Speed of the Nite Time” has a decidedly eighties vibe.

That was Frankie’s baby. We built that song up from a bassline. It has a Pat Benatar, The Cult, The Cure, and Billy Idol vibe.

Since The Darkness regrouped a decade ago, what has been key to band’s sustainability? What is different about the band now as opposed to the early version?

After we split up, it took a few years for us to recover from the hedonistic place we had all traveled; basically we had to pull our heads out of our asses and clean ourselves up physically. At the point when the band formed again, it was for nothing more than a love of what we had created and what we had achieved together. It is almost like a first love. We were never going to be able to leave it alone. Although we are in business together, the most important thing is everyone is happy in this band, which is good and bad. We tend to be conflict shy – and I think what conflict tends to make for is better music sometimes.

On the whole, the main thing is everyone is happy being in this band. If you are not, what is the fucking point? When it goes sour and people don’t like each other, but are forced to work with each other, it is a nightmare. It doesn’t matter if you have the best job in the world. Maturity is also [important]. Having lost what we had and having a chance to have it back…we are not going to let it go again.