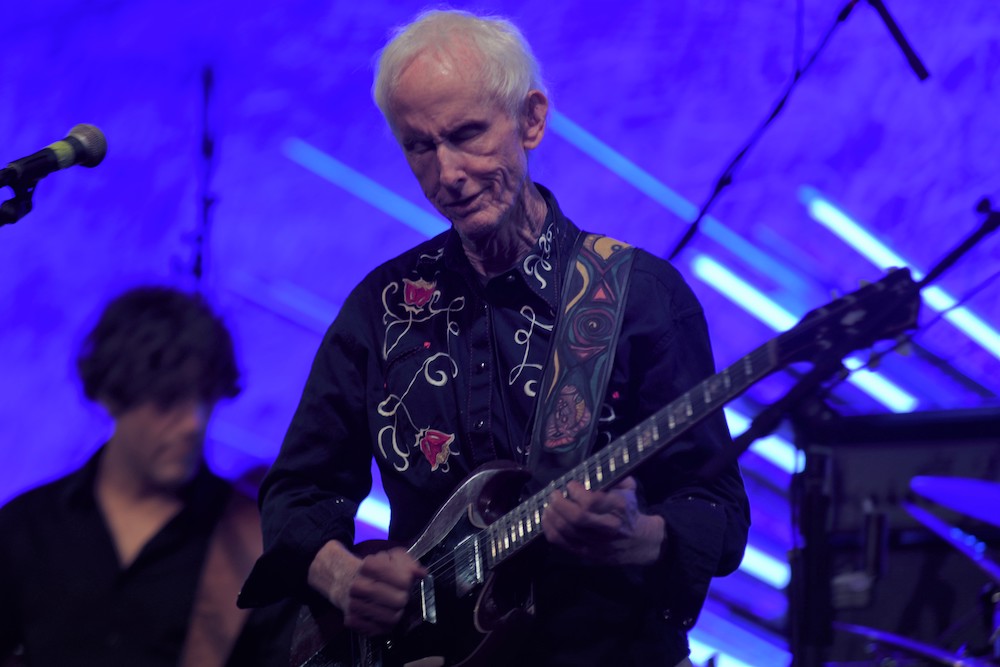 Robby Krieger dedicated his show at NYC’s Sony Hall to sports artist Scotty Medlock who left us last week; then he launched into the opening riffs of “Break on Through (To the Other Side).” A feast of friends to one of the most notorious and influential bands of the sixties, guitarist Krieger weaved his musical chops around drummer Ty Dennis’ boozy beats of bossa nova, jazz, and rock into a cosmic swirl of psychedelic rock and roll.

Krieger’s recently released autobiography, Set the Night on Fire, fills in the gaps of his former bandmate’s books. Adding insight onto The Doors’ history and separating fact from fiction, he takes on Ray Manzarek and John Densmore’s posturing and sets the record straight surrounding the band and its late singer, Jim Morrison.

At Sony Hall he went from the slinky glisten of “Moonlight Drive” (the first song he ever played with the Doors) to the screeching apocalyptical thunder of “When the Music’s Over” on his Gibson SG, coloring Morrison’s lyrics with tones pulled out of a musical palette based on the blues – as well as some flamenco guitar. Playing fingerstyle with some light strumming and a minimalist pedal board of effects, 75-year-old Krieger let his rowdy, fuzzy overtones ring out as the keyboards and bass built on the low end and rounded out the mix.

Using his fingertips again and a pick on a few numbers, he gently interwove sounds before blasting through the rock steady boom of bassist Dan Rothchild (son of Doors producer Paul Rothchild) and Ty Dennis’ backbeats. Countering keyboardist Steve Molitz’s trippy dirges on Hammond organ (that Robby Krieger traded solos off throughout the night), they faithfully added some spicy improv to a cannon of Doors hits along the way.

Ty Dennis was an essential part of the controversial Doors of the 21st Century reunion shows with Ray Manzarek back in 2003, of which original Doors drummer John Densmore declined to play on. Lawsuits followed regarding the band’s name and feelings were hurt, but the show went on as Cult singer Ian Astbury stepped up to the mic. Police drummer Stewart Copeland signed onto the tour, too, but was dethroned (then sued the band) from the drum chair by Dennis who was an integral part of Robby Krieger’s touring outfit at the time. They played along with his son, Waylon Krieger.

Waylon Krieger shared the singing with bassist Rothchild and the night went down like a family affair with guitar tech Forrest Penner (from the first Doors tribute band Wild Child – per Robby) joining in on a few numbers, as well as drum tech Owen on egg shaker and tour manager Marco orchestrating the crew from the sidelines for the grand finale on “L.A. Woman.”  The collective vibe up there was infectious as the band breathed life into the Doors’ greatest hits as well as some deep cuts that expertly commemorated the 50th anniversary of their swan-song record, L.A. Woman.

After the bossa beats of the opener, things got funky on “Peace Frog.” Never ones to take it easy, the Doors were influenced by the blues but never played it safe. Theirs was a holy trinity and a union of sorts, a melting of Krieger’s bluesy guitar runs, Ray Manzarek’s dark and moody undertones, and Densmore’s jazzy, funkified rattle. Poet Jim Morrison was the lead singer and lightning rod to the band’s intoxicating rock.

Morrison’s spirit was alive and kicking on the demonic guitar runs of “L’America” that Rothchild countered with the strut and stammer of a tripster making his way south of the border. “The Changeling”, also from L.A. Woman, was a bluesy and driving rocker with Rothchild singing, “I’ve never been so broke that I couldn’t leave town.” This, of which, Krieger followed with some screaming ‘Wah’ as the tune modulated up a tone.

On the tasty “Soul Kitchen,” written as a tribute to the restaurant Olivia’s in Venice Beach where the boys used to hang, Waylon belted out, “I’d really like to stay here all night,” as the band roared on through the coda.

The drummer banged out the snare shot heard around the world jumpstarting the set closer, “Light My Fire,” that was followed by Manzarek’s signature lick and Krieger’s blastoff to the psychedelic Gods of thunder. Taking on an original solo, he borrowed a few notes from The Beatles’ “Eleanor Rigby,” John Coltrane’s “My Favorite Things,” and on back to the pyre, continued setting the night on fire indeed.

“L.A. Woman” ended up as the night closer when the road crew took to the stage as mentioned earlier, which had the crowd on its feet toasting a return of live music to Times Square in an (almost) post-COVID era. With Robby Krieger and his band at the helm this time around, the redemptive power of “When the Music’s Over” might just prevail as the song goes… until the end.

[Author’s Note: Special shout out and thanks to Ida “L.A. Woman Confidential” Miller and Robby Krieger Band Tour Manager, Marco Moir, for helping out with this one.]