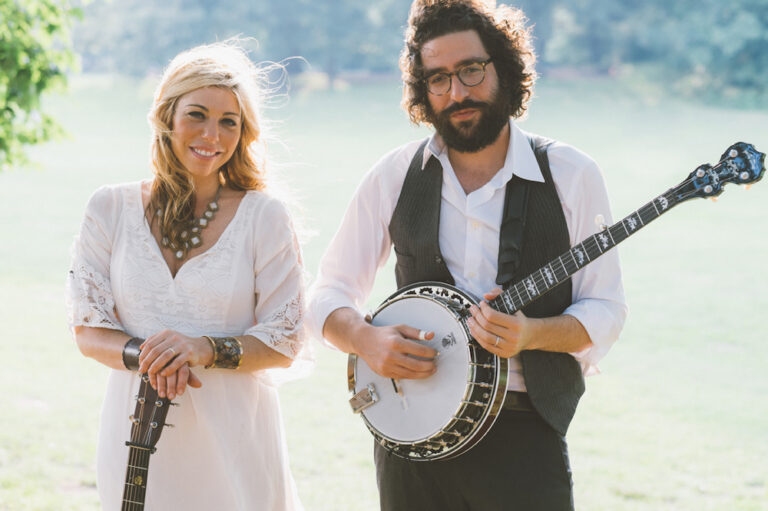 When the annual Makin Waves Awards are doled out around Christmas, the independent Montclair-based Jewish bluegrass ensemble Nefesh Mountain will be named the 2021 Band of the Year in honor of a torrent of accolades and accomplishments in the face of adversity. In a blend of old-time Judaic and Appalachian music with new originals that blend both styles, culture, and heritage are woven into a beautiful, mesmerizing tapestry. The seamlessly remarkable and intoxicatingly joyous results of four acclaimed albums and several international tours make the most wayfaring stranger an instant fan.

Since their 2015 banding together as Nefesh Mountain, husband-and-wife team Doni Zasloff, vocals/guitar, and Eric Lindberg, vocals, guitar, banjo, mandolin, and dobro, have been blending and bending Americana, Eastern European, Appalachian, Israeli, and Celtic music. They are joined by Alan Grubner, fiddle; David Goldenberg, mandolin, and Sam Weber, bass. They recently followed their award-winning 2021 studio LP, Songs for the Sparrows, with the live Hanukkah album, Live from Levon Helm Studios: A Holiday Hanukkah Holiday Concert, and a coinciding tour that includes remaining stops in the Midwest and South through December 15.

Despite the pandemic and without a major label, Nefesh Mountain have been featured in Rolling Stone, jammed with esteemed violinist Mark O’Connor and Phish’s Mike Gordon, recorded with bluegrass greats Jerry Douglass and Sam Bush, topped the bluegrass charts, garnered Grammy interest, toured the nation, and then toured some more. But the greatest accomplishment for Doni & Eric was the birth in June of Willow, their first child together, growing their family that includes Doni’s teenage daughter and son.

I chatted with the creative couple about their band’s success, sound, and summit and congratulate them on their joyful journey along the way!

When and how did the two of you meet and start playing music together? Were you a couple before forming the band or after?

We both met in 2010 and began working together in different bands, most notably a Children’s Music band that Doni led called the Mama Doni Band. We were co-workers for a number of years and, luckily for us, inevitably life brought us even closer together and we fell in love. Nefesh Mountain is a product of your very close and unique relationship, not just with each other but also with our shared and mutual love for bluegrass and Americana music and Jewish culture and tradition.

Where are you each originally from, and what do you like most about Montclair that made you want to be based there?

We’re both originally from New York City. Eric was born and raised in Brooklyn and Doni the same, although her family moved around a bit more, eventually taking her to the DC area and then Philadelphia. We both gravitated to Montclair as musicians in and around the greater NYC area. It’s really an amazing town with so much going on, and with the amount that we travel, we really need to be close to all the major airports around New York.

Is there an actual Nefesh Mountain and where, or is it a fictional reference to a soul mountain that symbolizes the Appalachian & Judaic heritage of the band?

For us ‘Nefesh Mountain’ is a very real place, but alas, there is not a physical place in this world called Nefesh Mountain… at least not yet. For us, it’s a magical world that we’ve created for ourselves, sort of out of necessity, a place where bluegrass/Americana music can coexist with our Jewish identities. The world of American roots music has long been tied to and at times almost synonymous with gospel music and Christianity. Some of our favorite bluegrass and country songs, such as “I’ll Fly Away,” “Will The Circle Be Unbroken,” or “Down in The River to Pray,” to name a few, are all gospel spirituals, but for us as Jewish Americans, we felt that we needed to create a space for us to include not only our own spirituality but also our culture and traditions, as well… and that is Nefesh Mountain.

What impact do you hope Nefesh Mountain has on culture and society and why?

Our main goal is to create beautiful music that represents who we are as songwriters, husband and wife, and as bluegrass musicians. Beyond that, we also really do sincerely hope to make a difference on culture and society through our music. We live in a world with all too much judgement, criticism, and hate, which in my lifetime used to be hidden under the surface but it’s at a point now where we just can’t ignore it anymore. Our music gives us a chance to talk openly about inclusively, tolerance, and love, and we hope that little by little, it can make a difference.

Eric, is banjo, guitar, or both equally your main instrument? Why?

They are both my main instruments in the band. I play a few others, as well, but these are the ones that I’ve really committed to, and I just love having the chance to play them both on stage and on our records. I’d say that all in all, I’m maybe a bit more of a guitar player – but, for me, I see them both really differently, and in that respect, can offer very different things musically, which is really inspiring!

When and how did you get together with your band mates and what do you like most about playing with them?

We feel really lucky to be touring with such great friends and musicians. We’re all based around the New York area and these guys add so much to the band and our music. Alan Grubner on fiddle, David Goldenberg on mandolin, and Sam Weber on bass.

How have you gotten to know Sam Bush and Jerry Douglas and did either of you play with them before Nefesh Mountain?

We’d met Sam and Jerry over the years before Nefesh Mountain in different places and capacities, but it’s through our music that we’ve really formed the musical relationship and overall friendship that we have today, and we’re just so grateful for it! They’ve been heroes of ours for years and year, and every time we get to hang with them is just amazing.

Describe what your operation and team are like, how as an independent band you have been able to accomplish so much, such as top music charts, features in Rolling Stone, collaborations with Jerry Douglas, Sam Bush, Mark O’Connor, and Phish’s Mike Gordon, international tours, and prestigious music festivals?

It’s hard to say actually. We have a great team, and Doni and I both are extreme workaholics. Overall, we’re always really focused on what’s coming next for us around the bend… sometimes looking even a few years out. We’re so, so grateful for the success that we’ve had, the collaborations, with all these great musicians and everything. I think ultimately, it’s all a combo of our love for this music and each other, all the work along the way, and certainly some luck as well.

What do you like most about your new Hanukkah album, and are there any Woody Guthrie songs on it? What makes your Hanukkah concerts different from others and different from your new live album?

In 2020 – when all our shows were canceled – we did a big livestream show for Hanukkah and the holidays live from Levon Helm Studios in Woodstock, NY. There was no one in attendance that evening, but there were thousands who watched, and it was really a moment in time that we’ll never forget. We had a special one-time lineup for the show with Max Johnson on bass and Maddie Witler on mandolin, and after the stream, we had all these songs recorded and multi-tracked, many of which were Hanukkah songs and covers that we don’t normally play during our normal concerts. We’re really excited to release these live recordings as an album for Hanukkah and also share our versions of Woody Guthrie’s Hanukkah songs, as well.

Do you bring Willow on tour with you?

Willow comes on tour with us – for sure! We have a tour nanny on the road, and sometimes it’s our family, too. Whatever works to keep our baby girl close by.

Has Willow inspired you to write any new songs?

Yes absolutely! We’ve got a number of coals in the oven and lots of new melodies and ideas swirling around. New music is coming soon for sure.

Are your older kids musicians? Do you ever jam with them?

Our other kids are teenagers and both are insanely musical, as well. We play and sing in the house, but they’ve yet to really join us on stage … yet!

Will you be releasing any videos soon?

We’re celebrating the upcoming holidays and our new live Hanukkah album with a new one-time series called “8 Nights with Nefesh Mountain.” Each night of Hanukkah, we released a new video from our show at Levon Helm Studios, along with a small note from us about its meaning and importance for us.

NEFESH MOUNTAIN’S LIVE HANUKKAH ALBUM AND ITS CORRESPONDING “EIGHT NIGHTS” VIDEO ARE OUT NOW! STREAM IT ON YOUTUBE OR CLICK HERE!