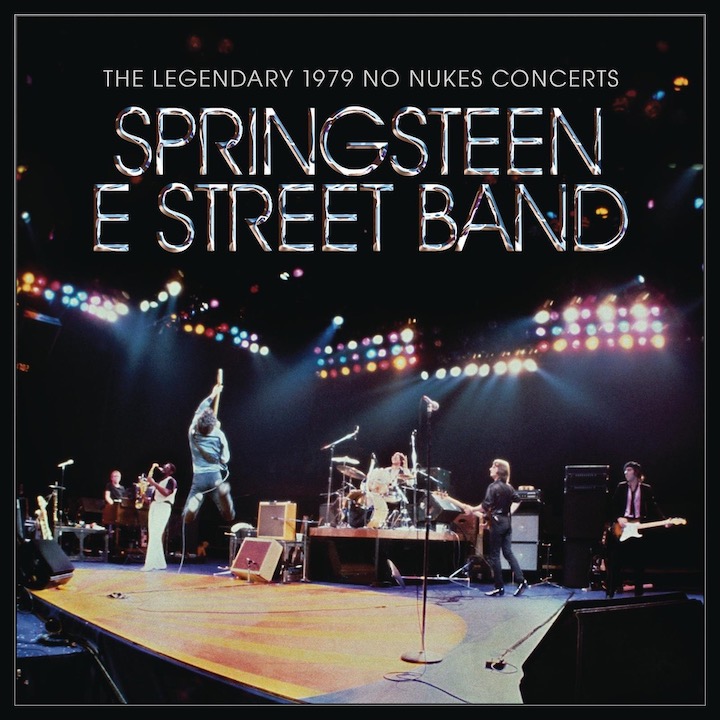 On The Record: Bruce Springsteen’s ‘No Nukes’ Concert, plus Eric Clapton, a Fred Neil Tribute, & More

The Boss Proves It All Night

Though the 1979 recording that resulted from that September’s No Nukes benefit concert filled three LPs, it barely scratched the surface of the performances at that event by Bruce Springsteen and the E Street Band. It included only their version of “Stay,” the 1960 Maurice Williams hit, which featured contributions from Jackson Browne, Tom Petty, and singer Rosemary Butler; and a super-high-octane medley that combined a bit of Little Richard’s “Good Golly Miss Molly” with nods to the Mitch Ryder versions of “C.C. Rider,” “Devil with the Blue Dress,” and “Jenny Take a Ride.” Not a single Springsteen original was featured.

It took more than 40 years, but we finally have a much better record of his group’s electrifying set. The Legendary 1979 No Nukes Concerts, a package that delivers the music on two CDs and a video Blu-ray, embraces all the songs (though not every performance from both nights) that Bruce and the band offered during the event. The show features the E Street Band’s classic lineup, including two late members, sax wizard Clarence Clemons, who sometimes steals the show, and versatile keyboardist Danny Federici.

In addition to the aforementioned numbers, the concert contains “Rosalita (Come Out Tonight)” –which opens here with a snippet from “Stagger Lee,” the 1959 Lloyd Price hit, before taking off like a rocket – from 1973’s The Wild, the Innocent and the E Street Shuffle; the title track, “Thunder Road,” and “Jungleland,” from 1975’s Born to Run; “Prove It All Night,” “The Promised Land,” and “Badlands,” from 1978’s Darkness on the Edge of Town; and “The River” and “Sherry Darling,” both of which would show up on 1980’s The River. Also featured are a wild 10-minute cover of Gary U.S. Bonds’s “Quarter to Three” and a show-closing version of Buddy Holly’s “Rave On.”

The album’s release isn’t quite the event it would have been in 1979 when it would have offered a rare record of Springsteen and the E Streeters in concert; subsequent decades have witnessed the appearance of a long list of his performance CDs, DVDs, and Blu-rays. Still, this 90-minute show –which is less than half the length o Bruce’s typical performances, because so many other artists shared the bill – is essential. For Springsteen and the E Street Band, “Prove It All Night” has always been more than just a song title; it has been their mission statement for every concert, and they certainly deliver on it here. If anyone has doubts that this is one of the greatest live bands in the history of rock, The Legendary 1979 No Nukes Concertsshould decimate them.

Clapton Performs for an Audience of One

After the pandemic caused the cancellation of his May 2021 concerts at London’s Royal Albert Hall, guitar legend Eric Clapton repaired to a country house in West Sussex with his longtime accompanists Nathan East (bass, vocals), Steve Gadd (percussion), and Chris Stainton (keyboards). There, they performed a mostly unplugged set that has just been released in a CD/Blu-ray package called The Lady in the Balcony: Lockdown Sessions. The lady in question is the show’s audience of one: Clapton’s wife, Melia.

The superlative 17-track, 73-minute program features some of Clapton’s best-known numbers, including “Bell Bottom Blues”; “Tears in Heaven,” the song he wrote with Will Jennings after the death of his four-year-old son; and “Layla,” the number he penned with Jim Gordon about his then future wife Pattie Boyd, here in a version so different from the Derek & the Dominos original that you may initially not recognize it. Among the other standouts are two songs by Fleetwood Mac founder Peter Green (“Black Magic Woman” and “Man of the World”) and such Clapton-associated blues classics as Jimmie Cox’s “Nobody Knows You When You’re Down and Out” and Big Bill Broonzy and Charles Segar’s “Key to the Highway.”

As recent features in the Washington Post and Rolling Stone have reported, Eric Clapton has lately headed down the same lamentable road as Van Morrison, complaining about vaccine mandates, not to mention posing with Texas’s radical-right Governor Greg Abbott. Last December, Clapton even released a song called “Stand and Deliver,” a collaboration with Morrison that equated pandemic lockdowns with slavery. Unlike that record and Morrison’s bizarre latest release, however, The Lady in the Balcony avoids such subjects. And it makes clear that while Clapton may have lost at least a portion of his mind, he hasn’t lost a bit of his musical talent.

An Expanded Edition of a Fred Neil Tribute CD

The late, great Fred Neil’s bluesy folk songs have been memorably covered by many artists—among them Richie Havens, Tim Buckley, the Youngbloods, Roy Orbison, Dion, Jefferson Airplane, Glen Campbell, Tim Hardin, and, most famously, Nilsson, who scored a Top 10 hit with “Everybody’s Talkin’.” Everybody’s Talkin’: A Tribute to Fred Neil – originally released with 14 tracks in 2018 and now expanded—adds 18 more covers to the list.

The performers include a few well-known artists – such as Eric Andersen (backed by a group that includes John Sebastian) and Rodney Crowell – but is dominated by ones whose talent belies their relative obscurity. Performances of “Dolphins” bookend the record, which incorporates such other obvious choices as “Candyman,” “I’ve Got a Secret,” “The Other Side of This Life,” and the title cut, in which Neil – who quit the music business after only a few years and moved to Florida – appears to have been writing about himself: “I’m going where the sun keeps shining through the pouring rain, going where the weather suits my clothes.”

You’ll need Neil’s own albums to fully appreciate his talent and get a taste of his distinctive deep baritone, but this interpretive set, which is loaded with great performances, deserves a place on the shelf alongside them.

Single Girl, Married Girl, Three Generations of Leaving. If you’re sufficiently conversant with country music to know that this band is named after a Carter Family song, you probably expect it to make traditional folk, country, and bluegrass music that recalls that classic outfit. Wrong. Yes, Single Girl, Married Girl incorporates some banjo and pedal steel, includes a reference to “listening to old country songs,” and has roots in that genre and folk, but the Bangles would be a better reference point than A.P. Carter for this thoroughly modern folk/pop group. This musically varied collection, which features gorgeous vocal work and compelling arrangements, tells the story of the struggles of three generations of women from one family.

The Black Watch, Here & There. This is the 20th album from the Black Watch, an L.A.-based dream pop quartet that formed back in 1987. They haven’t exactly taken the country by storm despite all those years and albums: in fact, they titled a 2019 best-of CD 31 Years of Obscurity. Here & There – which contains 10 new songs by the group’s leader, guitarist, vocalist, and percussionist, John Andrew Fredrick – does nothing to explain why they haven’t attracted a wide audience. Maybe it’s just a matter of bad luck. At any rate, this is retro, psychedelic-tinged rock, imaginatively produced and loaded with addictive beats, ringing guitars, and likable string arrangements. It would fit well alongside, for example, the first Pink Floyd album and Thunderclap Newman’s Hollywood Dream.