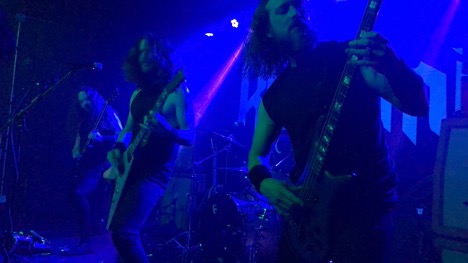 Named for an ancient Egyptian city, Khemmis formed in 2012 with the lineup of Ben Hutcherson and Phil Pendergast harmonizing on guitar and vocals, Zach Coleman on drums, and Daniel Beiers on bass. Beiers parted from the band in April following pandemic-era reflection.

On their sophomore album, Hunted, the group had broken through the mainstream with accolades from Rolling Stone, Consequence, and winning the prestigious Album of the Year Award from Decibel. In 2019, they were signed to Nuclear Blast Records, and released their fourth album, Deceiver, about a month ago. Their first major label release is Decibel’s second best album of 2021.

After two trains and two subways, I arrived at the venue. Saint Vitus is the quintessential metal dive: graffiti on the walls, stickers of bands everywhere (both known and unknown) black toilets, and a backbar filled with autographs and metal vinyl. There are painted black skulls ornamenting the sound guy’s podium, chips in the walls, and a dancefloor fit for moshing. It’s nestled in Greenpoint and hidden from street view. To most, it’s condemnable; to metalheads, it’s home.

Somnuri is a trio of Brooklynites – Phillippe Arman on bass, Justin Sherrell on guitar, and Phil SanGiacomo on drums. They released their sophomore album, Nefarious Wave, in June. They took the stage just before 8:30 p.m. and started with a dissonant hum that swelled into a raucous jam, entitled “Inhabitant.” Pummeling bass pairs with a nasty riff and rigid drumming. Sherrell’s voice has range: he does clean vocals and gutturals, with Arman occasionally contributing. I can’t quite place their sound. It’s a mix of genres – mid career Mastodon syncopation, Gojira style pick scratches, Red era Baroness riffs, a dash of thrash, and hardcore breakdowns.

From their incendiary hair-whipping to their ability of diverting attention to each member, Somnuri really impressed me. The crowd started to mosh during their last two songs, indicating I’m not alone in that opinion. By the time the band was finished with their half hour set (More! We want more!), they were dripping sweat; an indicator of a dedicated performance. Somnuri was an excellent choice for an opener because they complement Khemmis’ sound. They killed it. New fan, excited to follow their career.

In between sets, Khemmis came onstage and set up their own instruments, then walked off. Entirely clad in black against the contrasting stacks of Orange amps, the crowd excitedly waited for setup to finish and their set to start. Their walkout song was Mercyful Fate’s “Evil,” complete with audience participation and they re-emerged through the crowd and returned to the stage.

“Avernal Gate” was the first tune Khemmis played, the first track off Deceiver. Only the second time ever played, we were receptive. Phil and Ben played Flying Vs; Phil’s a light-stain wooden one and Ben’s mahogany. Harmonic guitar shredding and synchronized headbanging from the duo set the tone for a stacked show.

Ben then addressed the fans following that song, “What the fuck is up, Saint Vitus! We are Khemmis from Denver, and this is a song for those who’ve been with us since the first album.” Leading into “Ash, Cinder and Smoke,” the crowd cheered from one of the more popular tracks from 2015’s Absolution. By this point, a sizable mosh pit had formed and continued raging.

Khemmis is a great band because they combine the narratives of power metal-wizards, knights, and quests – with the instrumentation of a doom band, but it’s dynamic and proggy. It is inherently inspired by classic metal acts like Iron Maiden and Yngwie Malmsteen, but innovative to capture attention.

Track three was “Bloodletting,” one of their sharpest riffs from 2018’s third album, Desolation. The house lights turned from purple to orange. Again, Hutcherson and Pendergast brought guitar sorcery with shredding aplenty. Their dual-guitar attack is one of the traits that made me a fan in 2016. Following that, the group started “Three Gates,” and the lights turned blue. This is the shortest track off Hunted, and although a good one, not my favorite. I would’ve preferred “Candlelight” or “Above the Water,” but it was still a thrilling performance. I guess I had to come to Night 1 for that.

For the next song, Phil told us that he would start it off on his own but encouraged us to join him. He bellowed the opening lines to “A Conversation With Death,” with a chorus of fans pleading The Reaper alongside him. Then the band joined in and laid down the massive riff.

Up next was “Living Pyre,” another track from their latest album. It was the first time ever played live! For this song, Phil jumped in my face and towered above me while shredding. After this song, Ben told us how much we mean to them; how he wishes he could thank us all individually, for saving their lives. The last two songs were “Isolation” and “The Bereaved,” two deeper cuts. “Isolation” is a four-minute whirlwind of riffage with galloping drums and a succinct guitar duo-solo. “The Bereaved” begins with melancholic licks before the heaviness takes hold. From there, it’s nearly a ten minute expedition into the Gates of Hell. Hutcherson and Pendergast extended the final solo with synergy, and let the final chords ring heavy.

The battle is over; their axes have prevailed.