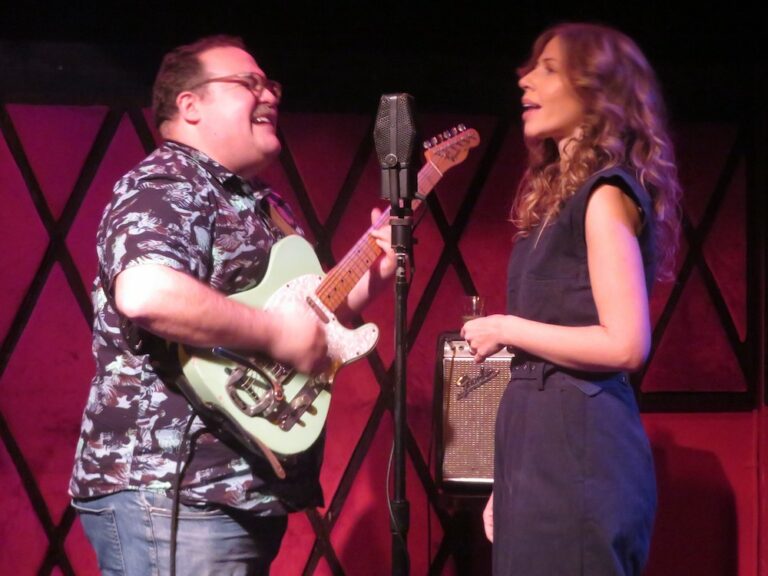 Rachael Price, the lead singer of Lake Street Dive, is more than a pop singer. In recent years, she impressed a small number of New Yorkers by sitting in, unannounced, in the Tuesday night jam sessions at Mona’s, singing vintage jazz songs with an acoustic quartet. Scheduling permitting, she also records and performs with Vilray (pronounced vill-ree), singing duets on stripped down jazz-inspired originals and covers accompanied only by Vilray’s acoustic guitar. Such it was on December 6, the fifth and final night of a spread-out residency at Rockwood Music Hall, Stage 2.

Price and Vilray, who does not use his family name, met in 2003 as students at the New England Conservatory of Music in Boston, Massachusetts. A year later, she would become the lead singer of Lake Street Dive. Vilray forged his own musical path, composing songs and exploring the 1930s and 1940s writing style of Tin Pan Alley. When Price and Vilray reunited in 2015, Price returned to the jazz and swing music that originally inspired her to pursue a musical career as a youth. For the new duo named Rachael and Vilray, the mission was to revisit and recreate a jazz pop heritage from bygone eras.

At the Rockwood Music Hall, Stage 2, Price and Vilray stood on opposite sides of one antique microphone. Facing each other at close range, they sang many songs entirely in unison, harmonizing as Vilray strummed or finger-picked his acoustic guitar. Some of the songs were covers from an older generation, with the majority of the set comprised of Vilray’s original compositions. As he did when he performed solo on the same stage six months earlier, he explained how he writes songs on commission, often for loving couples, and often they are written with wit; he and Price then sang “Hate Is the Basis for Love.” The duo is preparing for the release of  second album together, and so they debuted a few more recent Vilray compositions as well. The one questionable effort was a cover in Spanish which sounded marvelous except that, for those who understood the lyrics, the love song was a bit masochistic and perhaps misogynistic.

Vilray performs this music well as a solo artist when Price is unavailable, but together the synchronous duo was more than outstanding. They understand the genre on a loving and intimate level. This style of music is seldom performed, and even more so rarely done in such a quiet, uncluttered format. How wonderful it would be for Rachael & Vilray to open for Lake Street Dive someday and introduce this music to a wider audience.