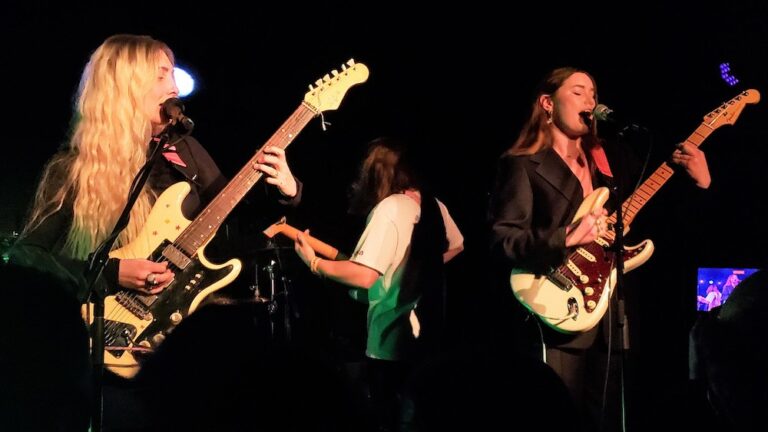 Every budding band dreams of riding a rocket to success. Wet Leg has hopped onto that rocket. In the past six months, Wet Leg has zoomed from a band hardly anyone knew to one of the most hyped buzz bands of 2021.

The fairy tale starts in the Isle of Wight, an idyllic and pastoral island in England that is accessible only by boat. Rhian Teasdale and Hester Chambers became friends there as college schoolmates. Reportedly one evening in 2019, 10 years into their friendship, the two found themselves at the summit of a Ferris wheel, where sudden inspiration led them to commit to starting a band. Maybe that origin story is exaggerated, but it serves well as a whimsical beginning for the fairy tale of Wet Leg.

Teasdale and Chambers dove into their musical project during the pandemic, releasing its debut song, a tongue-in-cheek “Chaise Longue,” in June 2021. Shortly thereafter, a video for the song helped the band gain media attention plus millions of streams and video views. The band released a second song, “Wet Dream,” in September 2021. Wet Leg released two songs, “Too Late Now” and “Oh No” on October 30, along with an announcement that a self-titled debut album will become available on April 8, 2022.

Wet Leg scheduled a three-city seven-concert showcase tour in the United States for December 2021. Tickets sold well, especially considering that ticket holders knew less than a handful of songs. Wet Leg will return to the states in March. Based on buzz alone, the local promoters already moved the show from the 650-capacity Music Hall of Williamsburg to the 1,800-capacity Brooklyn Steel. Like the current shows, the March 10 concert also will happen before the official release of the album.

Adding musical support from keyboardist/guitarist Joshua Omead Mobaraki, bassist Ellis Durand, and drummer Henry Holmes, Wet Leg landed in America on December 6 and performed its first American performance at the 250-capacity Mercury Lounge on December 7. This would be followed on subsequent nights with shows at the 150-capacity Union Pool and the 280-capacity Baby’s All Right, both in Brooklyn, also squeezing in a brief appearance on television’s Late Night with Seth Meyers. The following week the band would play two shows in Los Angeles and two shows in San Francisco, California.

Wet Leg walked through the crowd to the stage of Mercury Lounge as the public address system played Howard Shore’s “Bag End” from the soundtrack of The Lord of the Rings: The Fellowship of the Ring. The set could promise only four fan-recognizable songs, so it was important for the band to start and end with known songs. With only two other songs familiar to the public, this audience was needing to be open to newness.

Indeed, the fresh, breezy indie-pop anticipated by the audience became a promise delivered. Wet Leg performed the four released songs, nine additional originals, plus a cover of Talking Heads’ “Psycho Killer” over a 50-minute set. Blame it on jet lag, but the band had a few false starts. Teasdale started “I Don’t Wanna Go Out” again after the band just finished playing it. She also forgot how to start the rarely played “Piece of Shit,” stumbling until she asked the other band members how to start it. In both cases, these goofs led her into a fit of the giggles.

Each song was compact, so tight that it did not allow for any improvisational wiggle room whatsoever. Light, bouncy and joyous, the songs were built for sing-alongs and hip-swaying, with building crescendos and a few gang harmonies. Gentle twists in the arrangements gave the songs a cutting edge. Live, Teasdale offered a magnetic charisma that made her soft vocals that much more endearing.

The audience appeared pleased with the new songs. Likely, the audiences that will attend largely the same show in March also will approve. Indie-pop is still a popular genre, and Wet Leg is bringing it a breath of fresh air.