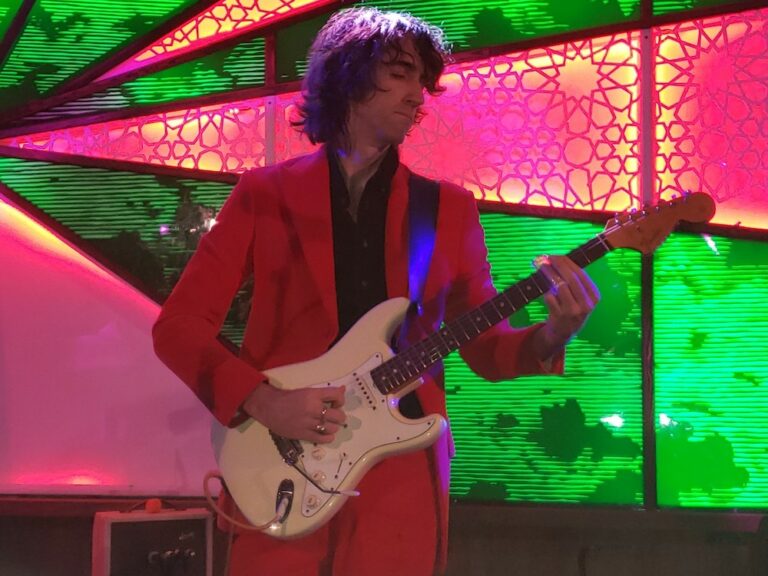 Guitarist Steve Marion launched his music career more than a decade ago in his bedroom in Fredon, New Jersey. Using his electric guitar and his computer, he recorded several original instrumental compositions under his stage name, Delicate Steve. In the 12 years since that modest beginning, Marion progressed to recording in studios and has performed live and recorded with the Black Keys, Paul Simon, David Byrne, Tame Impala, Dirty Projectors, Mac DeMarco, the Growlers, Yeasayer, and others. His path has been a slow but steady blossoming, steadfastly remaining true to his vision of crafting wordless guitar music.

At the Sultan Room, Delicate Steve, which is also the name of his band, performed two sets. The performance began as a trio (with bassist Martin Bonventre and drummer Rosie Slater) playing original instrumental pop rock music. Marion’s challenge on that stage was to make his guitar sing. After all, he was going to provide 100% of the leads, supported simply by a bassist and drummer as the rhythm section. Sometimes using a glass slide and flat picking, sometimes finger-picking, Marion used his fluid guitar lines as melodies, often comparable to the style of George Benson or Wes Montgomery. The music was more pop than jazz, though, while never reaching the level of raucous rock. Marion played his strings and avoided shredding dynamics, feedback, and coarse distortion. That Marion could sustain this smooth, lyrical approach without repetition for 50 minutes was impressive.

The set seems too brief when the three musicians walked off the stage after 50 minutes with no explanation. The audience called out for an encore. Marion returned to the stage within minutes, this time dressed in a red suit, accompanied by the Bonventre and Slater from the first set plus two additional musicians, keyboardist Eliot Krimsky and drummer Jeremy Gustin. The quintet then played a set of instrumental versions of traditional Christmas songs. While Marion tried to re-imagine the songs a bit, he was locked into the songs’ melody lines and so improvisation was minimal.

Overall, Delicate Steve was able to bridge two musical styles. He showed that he was the musician’s musician, playing lengthy guitar lines from the beginning to the end of his performance. He also delivered a warm, upbeat, and danceable collection of songs to please the casual listener. It was a compelling combination.