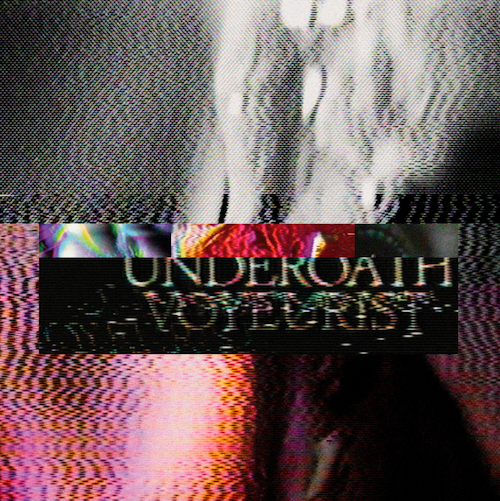 Metalcore revolutionaries Underøath have returned with their ninth full length album, Voyeurist , out today, January 14, from Fearless Records. This is the band’s first self-produced record and a massive return from the Tampa, Florida sextet.

Underøath formed in 1997 and had several lineup changes before coming to their current lineup: Christopher Dudley on keyboards, Timothy McTague and James Smith on guitar, Grant Brandall on bass, Spencer Chamberlain on vocals, and Aaron Gillespie on drums and vocals. Gillespie is the only member from the band’s original lineup. Underøath has been a force in several heavy genres including metalcore, post-hardcore, and screamo. They’ve been Grammy nominated three times and have two RIAA Gold Records. If you’re keeping up, you know that the band has also announced an upcoming spring tour with Spiritbox and Every Time I Die, which stops by our area in March.

Voyeurist is the band’s first album since 2018’s Erase Me and sees the band hitting their stride creatively. The opening track, “Damn Excuses,” starts the record off with a fade in that boils over into a vicious, chugging riff. Spencer’s vocals are some of his most intense yet (and I’m a big UØ fan). Not only that, but the lyrics of “Damn Excuses” set the scene for vengeance: “You never gave me anything I wanted but I’m stuck in the cycle with you / Fuck your revelation and fuck your weak conviction / I am finally exposing the truth.” Spencer’s screams and Aaron’s clean tone are nicely paired throughout this song. The once Christian metal band has distanced themselves from Christianity in recent years… and they are pissed.

“Hallelujah” has an ensemble of voices that mimic a chorus, but upon a closer look, the listener realizes “we’re not dreaming” and “this is hell.” The verses are reminiscent of early UØ albums, such as Define the Great Line. The difference between that album and Voyeurist is the fidelity; since UØ self-produced this record, the vibrance of their instruments really resonate. You are now brought right into their music.

Then, track three takes a different turn. “I’m Pretty Sure I’m Out of Luck and Have No Friends” begins with a tense keyboard glinting and an ominous dial tone. It feels like the intro to a horror movie. No answer, redial, and a 9-1-1 dispatcher asks what is the emergency. After a subdued beat drop, we hear our narrator talking to himself after “taking too much” and trying to calm down. It’s a very tense song about isolation and potentially overdosing.

“Cycle” features trap-metal upstart Ghostmane in another song about breaking patterns. Immediate vocals and drums that sound strained (as a compliment) fill it out with Aaron and Spencer singing in tandem. One of the most intense lyrics is found on this track, “empty as God.” Here we have another big denouncement of their former Christian upbringing.The repetition during Ghostmane’s verse sounds desperate – him and the band are trying to shake the pattern and break out from being inside their own head, really pleading with themselves.

Voyeurist has several forays into other genres of music aside from metal. “Thorn” begins with another fade-in to an industrial-style riff that is all but stabbing. The entire song is very bass, synth, and drum heavy. It even has a DnB style staccato in the breakdowns. As for the vocals here, Spencer and Aaron have outdone themselves, especially with the delivery of the line, “better off this way.” Though the penultimate track, “Numb,” is highly EDM and dubstep heavy. It reminds me of The Matrix.

“(No Oasis)” is the most suspenseful track on this record with its pensive and eerie keyboard intro. It’s quiet, almost trepidatious, but still foreboding with a Vincent Prince-inspired maniacal laugh at the end t6hat segues perfectly into “Take a Break,” a tech-y and reverb driven banger that encourages listeners to step away from social media. Underøath said in a statement that social media is a mask and “that facade masks a lot of what we actually experience in life.” Provocative lyrics about kicking that habit are inspirational.

The album’s closing track, “Pneumonia,” is a personal song for guitarist Tim McTague. This one is an atmospheric journey that is contemplative and pensive and a stirring tribute to McTague’s father, who passed away from pneumonia. It was also a single that released on September 22, 2021, exactly one year after his father’s passing. “Pneumonia” is one of UØ’s longer songs being over seven minutes long and incredibly expansive throughout. There are three full minutes before a soft breakdown, which is a cathartic build and release. This song lets the instruments breathe by letting their tones reverberate. The distortion of the guitars are welcomed in the midsection – a healthy mix of ethereal majesty and underpinned authenticity.

Around the six minute mark, the band changes pace and returns with one of the heaviest moments in any of their former songs: a scream that goes for about 20 seconds with a pummeling riff. The final verse is terrifying, “As I drift to the brightest black / Weightless / Lifeless / Endless / No way back.”

After twenty years, Underøath cannot be chained down. Voyeurist is magnificent. From someone who has been a fan since Lost in the Sound of Separation, I cannot express how wonderful it is to hear a band constantly reinvent themselves and push themselves that much further into unrivaled territory. I’m hoping for yet another Grammy nomination. However, this time, they better win.

THE NEW UNDEROATH ALBUM, VOYEURIST, IS OUT TODAY WHEREVER YOU LISTEN TO MUSIC!