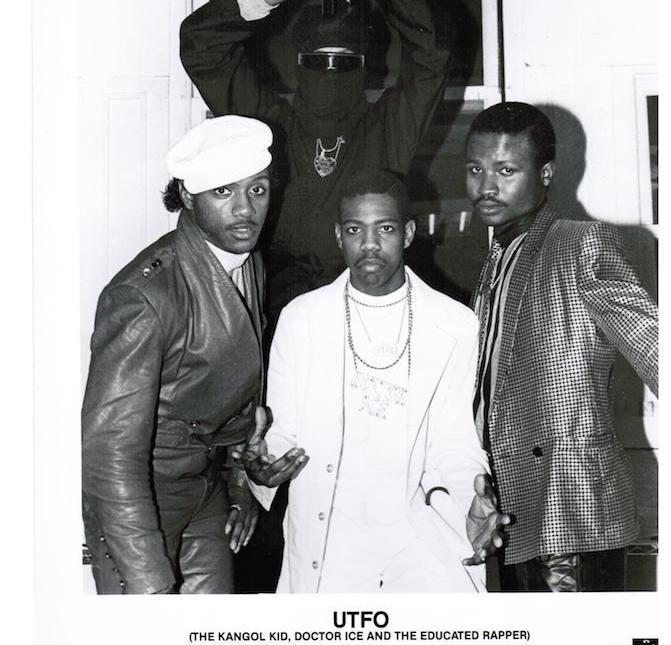 Brooklyn hip-hop pioneer The Kangol Kid always wore those hats and he used to say, “I never lose because I’m all about winning.” Dude did a lot of winning. As part of UTFO with Dr. Ice, The Educated Rapper, and Mixmaster Ice, he found fame with “Roxanne Roxanne” in 1985. It rose to No. 10 on the Billboard R&B chart, eliciting a record 25 answer songs in what became known as “The Roxanne Wars.” At first they called themselves UFO, but Freddy Munao of their label Select Records had them change it because of the British 1960s band of the same name. They decided upon UTFO (short for Untouchable Force Organization).

I was working for legendary New York publicist Carol Ross at The Press Office in an upper West Side brownstone on Riverside Drive when Munao hired Ross to do UTFO press. That’s how I became Kangol’s publicist, and later, his friend.

Kangol was a multi-talented rapper-producer-arranger-composer who got his start breakdancing as part of rapper Whodini’s stage show. As produced by R&B group Full Force, UTFO’s self-titled ’84 debut was one of the very first rap records to use sampling on a commercial release. He was also the first hip-hop artist to sign a sponsorship deal – in his case it was with Kangol Headware.

He was the nicest guy you’d ever want to meet.

His hat is in the Collection of the Smithsonian National Museum of African-American History and Culture.

Once at his house, he told me he could make a hip-hop record out of any song. I took his dare and told him to prove it. We went downstairs to his home studio and laid down a track with me singing Lenny Welch’s 1962 soul ballad “Since I Fell For You.” He added some human beatbox stylings and all kinds of percussive effects… and damn if it didn’t hold up as hip-hop 101.

Then there was the time he got into an argument with Dr. Ice about some girl and it escalated into fisticuffs. I found myself breaking up the fight but not before getting clocked on the side of my head with a roundhouse right.

The day of the Strawberry session was a hot August day in the middle of a tight pennant race between the Mets and the Cardinals. Bad timing.  I shuttled news crews from ABC, NBC, and CBS in and out of that small Queens studio and Darryl was seen rapping on all three networks on the afternoon of a big night game.

My name is Darryl, I’m a baseball player

One thing I forgot to say-a

I get screams from all the girls

Everybody in the stadium, screams for me

Strike one, strike two, but no strike three.”

That night, Met outfielder Lee Mazzilli called out Darryl on television for taking himself out of the starting lineup. The Cardinals were in town. It was an important game. Straw had said he “didn’t feel good.” This after he was seen on all three networks rapping? That didn’t sit well with the Mets. Maz questioned Straw’s loyalty to the team. It caused dissension in the clubhouse for the rest of the season. I joked with Kangol he broke up the Mets that year.

The Kangol Kid was born Shaun Shiller Fequiere to Jamaican parents in 1966 New York City. He had absolutely zero interest in reggae music. I once played him some Bob Marley and he scoffed at the “riddims.” “That stuff’s whack,” he said.

After the success of the debut, UTFO made Lethal in ’87 which included metal band Anthrax on the title track nine years before Run DMC and Aerosmith teamed up on “Walk This Way.”

After forming his own production company, Kangol’s Kreations, he started his own PR firm, Kreative Media, lecturing at high schools and colleges on the business side of the music business, plus starting on endeavors to create an awareness campaign for breast cancer, for which in 2012 he became the first rapper to be honored by the American Cancer Society.

Rest in Peace, my friend. I miss you.