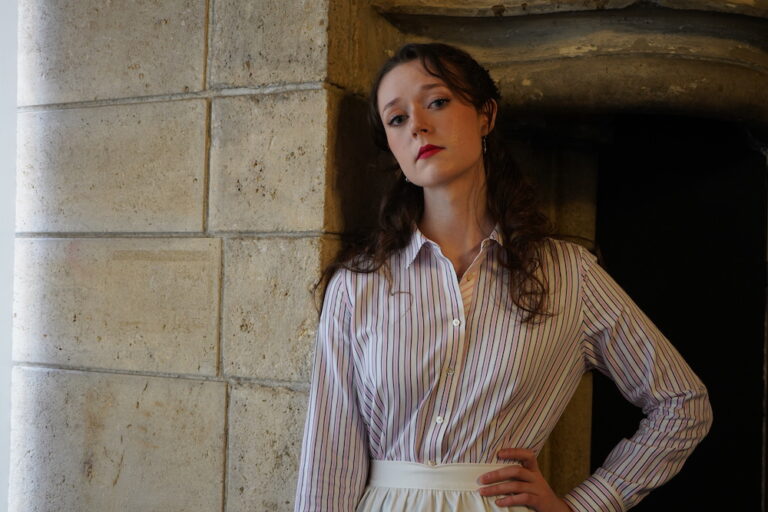 Over the weekend, singer-songwriter Isabel Press share with the world yet another side of her. Like every other musical and vulnerable side we’ve come to know thus far in her career, it is one that is filled with much needed catharsis.

Vermont-hailing Isabel Pless twinkles and croons over acoustics that all but bring goosebumps to each and every listener. The spirit of the moon and the stars fill every fiber of her being, which makes her vulnerable compositions and whimsical poetry a true universal experience. Therefore it is not just her otherworldly new single, newly released single, “More to Give,” that lets you this rising star’s heart and soul, but her entire package as a musician.

Her fans are her peers, relating to her folk pop stories and fueling the fire that is putting melody to the difficulties of everyday – predominantly as a young, impressionable woman living in the modern day. Her own truths and overarching passion are littered in her work, so while said 100,000+ fans were getting to know her on the Internet during these pandemic times, they felt like they had a friend – a talented confidant – in Miss Isabel Pless.

With such a whirlwind world we are living in, what does being a singer-songwriter and having music in your life mean to you?

Songwriting has always been an avenue for me to work through and understand what I’m feeling. It’s an emotional process as much as it is a creative one. Writing music is my way of connecting to myself and hopefully connecting with others, too. I hope my music can offer a bit of relatability in a crazy and digital world such as ours where it’s easy to feel really isolated.

“More to Give,” finally and amazingly, has been out for a few days. Why was now the right time to give this song an official single release?

I’m a major perfectionist and have a tendency to feel like I could and should always be doing more to improve myself. That’s not always the best mindset to have because sometimes you have to just accept certain qualities about yourself… or meet yourself halfway. While I was doing virtual classes last year during the pandemic, I was at home in Vermont and I got caught in this very vicious cycle of feeling like I wasn’t doing enough. The truth was that there really wasn’t much else I could be doing due to the pandemic and that was hard for me to accept. I think a lot of people can relate to that feeling so this feels like the perfect moment to release “More to Give.”

What are you hoping people take away from “more to give” and this era of your art?

I hope people can listen and connect with what I’m saying – I hope they can find some solace in the fact that everyone is going through this difficult time together. As a young person, I’m aiming to capture those unique experiences of attempting to find your place in the world for the first time with my art.

Comfort. That is what comes to mind when listening to you, watching your videos, and dissecting your lyrics. What is your writing process like for a song like “more to give,” which encompasses that feeling?

I’m so glad that’s what comes to mind when you’re listening to my music! That’s exactly how I hope people feel. I started “More to Give” with the first verse which I posted on TikTok. I wrote it solo in my bedroom really late at night (or really early in the morning depending on who you ask). I was feeling very stuck – I’d been home from school in Vermont for about 18 months at this point, and while I love my home state, I felt cramped. That feeling seemed to resonate with a lot of people because the video ended up doing well, so I was anxious to finish the song. I wrote the second verse a couple weeks later, and then my friend Andrew Tufano and I co-wrote the chorus – we also tweaked a few verse lyrics together. Andrew also produced the track.

In general, I just try to write what I feel and describe it using very specific (but still relatable) language. I want to feel understood and I want other people to be able to hear the song and feel understood as well.

What does 2022 have in store for you as you balance TikTok growth, your well-deserved musical career taking off, schooling, and more? Anything we can look forward to in between all of that? Or any hopes you want to speak into existence via our readers?

A lot more released music! I’m working on lining up a bunch of finished songs that I’m ecstatic for people to hear. Connecting with listeners through music is my favorite thing in the world. I’ll also be playing a lot more live shows this year so keep an eye out for those! And, of course, much much more TikTok content as I continue to write and release.

I’ll also be graduating in May with a degree in Cognitive and Linguistic Sciences from Wellesley College. That’s really exciting for me because I’ve worked really hard on academics these past four years. I’ll miss college, but I’m so excited to move onto the next chapter of my life and focus all of my time and energy into my music.

Speaking of the app, I think it’s safe to say that TikTok is a place for creatives to go. Whether seeking inspiration or reception or perspective, the platform has an artistic edge that is putting people out there in a variety of ways. For fellow musicians and creators of all kinds, can you suggest anything to them or advise them in any way on navigating putting their videos (and subsequently themselves) out in the world?

Absolutely! TikTok has been such a useful tool for me to share my music with the world and has helped connect me to so many wonderful people. I’ve had to learn the hard way that it’s important to not put too much pressure on yourself when making online content – unfortunately, the videos you want to perform well will not always meet your expectations. Basing your self-worth or a song’s quality off of numbers will kill every ounce of joy that comes with making art. Write and post what feels good to you!

My two biggest pieces of advice: be genuine and utilize the delete button. Post content that’s true to you and is enjoyable to make so it doesn’t feel like a chore, and if you end up hating it later, the delete button is there for a reason. Putting your art on the Internet does take a certain level of vulnerability, but there’s no one right way to do it and nobody gets to dictate that but you.

“MORE TO GIVE” IS THE NEW SINGLE FROM ISABEL PLESS AND IT’S OUT NOW WHEREVER YOU LISTEN TO MUSIC! FOLLOW ISABEL ON TIKOK HERE!