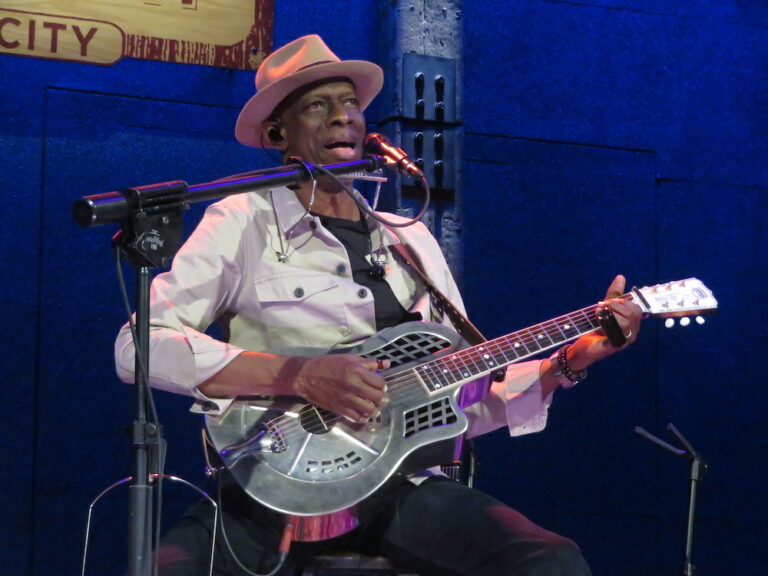 Kevin Roosevelt Moore, known professionally as Keb’ Mo’, sat on a chair on the City Winery NYC stage surrounded by five guitars. He laid for his disposal one hollow-body electric, two acoustic and two resonator guitars, and switched them off with almost every song. Behind Mo, his band consisted of one musician, drummer Casey Wasner, who is a singer-songwriter in his own right. Mo told the audience that he would have brought more musicians, but their wives said “No!”

The audience cheered each time Mo reached for one of the resonator guitars. The resonator guitar meant he might be playing slide on a vintage-styled blues song. While the five-time Grammy Award-winning musician plays various strands of Americana music, he may be best known for the joyful glow he gives to the often downtrodden blues genre.

The reduced personnel on stage meant sparse musical arrangements. On several songs, even the drummer sat back to enjoy Mo’s solo performance. In effect, this homey back-porch approach emphasized Mo’s impressive deep-and-gritty vocals and his mesmerizing guitar-picking abilities. The set remained grounded in roots music that was flavored with a modern touch, occasionally swinging more prominently on the pop and country side. Mo brought a considerable bandwidth to his music.

Mo’s set introduced songs from his 16th and most recent studio album, Good to Be, which was released on January 21. Stand out new songs included the title track and “62 Chevy.” The set also featured fan favorites, especially when the audience began shouting requests. Increasing the interactive dynamic, towards the end of the performance he asked for and received generous audience participation on 2019’s “Oklahoma.”

An affable raconteur, he knitted together the broad range of his repertoire by sharing anecdotes between songs, tales not necessarily about the background of the songs but about life as it goes. He interacted with the audience and played requested songs. In general, he brightened the room with his charisma and feel-good, happy-to-be-here attitude. He accented this asset by frequently flashing a wide, neon smile.

At the conclusion of this tour, the California native will return to his adoptive home in Nashville, Tennessee. There, Mo will be among the four 2022 inductees into the Music City Walk of Fame at an April 5 ceremony. Inductees are recognized for their “significant contributions to preserving the musical heritage of Nashville and for contributing to the world through song,” according to the Nashville Convention & Visitors Corp., which oversees the Music City Walk of Fame. Mo will join 92 other music figures commemorated over the past 16 years with a large stainless steel and terrazzo star embedded in the sidewalk of Nashville’s Walk of Fame Park. The City Winery show was evidence of his worthiness for this honor.