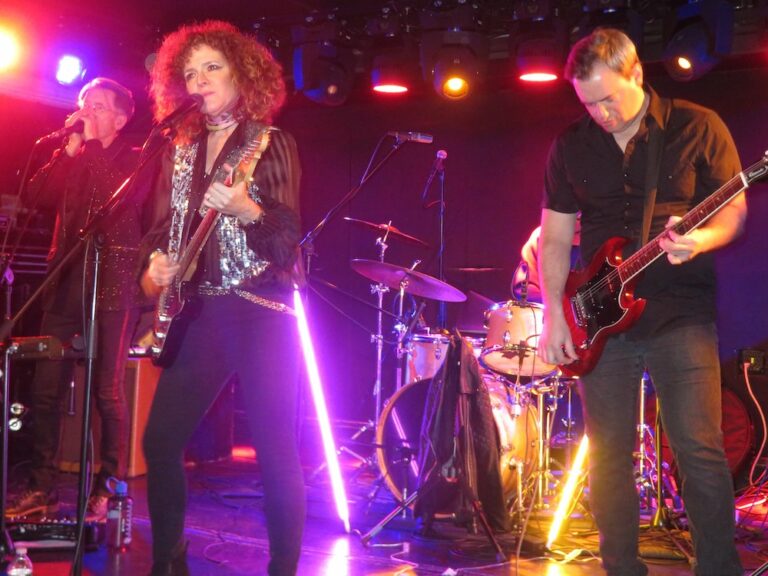 Lily Vakili’s father was a plant geneticist whose career necessitated frequent relocation. Vakili says she was born in Honduras during a military coup. “In the hospital, my dad had to walk over injured soldiers to welcome me to the world. He’s always said that set the stage for everything else in my life.”

Vakili’s parents and five siblings lived in Honduras, Florida, Puerto Rico, Iowa, and Thailand. She left home at age 16 and joined a theatre troupe in Minneapolis, eventually moving on to working as a dancer, actor, summer stage director, choreographer, corn detasseler, night nurse, human rights researcher, and waitress in New York City, Hoboken, and Boston. In the 1980s, she pursued acting, landing small roles in a couple of made-for-television movies. Rooted since 2001 in Montclair, New Jersey, the mother of three became a biotech industry lawyer by day and a rocker by night.

If rock is dead, the Vakili Band is the wrong band in the wrong place and time. If rock has an audience in today’s world, then the Vakili Band is the right band at the right place and time. At Mercury Lounge, Vakili’s passionate vocals, St. Jack’s sizzling guitar licks, Dorow’s bluesy harmonica blasts and the rhythm section’s solid drive drew several formerly complacent listeners into a hip-shaking boogie mode. With its bluesy vocals and guitar approach, the Vakili Band successfully honed in on the spirit of 1970s, when hard rock was king.

Can the Vakili Band help revive the rock scene in New Jersey and beyond? In the 1970s, similar-sounding bands like Twisted Sister, Another Pretty Face, Rat Race Choir, and the Flossie Band ruled the then-thriving New Jersey club circuit. We may have to get past the pandemic to see where this goes.