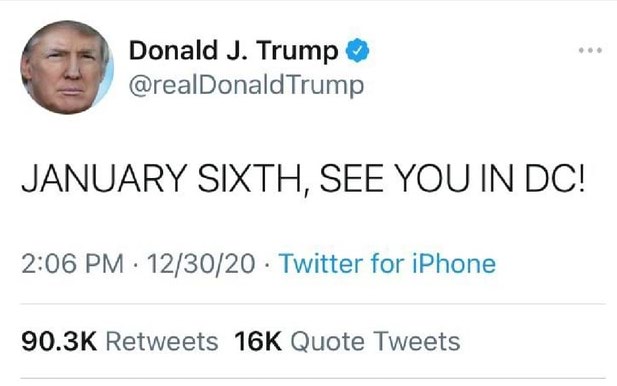 How we got here and where we’re going.

For about a week at the beginning of February 2022, the Republican Party pulled back from the brink of insurrection.

Flirting with this concept since the domestic terrorist attacks on the U.S. Capitol on January 6, a majority of the party in both houses of congress and throughout the country, in the media and in the halls of state governance, have either dismissed or supported the horrors of that day, which resulted in seven deaths, 769 criminal charges, and over 70 convictions thus far. This includes the former president of the United States, who perpetuated this lunacy by telling the great unwashed that the election was stolen, inviting them to Washington D.C., promising via Twitter to “Be there, will be wild!” and then once they got there armed and riled up by crazy talk, encouraging them to “March to the Capitol and fight for your country.” This ridiculousness is ongoing, as he announced at a recent rally in Arizona that he will pardon the convicted if re-elected. But until three words were part of a Republican National Committee resolution last week, all of this was partisan rhetoric, political grandstanding, and genuflecting to the 70% of Republican voters who continue to believe this nonsense.

It was then the RNC censored two GOP senators on the bipartisan January 6 Committee, Wyoming Congresswoman Liz Cheney and Illinois Congressman Adam Kinzinger. This too could have been seen as mere politico shenanigans, until the 168 members referred to their supposed insubordination to the party for “participating in a Democrat-led persecution of ordinary citizens engaged in legitimate political discourse.”

That, apparently, was the game changer.

Those three words could well go down in history as the moment things began to shift in the Republican party. That day, actual “ordinary citizens” who are not white supremacists brandishing weapons, demanding the heads of the Speaker of the House and the Vice President, while smashing windows, breaking-and-entering into a federal building, and beating police with Trump flags, stood up and said, “That’s enough.” Even Republicans who heretofore watched in silence as its party was being hijacked by the insanely seditious goofiness that passes for “the opposition” started to backtrack. This was ultimately the Right dismissing its fringe, as the Left did with distancing itself from the “Defund the Police” movement in 2020. This last-ditch effort kept the Republican Party from being an enemy of the state because that is what that statement underlines. Supporting terrorism of any kind is a bad look, even for fun and argument, especially when representing the entire party’s stance.

When Georgia Congressman Andrew Clyde, five months from the insurrection, noted that it looked like “a normal tourist visit” most people were horrified, but Clyde is just one idiot, and although there are plenty of those in congress, when the RNC, essentially representing the whole of the GOP, frames a violent mob trying to overthrow a national election as Legitimate Political Discourse in a signed resolution, it ropes in every Republican.

For a few weird days, it looked like one of America’s two major political parties was exiting the framework of the U.S. Constitution. That is fairly big news, for it is equivalent to either party supporting al Qaeda. It wasn’t long before at least a few GOP voices put the brakes on this as quickly as you can Osama bin Laden.

Legitimate Political Discourse was announced on Friday, February 4. By Tuesday, February 8 (To be honest, a tad too long to address the rhetorical rejection of the rule of law and American sovereignty, but he got there.) Senate Majority Leader Mitch McConnell denounced it. While he did finally agree that water is wet by calling the events an insurrection, which is what it was, he tamped that down with procedural blather. “The issue is whether or not the RNC should be sort of singling out members of our party who may have different views from the majority. That’s not the job of the RNC,” McConnell said in his damage-control press conference. He conveniently forgot to mention that the Republican Party was sanctioning the murder of police and the attempted harm of members of the U.S. Congress. But it was a start.

This was followed by Senate Majority Whip Dick Durbin praising “my Republican colleagues who have been willing to speak the truth in the last few days,” while also castigating his party by admitting that for months now “the vast majority of my Republican colleagues remained silent while the party leaders declared January 6 legitimate.” Maine Senator Susan Collins echoed this by calling the entire RNC resolution “absurd” and that “every moment that is spent re-litigating a lost election or defending those who have been convicted of criminal behavior moves us further away from the goal of victory this fall.”

It is important to recall when all three of these senators, all of whom publicly blamed Trump for his role in the riot from day-one – McConnell said he was “practically and morally responsible” – had a chance to vote to impeach him when he still held office and did not.

RNC Chairwoman Ronna McDaniel, who announced this hot mess, also began running for cover, claiming the phrase Legitimate Political Discourse was not in the original draft of the resolution. This was quickly backed up by the man who wrote it, some cheap political MAGA hack, David Bossie. For his part, the former president called McDaniel to congratulate her for the resolution and for bravely reframing the horrors of January 6 as patriotic protest against government aggression.

Swap the name Donald Trump with Jefferson Davis and you get the picture.

For his part, House Minority Leader Mike McCarthy, a very silly man, has tried to play this as close to the vest as possible. He knows he may be on the brink of becoming the next House Speaker if things go the way of first mid-term elections for unpopular presidents, and Joe Biden certainly is one (41% approval at the time of this writing), so he has cover. McConnell is not so fortunate. With most of the potential Republican candidates laying in wait to run this November being a rogue’s gallery of knuckle-dragging psychos, it will be tight, and even some indicators are pointing toward the Democrats hanging onto the Senate.

Let that read that political expediency is now at the forefront of the party – not that it wasn’t at any point – but Legitimate Political Discourse has set the bar. Let’s see if the party nominates the man responsible to run for president again.