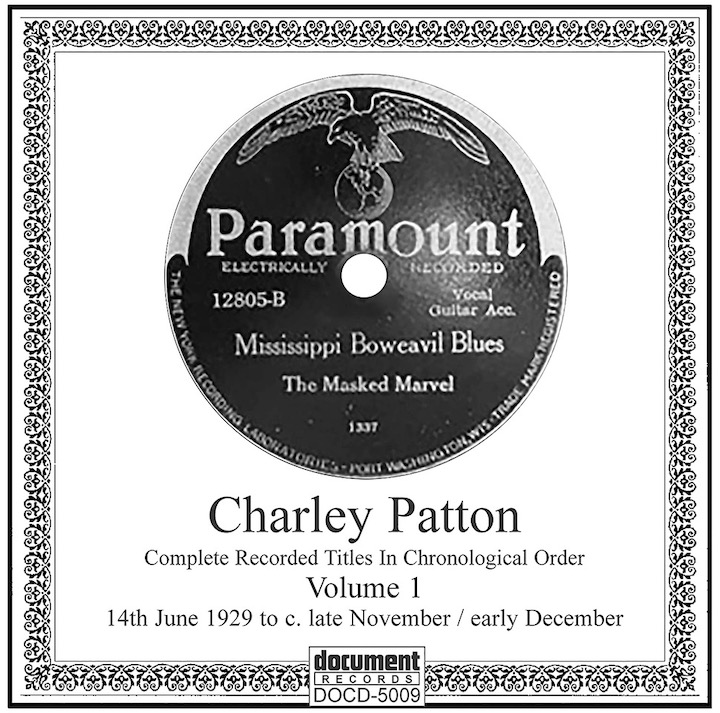 Charley Patton, Volumes 1–3 (1929­–1934). Despite his induction last year into the Rock and Roll Hall of Fame, Charley Patton still hasn’t garnered the sort of wide acclaim afforded to such contemporaries as Robert Johnson. Nevertheless, his passionate, unearthly vocals, complex rhythms, distinctive guitar style, and often-dark lyrics had a major impact on Son House and many other Delta blues musicians. His work has also affected artists like Bob Dylan, who tipped his hat to the blues pioneer by recording “High Water (for Charley Patton)” on Love and Theft and – in an interview included in my book Dylan on Dylan – declared, “If I wanted to make a record for me, I’d record Charley Patton songs.”

Patton’s complete works, which consist of only 63 tracks that were mostly recorded in 1929 and 1934 (the year he died), have been packaged many times. They’re well worth hearing but this newly reissued Document label edition – which has been in and out of print since at least 1990 and consists of three separately available CDs – may not be the best place to get acquainted: though it does contain all his performances, they’re sloppily presented, with tracklists that misidentify some songs and fail to list others. The Grammy-winning and definitive Screamin’ and Hollerin’ the Blues: The Worlds of Charley Patton, which came out in 2001, is unfortunately out of print and consequently very pricey. However, other releases deliver all of Patton’s material for less money than you’d pay for the Document CDs, and at least one of them supplements his recordings with 29 sides by related artists.

Jesse Correll, Inner Shibori. This soulful and jazz-tinged pop album, Jesse Correll’s second CD after 15 years away from the recording studio, boasts major strengths, starting with his silky vocals, an appropriately lush production, and richly textured music. After listening to these deftly written torch songs – which include references to “my shrink,” “love addiction,” “harsh words” being spoken, and “the long farewell” – you won’t be surprised to learn that the Nashville-based artist made the album in the wake of a divorce. However, he says the experience was more like “a breakup with my former self,” and he includes some hopeful material that was apparently inspired by a new love. There are more than a few attention-grabbers in the set, starting with the acoustic “One More Time,” whose rhythmic, upbeat music belies lyrics about romantic longing. “Two days now we’ve made no contact / Eighty-eight more to go,” sings Correll, adding, “Sign me up, I’m a puppet / I’m just hanging on your line / I’m a fool, but fuck it / I just want to see you one more time.”

Mike Zito, Blues for the Southside. Some double albums would be better if they were whittled down to a single disc. Not this one, though. Recorded live in November of last year at the Old Rock House in St. Louis, the set takes off like a rocket with veteran blues/rock guitarist Mike Zito’s own “Mississippi Nights” and continues for more than 100 frequently electrifying minutes. The lion’s share of the 15-song program consists of material from the Texas-based artist’s past albums, most of it written or co-written by Zito, but it also makes room for a rollicking cover of Chuck Berry’s “Johnny B. Goode”; a 12-minute reading of Jimi Hendrix’s “Voodoo Chile”; “Love Her with a Feeling,” by the late Chicago bluesman Tampa Red; and “Texas Flood,” which Stevie Ray Vaughn popularized. Zito’s backup band, which includes a drummer, a bassist, and a keyboardist, are all excellent, as are several guest guitarists, among them Eric Gales, who shares the spotlight on the Hendrix cover. But it is Zito’s own vocals and instrumental pyrotechnics that will do the most to keep you on the edge of your seat, if not up and dancing.

Amy Jay, Awake Sleeper. As song titles like “Inner Critic,” “Remember,” and “Self-Deprecation” may suggest, this first full-length CD from New York-based indie-folk artist Amy Jay is a contemplative, introspective affair. Produced by Jon Seale (Fleet Foxes, Aoife O’Donovan), the record features understated vocals that at times recall the late Judee Sill and lyrics that focus on emotions, memories, dreams, and self-reflection. Jay sings over lush sonic landscapes that emphasize synthesizer, piano, and strings and give all the songs a meditative quality that fits the title of the album (not to mention that of the opening track, “Lucid Dreaming.”) To quote the Beatles, “turn off your mind, relax, and float downstream.”

The Pine Hearts, Lost Love Songs. The Olympia, Washington–based Pine Hearts consist of Derek McSwain on mandolin, Dean Shakked on bass guitar, and Joey Capoccia, who writes all of the group’s bright melodies and clever, evocative lyrics. Joining them for this joyous latest album are former member Lob Strilla on banjo and piano and fiddler Bevin Foley. Fellow Oregonian songwriter and performer Bart Budwig, who winningly coproduced with the group, adds sprightly trumpet to the end of a track called “Oceans and Limousines.” There’s not a bad number on the well-paced program, which is permeated with great harmony vocal work and lively, consummate instrumentation. Is it country? Americana? Rock and roll? Folk? Yes to all of the above. You can certainly hear evidence of McSwain’s bluegrass background and if you listen hard, you can even detect the influence of Capoccia’s days with the Pasties, a punk band he founded. The Pine Hearts have been waiting in the wings since the early 2010s; Lost Love Songs could be the album that moves them to center stage.

Joan Osborne, Radio Waves. Singer/songwriter Joan Osborne shows off her versatility and powerful voice on this live-in-the-studio collection, which she compiled mostly from performances made during radio appearances between 1995 and 2012. The program includes a couple of likable originals (“Little Wild One” and “Saint Teresa”) but the bulk of the set consists of covers: she tackles everything from Motown (Marvin Gaye’s “How Sweet It Is”) to pop standards (“Dream a Little Dream,” a hit for the Mamas and Papas). There are also a few lesser-known numbers, including Bill Withers’s “Same Love That Made Me Laugh.” The album is a bit uneven but Osborne shines on songs like Stevie Wonder’s “Love’s in Need of Love Today,” Sly & the Family Stone’s “Everybody Is a Star,” and Bob Dylan’s “Make You Feel My Love.”