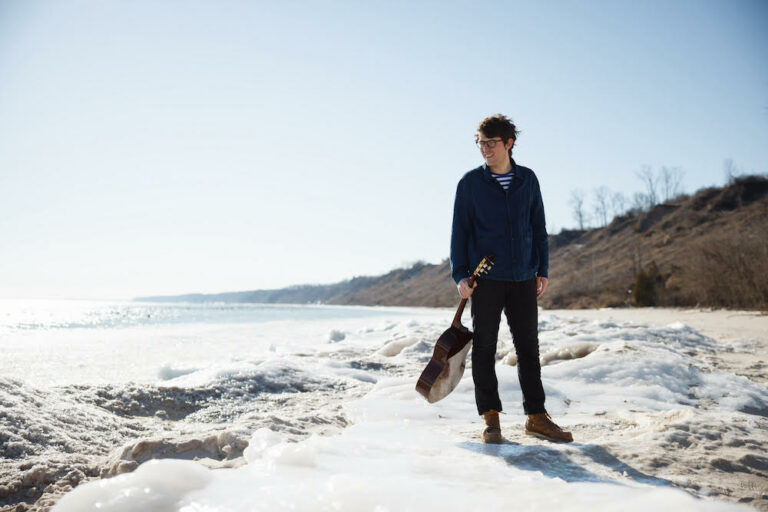 With new music coming, and March shows in New York and New Jersey – and the rest of the U.S. – folk-rocker Trapper Schoepp continues his impressive upward trajectory.

It’s only 32 degrees in Milwaukee, Wisconsin, but folk rock singer Trapper Schoepp is about to pull on a wetsuit and go paddle-boarding on Lake Michigan. “It’s really therapeutic for the mind, body and spirit to live on this great lake,” he says. “Today, I’ll probably just go paddle along downtown.” First, though, he wants to talk about his delightful video for “Yellow Moon” (premiering here at The Aquarian). “It connects so nicely to what we’re talking about with the adventures at sea,” he explains, amused.

The sweetly breezy “Yellow Moon” (originally off Schoepp’s 2021 album May Day) “touches on this idea of the chase, and realizing that when you arrive at that destination, you are still, in the words of Paul Simon, ‘slip slidin away. I was thinking about Moby Dick – trying to catch the big fish, and then once you get it, you end up letting it go.” Of the video (animated by Alex Rosas), Schoepp adds, “I thought it would be so cool to create this band made up of all these fish.”

This is the kind of deft songwriting (with an often humorous twist) that has defined Schoepp’s career. His masterful, melodic storytelling is also evident in another track he’ll soon release, an acoustic reworking of one of his more popular songs, “The Ballad of Olof Johnson” (the original version was released in 2016). This one is based on a dramatic true story from Schoepp’s own family history.

“My great-great-great-grandfather, Olof Johnson, was the gardener to the King of Sweden,” Schoepp says. “As a part of the Homestead Act, Olof and his wife Olivia decided to come over to America. So they came to Chicago, and then they went west to try to get to where they had gotten this piece of land. But they totally misjudged the season: they were in their wagon, and they encountered a terrible blizzard. And what did they do? They literally had to dig a hole into the South Dakota earth, flip their wagon over that hole, and live there until spring.

“I thought it was a cool survival story, and it felt relevant to me right now, with everything happening in the world and everyone hunkered down, trying to get through this moment in time,” Schoepp continues. In his clever lyrical style, the tale takes on a vibe that is at once whimsical and haunting. “They say time plus tragedy equals comedy, right? So I think that is totally relevant in songwriting, as well. You take these bits from your own life, and from your fantasies and the world you conjure up, and out of that comes a song. So I think that is the really fun part. Putting together these songs is like solving a puzzle.”

Schoepp plans to put this new version of “The Ballad of Olof Johnson” as the B-side to his next single release, “Dink’s Song,” which is another song that has historic roots. “Dink’s Song” originated in the early 1900s, then resurfaced in the 1960s Greenwich Village folk scene when luminaries such as Bob Dylan and Joni Mitchell covered it. With his own version, Schoepp clarifies, “I think of myself as being a link in a long chain of folk musicians and rockers, that world, so that’s why that one felt good to do.” Rounding out the new material, he will also release “Something About You,” in a rearranged version than what first appeared on his critically acclaimed 2021 album May Day.

To help promote this new material (and May Day, for which he couldn’t do a full tour last year), Schoepp will head out with his band on their first cross-country tour since pre-pandemic times, hitting Bar Freda in New York on March 9, and then Concerts in the Studio in Freehold, New Jersey on March 12.

It’s been a prolific career, and it’s one that Schoepp started early. Growing up in Ellsworth, Wisconsin, he started learning to play guitar after a serious bike accident left him laid up for months. It wasn’t long before he started writing his own songs. “I grew up on fifty-plus acres in the middle of nowhere, so you had to make your own fun and make up your own songs to sing when the cover song well ran dry,” he says.

At 16 years old, Schoepp put together a band that included his brother Tanner (who still plays with him) and started playing professionally. They eventually landed a residency at the Blue Moon Coffee Shop in Red Wing, Minnesota. After moving to Milwaukee to attend college, Schoepp continued to build his musical career, releasing his first album, Run, Engine, Run (under the name “Trapper Schoepp & the Shades”), in 2012. More albums followed: Rangers & Valentines (2016), Bay Beach Amusement Park (2017), Primetime Illusion (2019), and May Day (2021).

It’s been a productive (and highly praised) career – and, as Schoepp proves with his upcoming new music releases and touring, he’s still got a lot of creativity in him. But before he gets to all that, though, he’s got to head out for that frigid winter paddleboarding. “High noon is my time,” he exclaims cheerfully. “It’s a beautiful day in Milwaukee, Wisconsin!”

TRAPPER SCHOEPP WILL PLAY BAR FREDA IN NYC ON MARCH 9 AND CONCERTS IN THE STUDIO IN FREEHOLD, NJ ON MARCH 12! FOR TICKETS AND INFO, VISIT HIS WEBSITE!