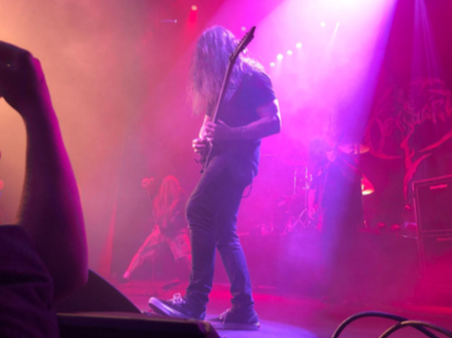 Man, it feels so good to be back in the pit.

A frigid Sunday night in Jersey City brought the metal diehards out to the White Eagle Hall, a beautiful theater and an unusual pick for a metal show, for the penultimate show of the Decibel Magazine Tour. The lineup of Enforced, Gatecreeper, Municipal Waste, and Obituary was too good to pass up. I have seen all of these bands on separate occasions and enjoy them in their own right, but together? I could not miss it.

I grabbed my usual spot against the barricade and saw what I like to call ‘the apprehensive mosh gap:’ a big space between the first couple rows of people and the rest of the crowd forming a semicircle towards the back of the theater. The apprehensive mosh gap occurs when a crowd is uncertain of a new opening band, if they approve, the gap will be filled with moshing. If not, that gap is No Man’s Land and the distance is palpable.

First band up was Richmond crossover thrash band Enforced. Riding high off their 2021 sophomore album Kill Grid, they took the stage promptly at 7:00 p.m. and unleashed a ruthless fusillade of metal. The gap was filled after a moment; the band has earned fan approval. The quintet played under red, yellow, and white lights with lead singer Knox Colby bringing a charismatic and undeniable attitude to the stage. When they struck up “The Heat,” a mosh pit broke out – and I jumped in with notepad in hand. The pit did not stop for the remainder of their half-hour set. They thanked the crowd and were met with considerable applause. Crossover thrash is alive and well.

In between sets, I chatted with a few members of the crowd and found two brothers – Jose and Sergio – who came to this show, purely for Enforced. That’s great news for a relatively unknown band to have dedicated fans already!

Next on this stacked lineup was Arizona’s Gatecreeper, one of the best rising old school death metal (OSDM) bands of the past decade. Their 2019 album Deserted was universally acclaimed as one of the best metal albums in that year. They stepped to the stage, turned on the green and purple stage lights, opened with “Puncture Wounds,” and an instant mosh pit broke out. I stood on lead guitarist Eric Wagner’s side of the stage. Wagner, aka the Darkezt Cowboy, laid down the guitar with dive-bombs and scourging riffage, all while commanding the onlooking moshers. I love Wagner’s guitar sound, those Lone Wolf pedals make his guitar sound like a chainsaw. Vocalist Chase Mason has one of the best growling voices in metal and this show was no exception.

Gatecreeper played a career-spanning set; songs from Deserted, a few rapid cuts from 2020’s An Unexpected Reality, and some throwbacks to their first album Sonoran Deprivation. They finished their set with “Flamethrower,” to much applause. Eric threw a pick at me and I snatched it; my second caught from The Darkezt Cowboy. I also continued the tradition of getting a fist bump.

Municipal Waste followed and hit the stage around 8:40 p.m. Clad in bullet belts, stud bracelets, skinny jeans, and chunky Reeboks, it’s as if they emerged from a time capsule-set to 1980s Bay Area thrash scene. And they play to that genre archetype well by playing speedy, slimy, toxic-waste filled thrash about partying and drinking.

Lead singer Tony Foresta led the thrashers over an 18 song setlist, including selections from their debut album, 2017’s Slime and Punishment, their most recent EP, played a NIght Birds cover, and hinted at a new upcoming album and summer tour. All the while, cracking jokes and embarrassing crowd surfers and stage divers taking too long.

Guitarists Ryan Waste and Nick Poulos have electric chemistry and provided delightful soundtracks to all of our beer drinking debauchery. Their final song, “Born to Party,” started with the crowd favorite chorus of, “MUNICIPAL WASTE IS GONNA… FUCK YOU UP!” Tony requested “the world’s largest circle pit ever” earlier in the set and for this track, I’m not sure if it was the biggest ever, but surely a contender as the whole crowd became liquid.

Lastly, the Florida death metal legends Obituary took the stage following Pat Travers’ “Snortin’ Whiskey,” their usual walkout song. They started with “Redneck Stomp,” an instrumental tune with a riff that made the crowd feral. Frontman John Tardy came out after that song and dove right into “Threatening Skies.” Throughout their set, Chase and Eric from Gatecreeper and Knox from Enforced were seen stage diving into fans ready to receive them.

Around seven songs into their set, the lights were cut and the only thing heard was the rumble of thunder. After a minute of no lights, the stage relit – this time with their classic red logo banner behind them and performed a mini Cause of Death set; including “Chopped in Half,” “Turned Inside Out,” “Find the Arise,” and “Circle of the Tyrants.” Their last song was “Deadly Intentions”…until the crowd asked for an encore, and they delivered a four-song batch of fan favorites, ending with “Slowly We Rot.” Obituary officially topped my list for the band I’ve seen the most times… reason being they kick ass every time.

Several times during the show I hopped in the pit and wrote my notes dodging bodies. I would not have it any other way. Although I have a massive bangover and my whole body aches, this lineup was worth every Advil.