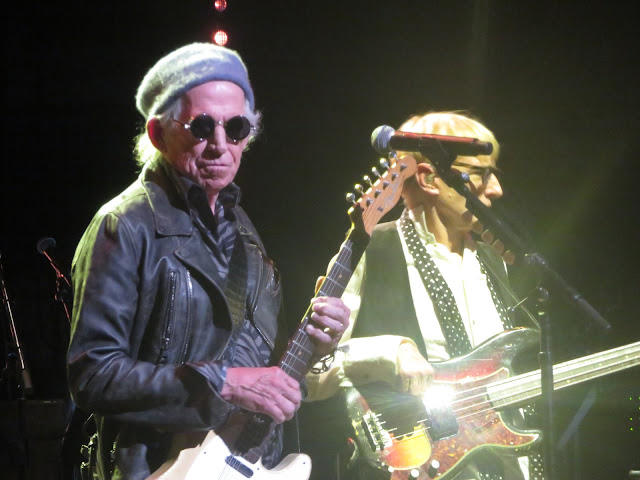 The top billed act, Keith Richards & the X-Pensive Winos, performed for the first time in nearly 30 years. The original X-Pensive Winos consisted of the Rolling Stones guitarist backed by guitarist Waddy Watchel, keyboardist Ivan Neville, drummer Steve Jordan, and bassist Charlie Drayton. Drayton is currently touring in Bob Dylan’s band, so Will Lee substituted. The group performed a Winos song, “999,” plus two songs that Richards normally sings in the Rolling Stones, “You Got the Silver” and “Before They Make Me Run.”

For many of the marquee attractions, the event offered a unique opportunity for unusual experiments. Pairings were a significant part of the program, matching Jackson Browne with Warren Haynes, Melissa Etheridge with Danny Clinch, David Shaw with Ivan Neville, Larkin Poe with Tyler Bryant, Hozier with Celisse, Hozier with Allison Russell, Mavis Staples with Bernie Williams, Jimmy Vivino with Bernie Williams, and more. The performers also used the occasion to sing cover songs that normally would not be a part of their concert repertoire.

Bill Murray, Laurence Fishburne, Steve Schirripa of The Sopranos, and Michelle Buteau rotated as hosts when the crew needed to reset the stage between the musical performances. Kiefer Sutherland and Gina Gershon were advertised as hosts but did not show.

Proceeds from the four-hour concert benefitted God’s Love We Deliver, a charity dedicated to delivering individualized meals to nearly 10,000 homebound New Yorkers unable to shop or prepare meals. Since its inception in 2017, Love Rocks has raised $20 million and helped fund 2 million meals. This year’s concert celebrated the organization’s delivery of its 30 millionth meal. God’s Love We Deliver CEO Karen Pearl informed the audience that half of the proceeds from the 2022 concert will aid victims of the conflict in the Ukraine.

Near midnight, the fundraiser’s executive producers, John Varvatos, Greg Williamson and Nicole Rechter, thanked the Steven & Alexandra Cohen Foundation, which sponsored the event, and the crew, musicians and everyone else who helped organize the event over the past eight months of planning. The organizers also announced that the next Love Rocks NYC will be held at the Beacon Theatre on March 9, 2023. These announcements led to a finale that had most of the evening’s performers (Keith Richards was noticeably missing) return to the stage for an ensemble version of Bob Dylan’s “Like A Rolling Stone.”

Celisse: “Get There” and “Rock and Roll” (Led Zeppelin cover)

Melissa Etheridge: “Come Together” (The Beatles cover) and “I’m the Only One” (with Danny Clinch)

FOR THE FULL REVIEW AND PHOTOGRAPHS BY EVERYNIGHT CHARLEY, CLICK HERE!