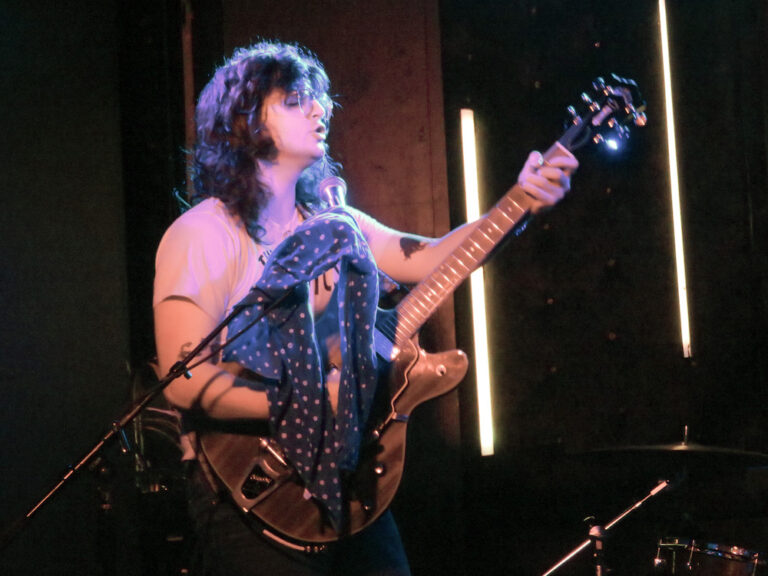 There is something very special about seeing an artist bloom and unfurl into their true selves.

On a chilly Friday in Brooklyn, March 18, I made my way to a quaint venue called The Broadway to see a trio of seasoned musicians and friends make their debut performance together. I hung around as the group set up, which consisted of vocalist and guitarist Dominique Diglio of Baltimore, Maryland, with her roots originating in New Jersey; drummer Dave Motiel of Ocean Gate, NJ; and bassist Kevin Kasinec of Lacey, NJ. Dominique Diglio, a trans-femme artist with three studio records, is a fascinating personality – she is full of life, positivity and character, all of which sizzled on the intimate upstairs stage of The Broadway.

I got to talking with the individual members of the group about their creative process and influences, as this particular band spans many genres, perhaps not to be confined to one particular genre. Dave had a lot to say about what the creative process entails for him, describing it as a spiritual, sacred experience. Naming the projects he involves himself in is an important defining moment for Motiel; the musically inclined company that he keeps is just as important to him as the creation of the music itself.

When they took the stage, Dominique emphasized just how special this appearance was for the trio: Diglio, Motiel, and Kasinec have known each other for just about 15 years, growing up and evolving musically and as people together.

Their performance was straightaway heartwarming and joyous; their obvious chemistry clicked on the moment the first song began. Dominique’s studio work spans from rock and folk to psychedelic, which came together so very well onstage. Everyone knows that small venues can sometimes hamper the experience for show-goers. Acoustics aren’t always ideal and lighting can be challenging. Nothing stopped Dominique from delivering a breathtaking set with pristine vocals along with the glittering tone of her guitar, stand out and interlacing basslines from Kasinec, and unparalleled drumwork by Motiel. The three of them meshed so well together as performers, being incredibly in tune with each other every move they made.

Dominique played a set that spanned the group’s eclectic musical tastes, including songs off of her studio albums as well as impressive and unique covers of some of her biggest musical influences. A stand out moment was their cover of “White Light / White Heat” by The Velvet Underground. Dominique modified the song to fit her superb vocal range, while still maintaining the momentum of the song and jamming collectively in cadence with the original, still altering to fit the vibe of her original music. The performer glowed with passion during “Apparition,” a song that she recorded under her own name on her record Songs for Tara. They played several other of Diglio’s originals, including “Junk,” “Division,” and “Say.”

The music on display at The Broadway spans across two records available for your listening pleasure on Bandcamp under the moniker Holy Gifts, as well the aforementioned Songs for Tara on Spotify, under her own name. Dominique Diglio is currently based in Maryland and she proved on this night that she is a tastefully refined and delightfully sincere performer to seek out on the East Coast.

KEEP UP WITH DOMINIQUE DIGLIO ON INSTAGRAM HERE AND SPOTIFY BELOW!

Transcending Dio: The Man & the Music